Millions of Britons follow the funeral of Queen Elizabeth’s husband 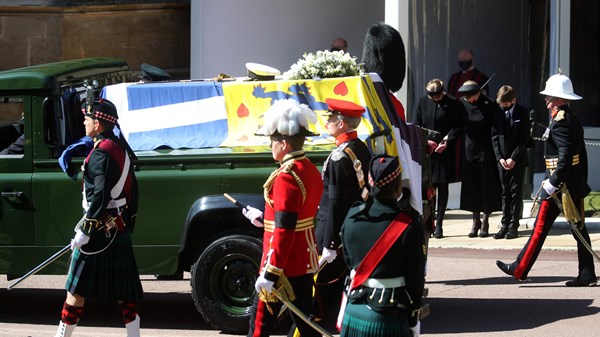 The British watched with great interest the funeral ceremonies of Prince Philip, the husband of Queen Elizabeth II, at the Palace of «Windsor».
The British Broadcasting Corporation (BBC) said that more than 13 million viewers in Britain watched the sad event.
On average, during the hour that the ceremony took, more than 11 million viewers watched the event on the BBC, 2.1 million on ITV and 450,000 on Sky News, according to what the BBC reported. BARB, which specializes in calculating TV viewership rates.
The farewell ceremony of the Duke of Edinburgh, who died on the ninth of April at the age of 99, was also transmitted through many platforms, including the BBC’s electronic pages, which recorded more than 7.5 million views in the world on Saturday morning.
In 2002, more than ten million viewers watched the funeral of Queen Mother Elizabeth Bowes-Lyon, mother of Elizabeth II, while the funeral of Princess Diana in 1997 reached a record level with 31 million viewers.
In 2018, Prince Harry’s marriage attracted 13.1 million viewers on the BBC.
The “BBC” announced Thursday that it had received about 110,000 complaints, a record number, over its coverage of Prince Philip’s death.
The commission had cut its programs to announce the death of Queen Elizabeth II’s husband, at the age of 99. Its TV and radio channels, with the exception of some music stations, have been modified during the rest of the day and part of the next day to provide news coverage and documentaries in honor of the Duke of Edinburgh.

CDU board meeting: Laschet calls for a decision this evening