Milan enter the stage of climbing to the abyss! 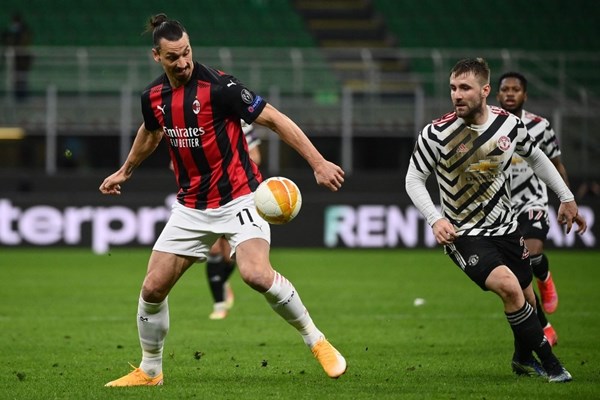 After imposing himself a candidate to win the title for the first time since 2011, and competing for his first title in the “Europa League” competition, Milan finds itself in a difficult situation now, as the soul restores its balance Sunday in front of its host Fiorentina in the 28th stage of the Italian League before everything is lost .
Coach Stefano Pioli’s team enters Sunday’s meeting in Florence in an unenviable situation, after he bade farewell to the “Europa League” competition from its final price stage on Thursday, with a return loss at home 0-1 against Manchester United, thus exaggerating the positive result it achieved in the way outside the stadium. (1-1).
“Rossoneri” added this disappointing exit to the series of negative results achieved in the league, which led to him relinquishing the lead and trailing his neighbor Inter by 9 points, which is moving steadily towards its first title since 2010.
Milan’s exit at the hands of United came Thursday despite the return of its Swedish veteran star Zlatan Ibrahimovic, after recovering from a muscle injury, and he participated in the second half without sparing Pioli’s team out at the hands of his former team.
After Thursday’s disappointment, the 39-year-old seemed determined “to win something” this season, adding: There are still several matches to win and we are currently in second place and we must continue the race to win the league title.
The opportunity will exist for Milan to reduce the difference that separates it from Inter, in light of the postponement of the last match with Sassuolo at this stage due to the many infections in its ranks with the Corona virus.
And talk has begun now about seeking to obtain a qualifying position for the Champions League next season, instead of winning the league title in light of the threat coming from teams such as Roma, Napoli and Atalanta.
Ibra emphasized keeping up, coming back stronger and learning from mistakes. This is part of the success. We have to grow up and think about Sunday “the match against Fiorentina”.
After scoring 14 goals in 14 league matches this season, Sweden coach Jani Anderson decided to use him for the first matches in the qualifiers for the 2022 World Cup, thus returning from his retirement, which he announced five years ago.
But the healing of continental wounds is not limited to Milan, but Italy received another blow this week in the Champions League with the end of Atalanta and Lazio’s campaign at the final price at the hands of Real Madrid and Bayern Munich, the title holder, respectively, to join Juventus, the champions of the league in the past nine seasons, who came out of The same role, while Inter’s career stopped since the first round.
It will be the first time that Italy missed the quarter-finals of the continental competition in five years, while Rome remained its only continental representative by qualifying it to the quarter-finals of the “Europa League” by beating Shakhtar Donetsk, Ukraine, 5-1, on aggregate, home and away matches.
Juventus will be waiting for Milan to dislodge them from the runners-up, since they are only one point behind with a postponed match up his sleeve against Napoli.
Andrea Pirlo’s men are running an easy test on paper on Sunday against their guest Benevento, as they once again count on the brilliance of Cristiano Ronaldo, who responded to all his critics after leaving the Champions League final price at the hands of his compatriot Porto, by scoring a hat-trick in the last stage against Cagliari, raising his score. Top scorers to 23 goals.
And stressed the captain returning from injury, Giorgio Chiellini, the need for solidarity and to show that we believe in the possibility of winning the title until the end.
Atalanta seeks to adhere to its last fourth place in the Champions League next season, when it comes to Hellas Verona on Sunday in a difficult match, realizing that the loss will be costly, since it is only three points ahead of Napoli and Rome, who face Sunday night at the Olympic Stadium In the strongest stage confrontations.