Migrant stories: crossing one of the most dangerous jungles in the world to reach the United States 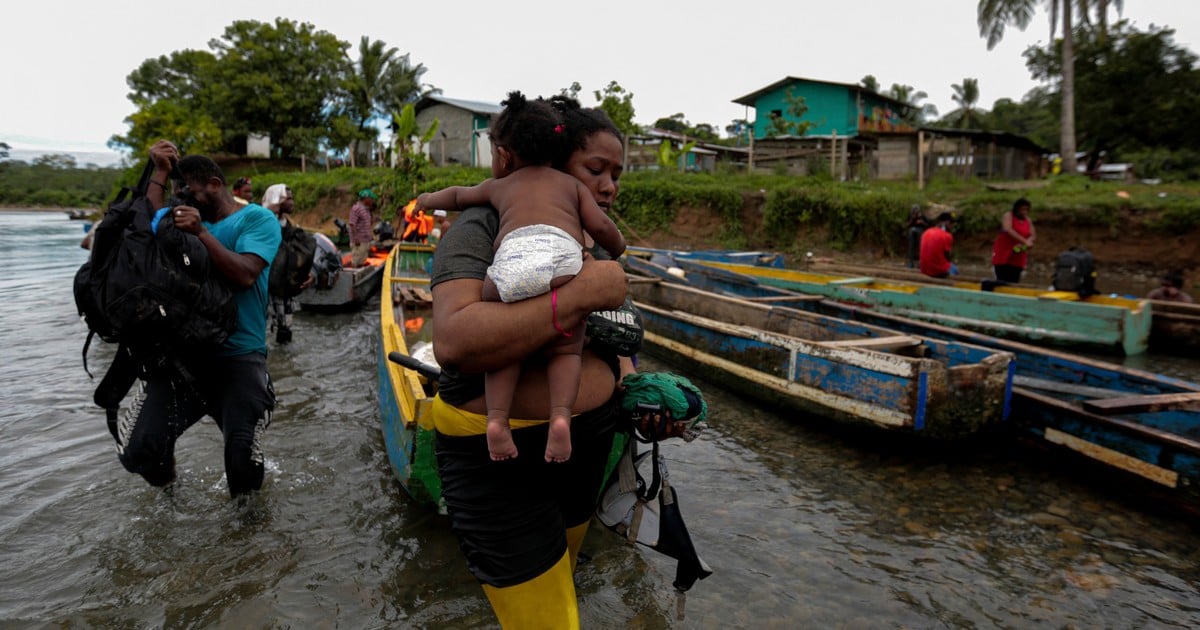 The first thing Moise does when he reaches the Tuquesa River is to submerge himself so that the current cleans it. Won. After walking for five days through the Darien jungle, he reached the Bajo Chiquito village in Panama. Behind come many migrants like him, heading north.

“The journey was very hard because the road is long. There are many dead, people who did not get here. For me it is faith in God that helps us,” says this 29-year-old Haitian man with a Bob Marley style cap.

He and his group finish this last stretch on foot. The night before, while they were still in the jungle, it rained torrentially and they are covered in mud.

Other migrants, with boys in arms and some money, they prefer to board a canoe captained by locals, which brings them closer to the small port of the town.

29-year-old Peter arrives in these boats. He trudges up the jetty, carrying his three-year-old daughter, and steadies himself with one last push.

Migrants with children in their arms wait to get into a canoe and cross the border between Colombia and Panama, in the Darien jungle. Photo: AFP

“Things are like that. You have to do it to find a new life. Things are very difficult for us Haitians. You have to look for things again,” says this man.

Some 580 people emerged last Sunday from the bowels of the Darien plug, 575,000 hectares of vegetation that separate Colombia from Panama. One of the most dangerous routes in the world, according to Unicef.

So far this year, 64,000 migrants have passed through there. Only in August there were 18,000, according to the Minister of Security, Juan Pino. Most of Haiti.

Faced with the endless flow of migrants, the Colombian and Panamanian authorities set quotas of 500 a day since September.

They all flow into Bajo Chiquito, a town of the Embera ethnic group in the Darien province, extreme south of Panama, the first inhabited area they come across after defeating the jungle.

No migrant plans to stay there for long. “I am going to the United States. That is my destiny, there I will be able to fulfill my dreams, a good job”, confesses Moise. A lot is missing.

12-hour hikes and criminals on the prowl

The walks in the jungle go dfrom six in the morning to six in the afternoon. Then they sleep, says Yadira Rosales, one of the few Cubans in the crowd. She travels with her husband José Alberto Reyes and their 5-year-old daughter Adelis.

“We saw five dead. On the way, there were some who were swollen and others I don’t know why they were covered, but you saw the silhouette of the person, apart from the smell, the plague,” he says.

Everyone talks about assaults suffered by organized gangs, murder and sexual abuse. “We ran into some [ladrones] but we were in a herd. They took money from us and let us go. Those who did not bring money had their things checked, “he details.

In the village there is a post of the Ministry of Health that works with Doctors Without Borders (MSF). They perform about 400 daily services.

A group of migrants, mostly Haitians, wait to be taken from the town of Bajo Chiquito to the Lajas Blancas migration post, in the Darien province of Panama. Photo: AFP

“Most injuries are traumatic to the feet, due to the long days of walking and the difficult route. Gastrointestinal injuries, insect bites and cases of sexual violence that we have also treated,” explains Dr. Sofía Vásquez, from MSF.

After registering with Migrations and the National Border Service (Senafront), the pilgrims are surprised to see that they are not in a refuge but a town where everything costs.

There is no electricity, much less internet. It is a fishing and collecting town that readjusted its economic activities to receive the mass arrival of “visitors”.

Most settle on a basketball court in the center of the village, surrounded by shops and lunches for three dollars a plate, which not everyone can afford.

“This year they have gathered a bit and we have prepared to receive them in the community. Shops have been set up, selling food in different places,” says Nelson, a community leader.

Some pipes supplied with water from portable tanks were placed, exclusively for hygiene.

And given the Haitians’ need to connect abroad, the indigenous people offer to send WhatsApp messages for 2 dollars, through a cell phone that captures a signal in a strategic position.

In addition, tens of kilometers away, a villager in the city receives the money transfers via agencies that the migrants are waiting for from their relatives.

Migrants cross the Tuquesa River in precarious boats to reach Panama and continue their journey to the US Photo: AFP

When the money arrives, the villager notifies the region so that they release the equivalent amount, minus the 20% commission.

The passage of children through the Darien has multiplied by 15 in the last four years, according to Unicef. Many arrive dehydrated or with respiratory ailments, due to being exposed to rain and humidity, says Dr. Sofía.

Cuban José Alberto says that his daughter Adelis “is very strong” and “walked a lot.” She smiles, as if it were a walk.

“My heart is like this”, confesses the Haitian Peter, as he moves his left hand up and down at the height of his chest, and holds his daughter with his right. “She felt very bad, bad, bad. It seems that she is sick,” he says.

On the basketball court, the landscape is dominated by boys who run through backpacks, mattresses and the tents that their parents set up to sleep.

When night falls, the full moon is the backdrop to this makeshift camp. The dawn is a concert of whispers and endless conversations. Few fully fall asleep.

From Haiti to Chile and from there to the jungle

Francophones, the majority of Haitians who have just spent the night in the Darien speak Spanish with a strong Chilean accent. They use the “po” for then and say “hit” to the job. They leave Chile, where they have spent the last three or four years working.

Moise Cliff Raymond says he did well in Chile but could never get his papers in order. Others say that lost their jobs due to the pandemic. Edman, 39, explains that he left because he did not want any more abuse or racism.

The journey through the Darien jungle is dangerous, but entire families take risks to find a better destination. Photo: AFP

There are also those, like Jonas Jean, 38, who came from Brazil and speak “Portuñol”. After he was robbed on the way, he was left with only 10 dollars and hopes that a colleague will support him during his stay.

On Monday morning, mist covers the village. The basketball court is empty and the migrants are lining up to board the canoes that will take them, by river, to the refuge in Lajas Blancas. That trip costs them $ 25.

“I hope that God helps us to continue the path to our destination, which everyone knows what it is,” says Edman from the line. There they give him an orange life jacket and warn them not to make sudden movements on the ship. “You know what can happen,” says a boatman.

From Lajas Blancas they will go by land to San Vicente and from there they must pay 40 dollars for a bus to the border with Costa Rica. Next will come Nicaragua, Honduras, Guatemala, Mexico and, finally, the United States. As a song by the Panamanian Rubén Blades says, it is still dark, but it smells like tomorrow.