Miami landslide: Joe Biden will arrive in a city overwhelmed but still hopeful of finding survivors 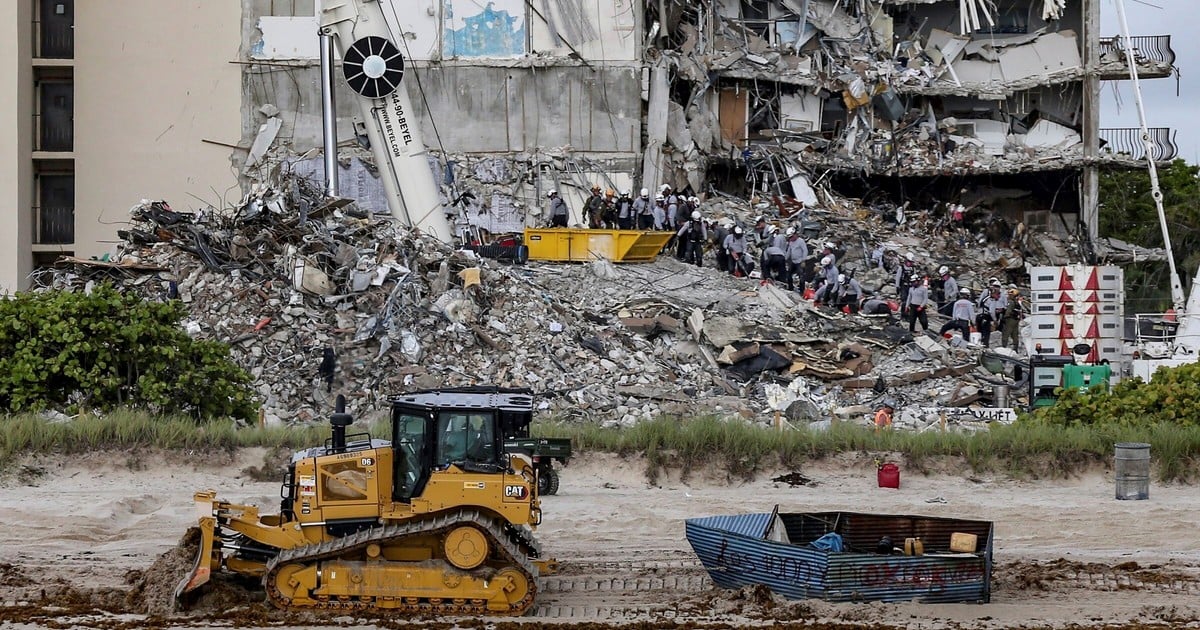 When Thursday marks the first week of that fatal morning, Joe Biden will be next to the rescuers and the relatives of the disappeared in the building collapse in Surfside, Miami. The White House announced that the American president will travel that day with his wife Jill, to offer comfort, encouragement and hope, as the fury and frustration of relatives who observe that the search for their loved ones progresses very slowly.

Until yesterday only 12 bodies had been recovered from the rubble (all already identified) and still 150 people remain missing. It is not that resources or personnel are lacking. There are 210 people constantly working among the ruins of the 55 apartments of the south tower of the Champlain Towers that collapsed at 1.30 on Thursday, when most of its inhabitants slept.

Among the missing are 9 Argentines and from other countries such as Israel, Cuba, Chile, Uruguay and Venezuela. Also among the deceased there are several of Latin American nationality or origin.

Martin Langesfeld He is the brother of 26-year-old Argentine lawyer Nicole “Nicky” Langesfeld, who disappeared in the landslide. During a vigil Monday on the beach near where the building fell, he expressed to the AP agency his hope that there are still survivors. “We are not alone in this. There is hope. I really believe that miracles happen. Things like this have happened all over the world, ”he said.

On the beach, with the landslide behind in Miami. AP Photo

Biden will meet with relatives “who wait with anguish and desolation to hear from their loved ones,” reported the White House, and will visit the site of the collapse With the first lady, you will thank rescuers for their work and ensure that state and local officials have everything they need for their tasks.

The relatives are staying in a hotel a few blocks from the Champlain Towers, on Collins Avenue. They live a situation of tremendous anguish because they feel that the time to find life among the rubble is running out. From the place you see people bathed in tears and also doctors or nurses who enter with stethoscopes around their necks to attend to those who are decompensated.

Surfside Mayor Charles Burkett said Tuesday that he has felt “Frustration” and “rage” when he has gone to accompany them and provide information, although they continue to hope that a miracle will take place.

To keep the flame burning, the official has told them that in 2013 a woman she was rescued alive after spending 17 days under the rubble after an earthquake in Bangladesh.

Miami-Dade Mayor Daniella Levine Cava and Florida Governor Ron DeSantis went to great lengths to highlight that rescuers are “breaking their backs” and doing everything in their power to find. They said that yesterday 210 people were working in 12-hour shifts and that in total there are more than 800 people assigned to the operation. “They are enough and we have the best in the world,” said Levine Cava, thanking Israel and Mexico for their help.

Firefighters they are reviewing “layer by layer” without a rest. They say they are being extremely careful to prevent lifting a piece from dismantling the pile of rubble and blocking any possible air spaces below, where they are still confident that someone might be alive.

In total it has been removed so far with the help of heavy machinery 1.3 million kilos of beams, materials, iron, furniture and objects, which were taken to a shed to be examined. But the task was hampered by heavy rains with lightning, plus a debris fire that produced thick and potentially toxic smoke. Mayor Burkett added another concern for rescuers: Debris is beginning to fall from the part of the building that is still standing.

It is not yet known exactly what caused the collapse. But the fury of the relatives also grows as they reveal that it was already known since at least 2018 that the building had structural problems. At the time, a report by engineer Frank Morabito revealed that the swimming pool deck drained poorly and allowed water to collect, seeping into the concrete slabs of the garage and damaging the columns.

In addition, this Thursday it became known that a few months ago, in April of this year, the president of the building’s owners association had reported that the deterioration of reinforced concrete already detected in 2018 was significantly advanced. (see separate) The mayor of Miami-Dade said the South Florida Prosecutor’s Office is seeking a grand jury to investigate the tragedy and supported the initiative.