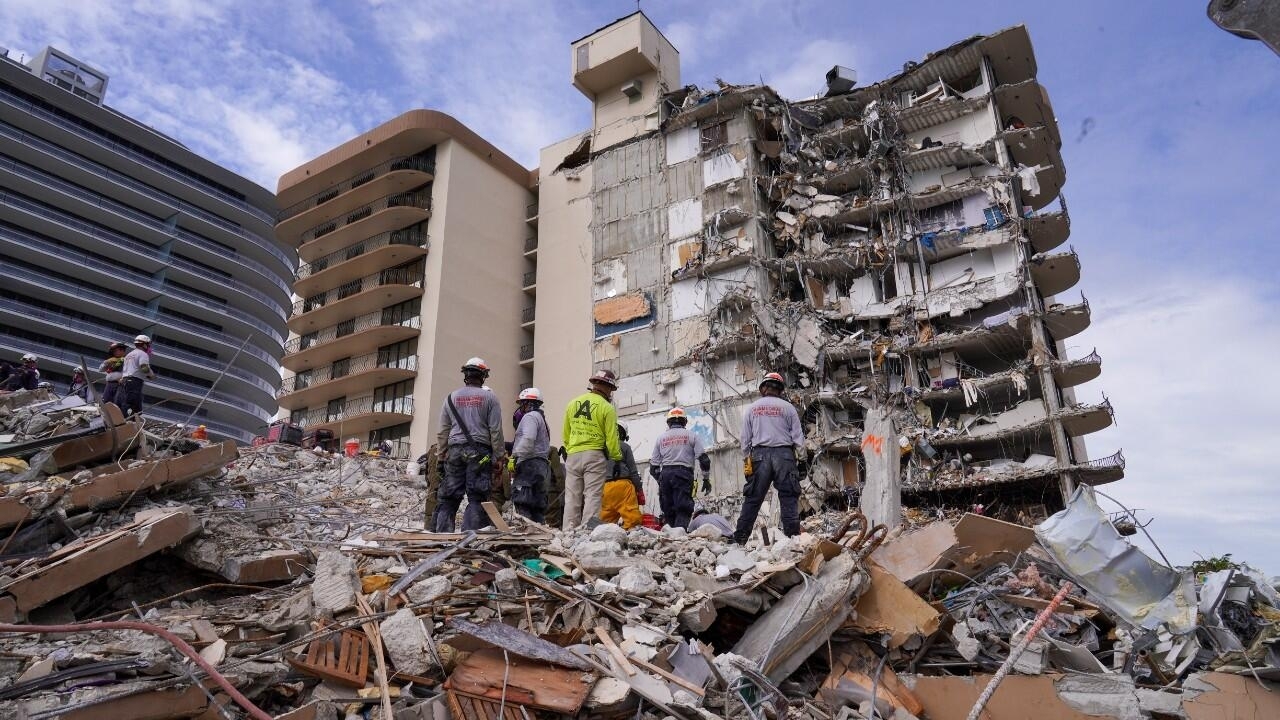 With Tropical Storm Elsa lurking in the Caribbean and forecasts that it will move toward Florida in the coming days, rescuers will knock down the remains of the building that remain standing this Sunday. Meanwhile, search and rescue efforts continue. Two more bodies were found this Saturday, bringing the death toll to 24 and missing persons to 124.

Demolition of what remains of the northeast wing of the Champlain Towers building in Surfside, which collapsed on June 24, should be done as soon as possible, weeks earlier than expected, said Alan Cominsky, the county fire chief. from Miami-Dade, United States.

The official explained that the operation will have to end before tropical storm Elsa hits, which according to forecasts will hit the state on Monday, July 5. “We would have no control of where it falls,” he said.

In a press conference, Florida Governor Ron DeSantis assured that the building is “wobbling” and is “structurally defective”, so demolishing it is the most prudent thing to do, as the structure could collapse on its own dangerous.

“If the building is demolished, this will protect our search and rescue teams, because we do not know when it could fall (…) And, of course, with these gusts, that could create a really severe danger,” he said.

Officials plan to begin demolishing the Surfside condo as soon as Sunday, weeks earlier than expected, as a storm approaches. The death toll rose to 24. https://t.co/cqJ42jWpor


The alarms about a new sudden collapse due to the instability of the building had already been raised last week, something that would endanger crews searching the deepest parts of the rubble. Now, with the climatic phenomenon, the risk is more imminent.

Stability concerns have even curtailed the search in adjacent areas, and failures detected last Thursday led to a 15-hour suspension of all efforts until engineers determined it was safe to resume.

However, the state governor stressed that the demolition, which will be carried out in a controlled manner using explosive charges, will only generate a brief interruption of the search and rescue efforts of those who inhabited the building and have not yet appeared.

Once the demolition is complete, the wreckage will be removed immediately to give rescuers access for the first time to parts of the garage area that are a focus of interest. That could give a clearer picture of the voids that may exist in the rubble and possibly harbor survivors, Deputy Fire Chief Raide Jadallah said.

Florida Gov. Ron DeSantis has declared a state of emergency in parts of the state, including Miami-Dade and Monroe counties, due to potential effects from Tropical Storm Elsa. https://t.co/SYUiOgdVT1


Elsa was downgraded from a Category 1 hurricane to a tropical storm on Saturday, with maximum sustained winds of 110 kilometers per hour, as it passed through the island of Hispaniola, which is home to the Dominican Republic and Haiti.

The long-term forecast shows that it will head towards Florida as a tropical storm, although some models indicate that it could continue towards the Gulf or the Atlantic coast of the United States. Weather authorities warned that it could bring heavy rain and gusts of wind to the Miami area. Governor Ron DeSantis declared a state of emergency in parts of the state.

They find two more bodies and the fatalities rise to 24

Meanwhile, rescuers continue their efforts and on July 3 they found two more bodies among the ruins.

This finding increased the number of people killed to 24 and the number of disappeared went to 124, as confirmed by the mayor of Miami-Dade, Daniella Levine Cava.

No one has been rescued safely since the first hours after the June 24 collapse, although dozens of family members hope that their loved ones are still alive.

Some families had asked to be able to return to the building to retrieve their personal belongings, but they will not be allowed to do so.

“At the end of the day, that building is too unsafe to allow people to go back in (…) I know there are a lot of people who were able to get out, fortunately, they have things there. We are very sensitive to that, but I don’t think there is any way to allow someone to climb into that building given the way it is now, ”DeSantis explained.

The causes of the collapse of the 40-year-old complex have yet to be clarified. A 2018 engineering report found structural deficiencies that are now the focus of investigations.

Meanwhile, authorities confirmed that all residents of another building, Crestview Towers, in North Miami Beach, were informed on Friday to evacuate immediately after engineers found serious electrical and concrete problems, authorities said. The measure was deemed urgent due to Elsa’s approach.