Miami clings to a miracle to find the 159 missing 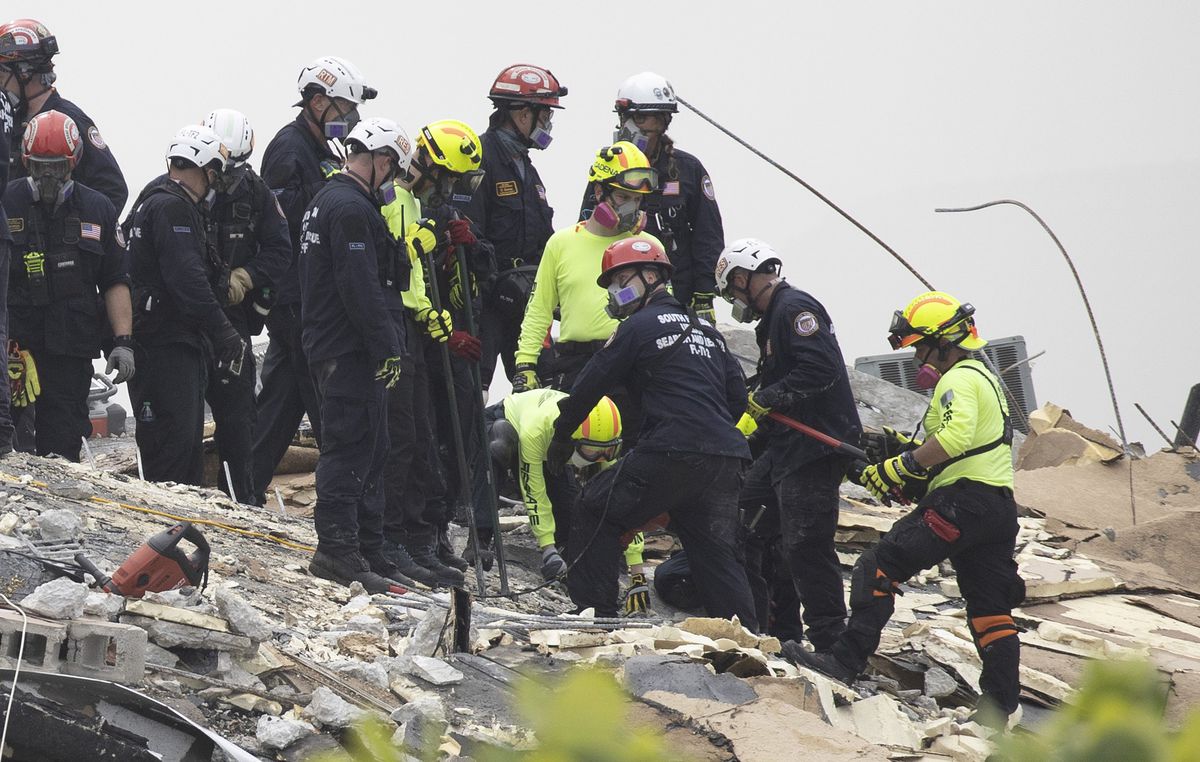 The Miami neighborhood (Florida) where a 12-story residential building collapsed last Thursday has been plunged into a fight against time. Dozens of rescuers and firefighters worked this Friday piecemeal removing debris in search of some of the nearly 160 missing, many of them Latin American. By dawn the authorities had already confirmed four dead, but many more are feared. The minutes in which the rain stops, the eyes sting in the area of ​​the collapse. Smoke makes breathing and visibility difficult. In the family reunification center set up for the sad occasion, the desperation of the relatives increases with the passing of the hours that they do not bring news of their family.

President Joe Biden declared a state of emergency in Florida on Friday, making federal resources available to local authorities to reinforce rescue efforts. The image of the collapse of the building in the middle of the night has spread around the world without the reasons yet being known. Investigating the causes can take months, according to local authorities. Specialized engineers, as well as the Surfside City Administration and the Fire Department, will participate in the investigations. Also scientists from the National Institute of Standards and Technology (NIST, for its acronym in English), a government agency that after the terrorist attacks of September 11, 2001 is authorized to study the structural failures of buildings.

Meanwhile, the anguish spreads. A few meters from 88th Street and Collins Avenue, where 55 of the 136 homes in Champlain Towers South, built in 1981, collapsed, a group of Orthodox Jews gather to pray. In the neighborhood there is a high rate of Jewish population, with several synagogues around the building. Rabbi Sholom Lipskar, one of the organizers of the family reunification center, said late Thursday that several members of his temple are still missing. “I am here to listen [a los familiares], I can’t tell you much. The pain is too great and the plot too complex, “he said at the Surfside Community Center, the epicenter of uncertainty. People hug, cry, pray, and receive the food and coats donated by hundreds of volunteers and neighbors.

A worker from the Federal Emergency Management Agency (FEMA, in its acronym in English) has traveled at noon from the area of ​​the collapse to the Surfside Community Center, where dozens of people await information about the relatives they have not been able to locate. . “We put ourselves at the service of the personal situations of those affected. We assist them in the search for temporary houses and potential funeral services, ”explains the agency official.

Three of the four deceased were identified Friday, according to Dr. Emma Lew, director of the Miami-Dade County Coroners Department. Stacie Fang, 54, was the first fatality identified by the Medical Examiner’s Office. Rescuers took her to hospital, where she died. Her 15-year-old son is one of 127 found alive so far. The senator for Florida, Marco Rubio assured that “almost a third of the disappeared” are foreigners. “We are working with the consulates of several countries in Latin America to help them obtain visas for members of the families of the victims who need to travel to the United States,” said the Republican on Twitter.

At least 36 Latin Americans are among the disappeared, coming, so far as is known, from Argentina, Paraguay, Colombia, Venezuela, Uruguay, Chile and Puerto Rico. The missing persons include Sophia López Moreira, sister of the first lady of Paraguay, Silvana López Moreira, and her husband, Luis Pettengill, along with four other compatriots. More than a hundred firefighters work in the area of ​​the collapse. Miami-Dade Mayor Daniella Levine Cava said that rescue teams are working in a situation of “extreme risk.” “The debris falls on them as they do their work. We have structural engineers on site to make sure they don’t get injured, ”he said.

Spanish Paz Burgueño, 57, was scheduled to travel next month from Madrid to her apartment in the collapsed building. The home he bought with his partner in 2019 was one of those that collapsed. Her daughter starts college in Florida in September and I was going to accompany her to get settled. Since the early hours of Thursday he has been “in shock, completely in shock,” he says by phone. “I think that in 15 days I was going to be there and I’m alive.” He contacted the neighbors he knew and, fortunately, they were unharmed. “People are very shocked, you can’t talk to them much,” he explains. Regarding what is coming, he affirms that it will be seen later if there is any compensation, but that the real drama is the affected families. “Material things are replaceable, lives are not.”

“We hope for a miracle”

The town of Surfside, with a population of 5,800, is an upper-middle-class area. Burgueño comments that it is known as a chic area where an important Argentine community lives. The collapse surprised him because the building in which he had his apartment received “a lot of maintenance, a lot of care”. Together with his family he rented a house in the tower in 2011 and two years ago they bought an apartment that they remotely remodeled from Spain and that, due to the pandemic, and now with the collapse, they could never release.

Alexandria Santamaria, manager of the Champlain Towers building until 2019, told CNN that during her tenure she was never told the building needed immediate repairs or signs of collapse. “It’s a 40-year-old building on the beach, so there was wear and tear,” Santamaría said, adding that the building had been preparing for its recertification process since 2019 and that many engineers toured the property during the process.

Hope that the missing will show signs of life is fading in Surfside. The message of calm from the authorities remarks that those who have not been located may not have been in the flats when they are on “vacation, or for any other circumstance” water falls as the hours go by. Now “we expect a miracle”, repeat the relatives.