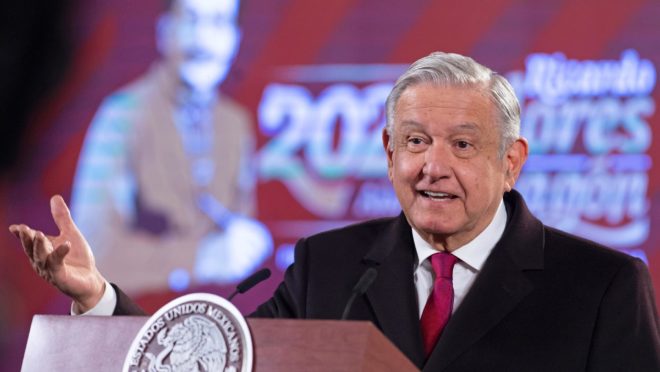 0
SHARES
0
VIEWS
Share on FacebookShare on Twitter
Andrés Manuel López Obrador, President of Mexico, has been diagnosed with Covid-19 for the second time| Photo: EFE/EPA/Presidency of Mexico

The President of Mexico, Andrés Manuel López Obrador, 68, announced on Monday that he tested positive for Covid-19, for the second time in almost a year, in a test carried out after coming down with the flu at the usual daily press conference.

“I inform you that I have Covid-19 and, although the symptoms are mild, I will remain isolated and will only do office work and communicate virtually until I improve”, said the representative in a message on social media.

In early December, the Mexican head of state, who has a complete vaccination cycle, received a booster dose of the AstraZeneca vaccine.

The representative explained that in the coming days, the Secretary of the Interior, Adán Augusto López, will participate in the morning press conferences held from Monday to Friday.

López Obrador, who suffers from hypertension and had a heart attack in 2013, has had this disease before, in January 2021. In the same month, on the 24th, he announced that he was infected and returned to work on February 8th.

See also  Hell, it is of all times and for everyone

On that occasion, the president, always very active, was confined to the National Palace and the health authorities chose to keep his clinical condition a secret, limiting themselves to saying that he was almost “asymptomatic”, which led to all kinds of rumors. .

Later, on 5 February, López Obrador himself announced that he had recovered from the illness, but was awaiting a medical report before reappearing on the 8th of the same month.

The governor received several criticisms from experts and opponents for the management of the pandemic in Mexico. In his third government report, López Obrador boasted of “controlling the pandemic”, even though Mexico has already surpassed 4 million cases and 300,000 deaths, the fifth highest number in the world.

This Monday, the Mexican president showed up at the press conference with flu-like symptoms, a week after he had been in contact with Economy Secretary Tatiana Clouthier, who tested positive on Friday.

Last Friday, López Obrador refused to be tested because, according to him, he had no symptoms, despite the World Health Organization (WHO) recommending otherwise.

Mexico is going through a wave of contagions after Christmas and due to the arrival of the omicron variant. Last Saturday, the country recorded a record 30,671 new cases of covid-19 in a single day. The day before, the mark of 300,000 deaths caused by the disease since the beginning of the pandemic was surpassed.

So far, according to data from the Ministry of Health, Mexico totals 4,125,388 cases of Covid-19, including 300,334 deaths, and has already applied 151.94 million doses of vaccine against the disease.

Motor Bike Expo 2022: all the info on the event dedicated to two-wheel enthusiasts