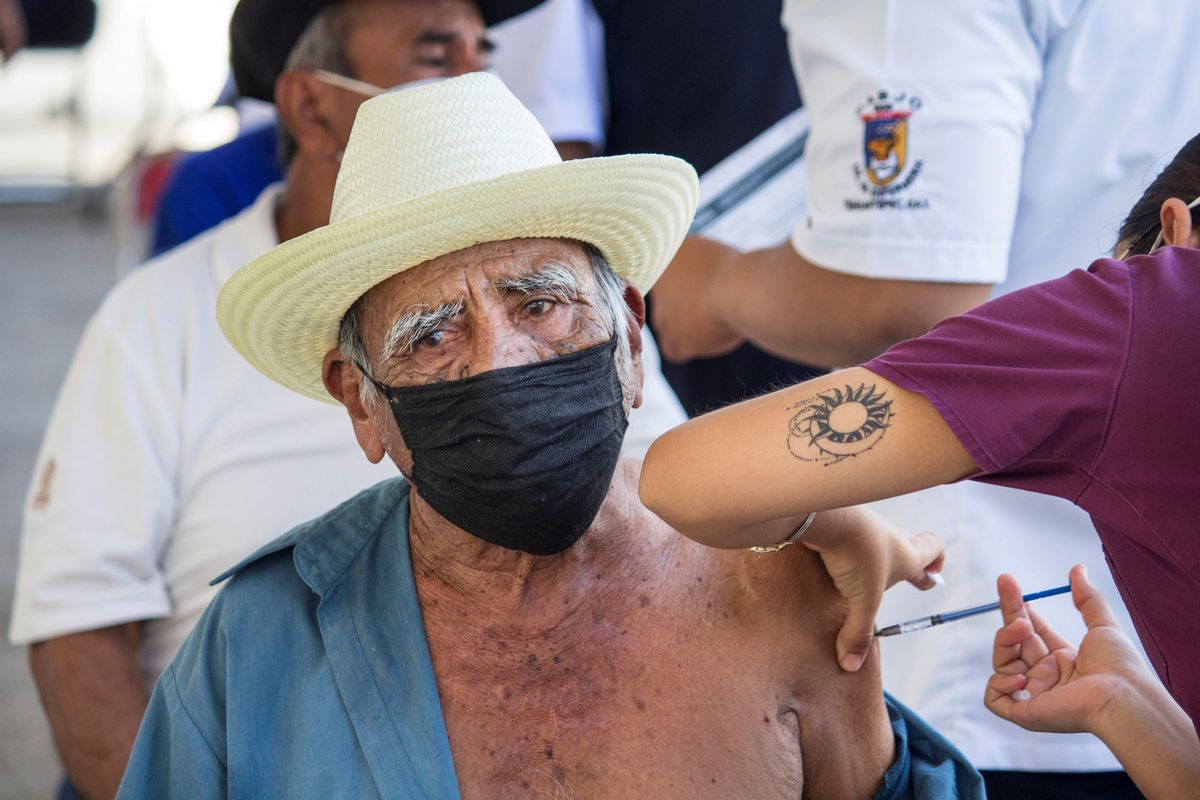 Ómicron has changed the color of the epidemiological traffic light in most of the Mexican territory. The capital and the State of Mexico have been painted yellow, as have eight other states. Another nine entities are already in orange, which indicates high risk, due to the increase in infections and hospitalizations, at a time when the country has chained several records of covid infections in recent weeks and pressure is increasing to the health system. Aguascalientes, one of the regions with the highest hospital saturation and the least availability in intensive care units, is the only one that is in red, the maximum alert level.

The epidemiological traffic light had captured the attention of a good part of the public this Friday. The signaling for the next two weeks, from January 24 to February 6, reflects the progress of the new variant during the fourth wave of coronavirus infections, which has already led the country to have a 39% hospital occupancy rate in general beds , one point more than on the last day. The availability of beds with a fan was also reduced and 23% occupancy is already registered, although it is still far from the percentages observed last summer and at the beginning of 2021. This week the record for infections was broken, with more 60,000 infections in a single day. In the last 24 hours, 49,906 confirmed cases were detected, with which the country exceeded the threshold of 200,000 positive diagnoses in the last four days.

The health authorities announced last week that the National Health Council for Well-being (Conasabi), a technical body headed by the Secretary of Health, Jorge Alcocer, agreed to modify the methodology of the epidemiological traffic light to adapt it to the expansion of omicron. “SARS-CoV-2 changes and adapts, we must do the same to deal with it,” Alcocer said in a statement published on January 14.

The Government, however, has not been very clear about the new weights. The epidemiological traffic light is based on 10 criteria to determine the level of risk in each State of the country: the effective reproduction rate of the coronavirus; the rate of estimated active cases, mortality and hospitalizations per 100,000 population; occupancy of general beds and ventilated beds in hospitals; the weekly percentage of positivity of the virus, and the trends of infections, serious cases and deaths per 100,000 inhabitants.

Claudia Sheinbaum, head of the Government of Mexico City, explained at a press conference that the new criteria seek to give greater weight to hospitalizations and less to the increase in cases, although she did not dare to advance the color of the traffic light according to this methodology as they did. their counterparts in the State of Mexico and Quintana Roo. The Ministry of Health limited itself to publishing the update, which arrived more than three hours late, without giving an explanation of the epidemiological situation of each state. The new guidelines are also not up to date and the official website maintains the criteria that were updated last August. Conasabi has also not updated its official page and states that its last meeting was in March 2021, nine months ago.

The epidemiological traffic light has been criticized by several specialists, who have accused that the health authorities have not been clear and have even not reflected the real impact of the pandemic for political reasons. “It’s a simulation,” said Arturo Erdely, actuary and doctor of Mathematical Sciences, in an interview with this newspaper last July. “The population realized from the beginning that the traffic light was going to be the color that the government wanted,” he added.

With the changes approved by Conasabi a few days ago, the health authorities recognized the need to change this tool in order to have more effective communication with the population and to be able to react more quickly, especially with regard to serious cases that require hospitalization. The results with the new methodology, however, came before the explanations about the changes made. However, the Sheinbaum government, for example, has insisted that closures and stricter confinement measures that could deepen the economic impact of the pandemic are ruled out. At a yellow traffic light, at least according to the parameters that still appear on the government page, the capacity of economic and social activities is limited to 75% and the use of face masks is mandatory in closed public spaces, although the authorities do not contemplate fines or measures drastic to monitor that the masks are worn.

The country also confirmed 331 deaths from covid and has already accumulated 302,721 deaths since the start of the pandemic, according to official data. Health authorities have recognized underreporting and, according to various official estimates of excess mortality, the actual number of deaths exceeds half a million. The epidemiological traffic light indicates, in any case, greater caution in the face of the impact of omicron: only 12 states remain green, while two weeks ago they were 19 of the 32 entities in the country.

Cafe in Kazakhstan was closed during the explosion

Ukraine, escape from the Donbass