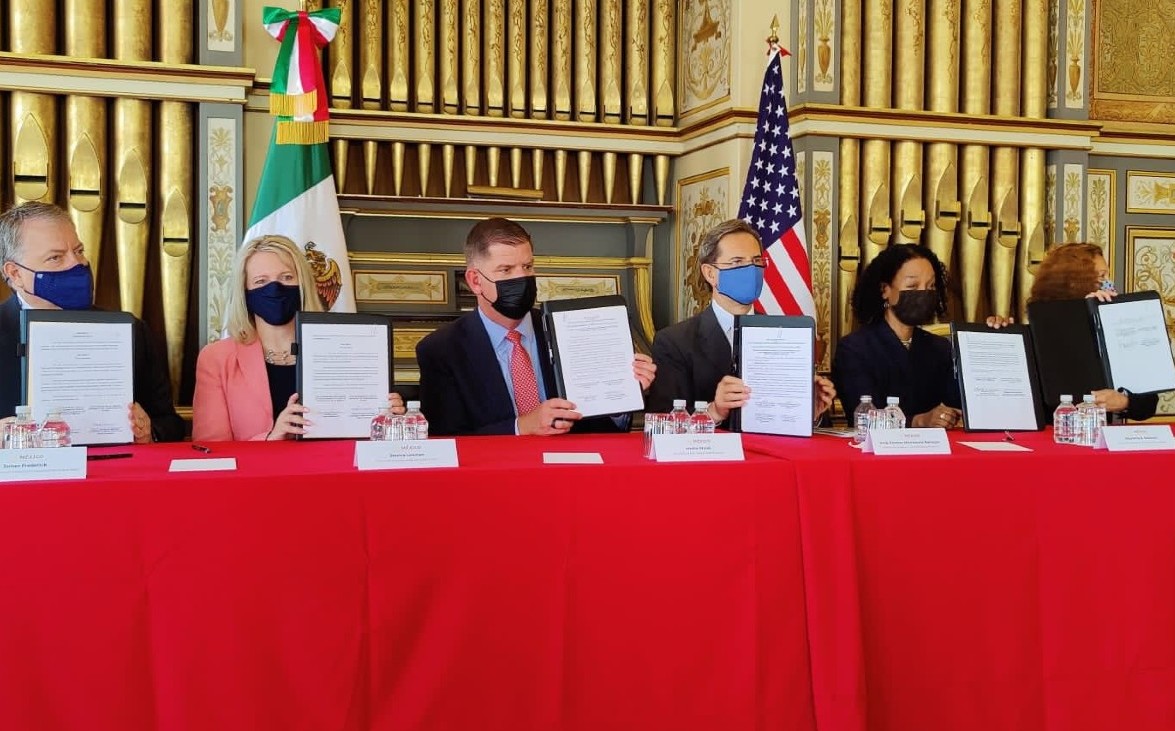 Mexico and the United States this Thursday renewed the collaboration agreements for the protection of the rights of Mexican migrant workers working in that country.

The Mexican Ambassador to the United States, Esteban Moctezuma, and the United States Secretary of Labor (DOL), Marty Walsh, led a ceremony held at the Mexican Cultural Institute in Washington where they signed legal instruments for take care of the rights of Mexican migrant workers.

The signing of these agreements included a joint declaration in which both governments expressed their intention to continue strengthening their cooperative relations to promote a better understanding of US labor laws and practices among Mexican workers and their employers.

“Work together to improve the awareness of Mexican workers about the labor laws and regulations applicable to Mexican workers and their employers in the United States; collaborate with each other and with other relevant government agencies and private organizations as appropriate and as mutually decided by our two governments ”, says the document signed this Thursday to which MILLENNIUM had access.

In addition to the above, agreements were renewed with the DOL Occupational Health and Safety Administration and the Wage and Hour Division, the National Labor Relations Board and the Equal Employment Opportunity Commission, it was informed.

In his speech, Moctezuma stressed that “providing legal security and protection to migrant workers is one of the main priorities of President (Andrés Manuel) López Obrador. Thus, we are committed to building lasting alliances with valued partners to fight abuse and illegal practices. We are deeply grateful for the renewal of these agreements ”.

We promise that Mexican workers know their rights: Walsh

For his part, the United States Secretary of Labor said that during the signing of the agreement he had present all the essential workers of Mexican and Mexican American origin who work in his country and that by taking a great personal risk they helped keep their country safe, healthy and fueled during the covid-19 pandemic, which It has been causing a health emergency around the world for more than a year and a half.

“Today we renew agreements that help ensure that all workers in the United States have the right to full payment of their wages and a safe place to work. We are committed to ensuring that Mexican workers know their rights and employers know their responsibilities according to US law, “Walsh stressed.

The event took place during the celebration of the 13th Labor Rights Week for create awareness and inform the Mexican and Hispanic communities in the United States about labor rights most fundamental of workers.

LWR includes a series of events and activities carried out by the consular network of Mexico in the United States, in alliance with government agencies, civil society and other relevant actors.

The president of the Equal Employment Opportunity Commission (EEOC), Charlotte Burrows, also participated in the event. This agency of the US federal government is in charge of enforce laws against discrimination in the workplace.

“Today’s agreement with Mexico consolidates the EEOC’s commitment to ensuring that migrant employees, regardless of their immigration status, understand that they are protected by our laws. They have the right to be treated fairly and without discrimination at workBurrows highlighted.

The ceremony was also attended by the general advisor of the National Labor Relations Board (NLRB, for its acronym in English), Jennifer Abruzzo, who agreed that the signing of these agreements demonstrates “the great will and commitments of both governments to protect the rights of migrant workers ”.