‘Messi banquet’ puts Barcelona under the ‘guillotine of sanctions’ 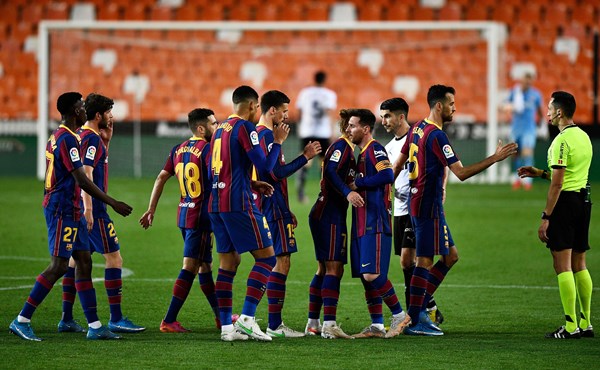 The Spanish League “La Liga” has opened an investigation about a lunch hosted by Lionel Messi for his teammates at his home, due to the violation of the Corona virus protocol, as the protocol stipulates that there are only 6 people in the players’ gatherings outside the club, while 40 people were together in the house of the “flea”.

Lionel Messi made a well-received initiative when he hosted his colleagues at his home for a lunch to celebrate the victory over Valencia and raise morale before the strong confrontation of Atletico Madrid next Saturday in the “La Liga”. The Spanish newspaper “Sport” revealed the details of the lunch, and published photos of the players while heading to Messi’s home in Barcelona, ​​and indicated that it was set up in a very friendly and positive atmosphere among the players with their pledge not to waste any points in the remaining matches in the “La Liga”.

Some fans circulated old footage of Messi while he was cooking as a humor to portray him as the one who prepared lunch for his colleagues during the banquet, as part of explaining his role in the team reunion, after the meeting over lunch became a tradition of discussions in Barcelona, ​​where Laporta, the club’s president, had discussed The new decade of “The Flea” with his father, Jorge Messi, during their lunch together last week.

Barcelona will be required to win only against Atletico Madrid on Saturday at the Camp Nou stadium, in case they want to stick to their fortunes and wait for Real Madrid, who meets Sevilla in another strong match within the same round, and Atletico Madrid top the “La Liga” ranking with 76 points, followed by Real Madrid and Barcelona with 74 points. A point with only four matches left, and Atletico excels in direct confrontations after beating Barcelona in the first leg.

Puado, from pumpkins to Madrid to a priority renovation