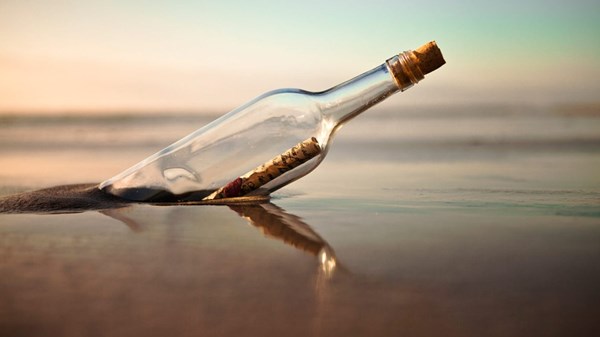 Since the ancient Greeks began the custom of throwing bottles into the sea in the 3rd century BC to study water currents, more than six million messages are believed to have been placed in bottles and thrown into the ocean.

This tradition returned to the fore after a number of sites circulated the story of a Scottish schoolgirl’s letter in a bottle, when she was eight years old, when she threw it into the sea in 1996, and it was recently found 800 miles away in Norway, after 25 years.

With the emergence of this funny story, the British “Daily Star” website published a set of messages that were thrown into the sea, and their stories aroused wide interest.

In 1784, Japanese sailor Chunosuke Matsuyama and 43 others drowned on an island in the South Pacific. He carved a message on a piece of coconut wood, put it in a bottle, and threw it in the hope of getting help.

See also  Covid Switzerland, net increase in infections and deaths in a week

Unfortunately, they were never rescued, but the bottle was found in 1935, thrown into waves in the village of Hiratorimura in Japan, the birthplace of Matsuyama.

Swedish sailor Loflorn Ak Viking put a message in a bottle in 1956 “for someone beautiful and far away.” Two years later, he received a letter from a Sicilian girl named Paulina, in which she wrote: “I am not beautiful, but it seems to be a great miracle that this little bottle should have traveled so far to reach me, and I must send you an answer.” The duo eventually got married.

During a 1979 cruise to Hawaii, Americans Dorothy and John Beckham threw a bottle from the ship with a note inside asking whoever found it to write a response. In the end they retrieved a note from the Vietnamese man Hoa Van Nguyen. He picked up the message 9,000 miles away, while on a small boat trying to escape the country’s communist regime. He told the Beckhams that the discovery gave him the strength to move forward and later settled in the United States with the help of the couple.

The wonders of world war

When fisherman Steve Joan was on a fishing trip in 1999, he found a ginger beer bottle off the coast of Essex, and inside it he found a love letter written in 1914 by Private Thomas Hughes to his wife Elizabeth. Hughes had dropped it in the English Channel while traveling to the Western Front in France but was tragically killed just two days later. But Steve insisted on delivering the message to the owners, even though it dates back to the First World War, which means that the wife died. Indeed, he was able to return the letter to their daughter Emily, who was only two years old at the time the letter was written by her father.

In 2002, a friend of writer Karen Liebrich found a teardrop-shaped bottle on a beach in Kent. Inside was an anonymous letter from a French woman, to her 13-year-old son, who had died. Karen wrote a book about this story and later met the mother, according to RT.

See also  Football According to Chelsea's head coach who dropped out of the Champions League, Korona influenced the game: "The situation is the same everywhere in football"

Before he perished, when the Titanic sank in 1912, 19-year-old Irishman Jeremiah Burke put a note in a bottle of holy water given to him by his mother and threw it into the sea.

It read: “From the Titanic, goodbye, everyone. Burke, from Glanmaye, Cork.” The letter was found a few months later and washed up again on the Irish coast.