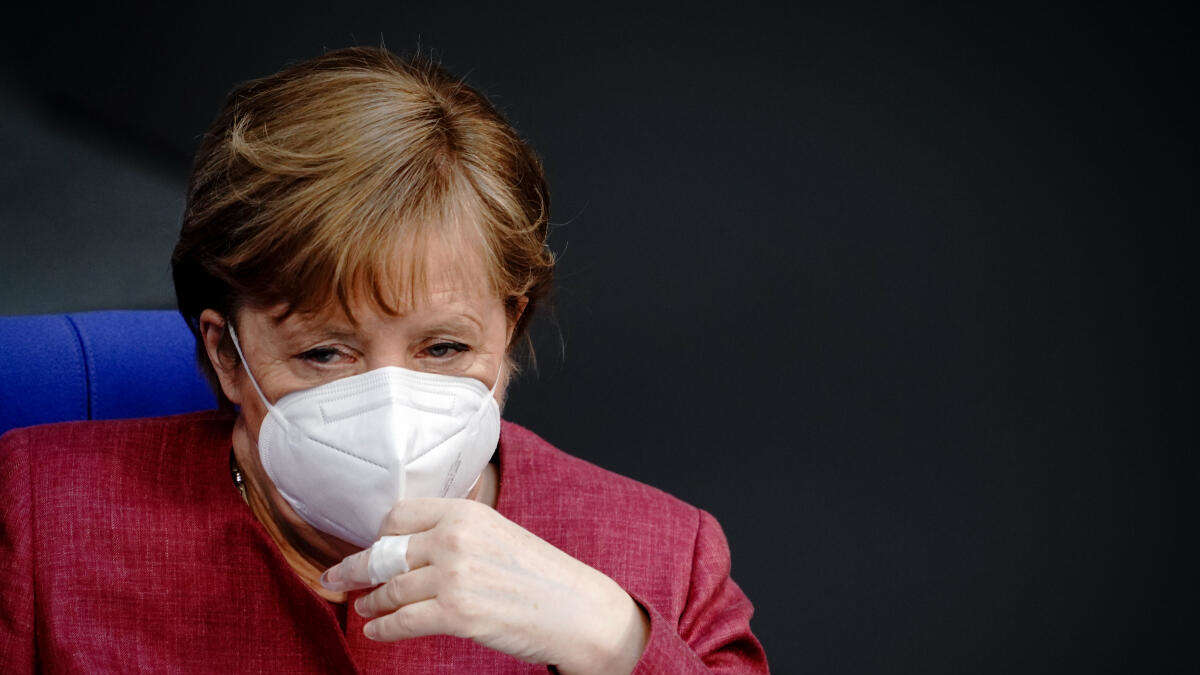 Chancellor Angela Merkel wants to use the Corona emergency brake to ensure uniform nationwide rules. But the resistance is great. That is why there are apparently innovations.

Update from April 19, 11.25 a.m .: Apparently, the Union and the SPD have agreed on changes to the Infection Protection Act in the Bundestag. This reports the world. The nightly exit restrictions should therefore only apply from 10 p.m. to 5 a.m. instead of 9 p.m. if the incidence value in regions is over 100 for three days in a row. However, from 10 p.m. to midnight it should be possible to go for a walk or jog alone.

Schools are another point of contention: This is where a new number seems to come into play: Loud world should become compulsory from an incidence of 165 distance learning, no longer as originally planned from 200. In addition, the Bundestag should in future give its binding consent if the federal government wants to impose further measures within the framework of a federal ordinance. According to the information, the emergency brake regulation will automatically expire on June 30th. A statement from SPD parliamentary group leader Rolf Mützenich is planned for 1 p.m.

Update from April 19, 11:10 a.m .: There is still no agreement on the Infection Protection Act in the Bundestag. But this week will be crucial (see first report). The night-time exit restrictions are a major point of discussion. The FDP has already threatened to take legal action before the Federal Constitutional Court. But not at any price. She wants to forego a constitutional lawsuit against the nationwide emergency brake if certain conditions are met in the legislative process. The sovereignty of the states in educational issues should be respected and the planned curfews eased, said FDP General Secretary Volker Wissing the newspapers of New Berlin editorial company.

The measures should not only be tied to the bare incidence, said FDP parliamentary director Marco Buschmann world. In addition, there must be exceptions for people who have been vaccinated and tested. In addition, the Federal Government’s authorization for ordinances on further measures must be linked to genuine approval by the Bundestag. “If the grand coalition refuses to make these changes, we will be forced to go to Karlsruhe,” said Buschmann.

Corona emergency brake: Bundestag parliamentary groups from CDU / CSU and SPD are talking about changes to the Infection Protection Act

Update from April 19, 6.45 a.m.: It could be the crucial week: The deliberations on a nationwide emergency brake will continue on Monday. The CDU / CSU and SPD parliamentary groups will speak in video conferences at 11.30 a.m. about changes to the Infection Protection Act. Parliament discussed the government’s draft last week and will vote on it on Wednesday. At the weekend there were still negotiations between the coalition factions about final changes.

There had been a lot of criticism, especially from the FDP. It was even threatened with a constitutional lawsuit. Secretary General Volker Wissing now named conditions under which the FDP would forego this. “We want to get a better law,” he told the partner newspapers of the Neue Berliner Redaktionsgesellschaft. For this it must be subject to approval in the Federal Council and respect the sovereign rights of the states in education issues. “Inadmissible encroachments on fundamental rights” such as curfews should also be deleted. “That would be a viable option for us,” said Wissing.

Hamburg’s First Mayor Peter Tschentscher (SPD) spoke out in favor of restricting freedom of assembly. in the picture-Political Talk “The right questions” he said on Sunday: “It would make sense if the federal government explicitly included in the Infection Protection Act that the right of assembly can be restricted here as well as other basic rights.” Even if freedom of assembly is a high and worthy of protection It is good: With the breakup of large demonstrations like in Dresden and Leipzig, “one overtaxes the police,” said Tschentscher.

Merkel’s Corona emergency brake: is there a threat of tightening school closings before the decision is made?

Update from April 18, 4:18 p.m.: Open schools or not? The emergency brake regulation also has an impact on this question. In many parts of Baden-Württemberg, for example, the Corona emergency brake is currently stopping the school openings planned for next Monday (April 19) for all children and adolescents. In 11 of 44 urban and rural districts alone, schools will largely remain closed because they have either been three days above the incidence of 200 or are about to do so. In corona hotspots with recently over 200 new infections per 100,000 inhabitants: inside a week there should only be distance learning. This regulation could now be tightened even further.

Because although the emergency brake has not yet been decided by the Federal Council and the Bundestag, the area of ​​schools could already be tightened. According to a draft of the Union, schools should not only close from the previously applicable seven-day incidence of 200 cases per 100,000 inhabitants. According to information from Reuters, the Union insisted on this from coalition circles. This was preceded by criticism from experts that a closure from an incidence of 200 or more would be too late.

Update from April 18, 11 a.m .: The criticism of the government’s new federal emergency brake continues. And it also comes from the grand coalition. Rolf Mützenich railed against the curfew. “It must be possible for adults to stretch their legs despite all the restrictions,” explains the SPD parliamentary group leader in the Picture on sunday. He also demands: “Children must be able to play sports in small groups. Especially since we know from experts that the risk of infection outside is many times lower than in closed rooms. “

However, the party is fundamentally behind the new Infection Protection Act, because it is now “important that we do not give up on the last few meters and continue to adhere to the rules”. Since the resolutions of the Prime Minister’s Conference had not been implemented, it would be “necessary for the federal government to intervene and ensure largely nationwide uniformity”.

Mützenich also used the opportunity to criticize the Union, which has got stuck in the dispute over the candidacy for chancellor. “It is really frightening what our coalition partner is up to,” complains the social democrat: “Day after day, the CDU and CSU frivolously mess around with their internal dispute over power and vanity instead of worrying about the important things.” Therefore, he urges the Union faction to do so on “that she puts her priority on fighting the pandemic and that the law passes with us in the coming week”.

Berlin – Chancellor Angela Merkel addressed the members of the Bundestag on Friday with haunting words. She called for a hurry: “Every day earlier that the emergency brake is applied nationwide is a day won.” But the planned law continues to cause heated discussions. The curfew in particular causes displeasure.

A heated exchange of blows about the planned Corona emergency brake raged in the Bundestag on Friday. Merkel spoke of bottlenecks in intensive care units, for example in Cologne, Bremen and Berlin. But it is not yet clear whether the law in its current form will really come into force. The law is to be passed in the Bundestag on Wednesday. Shortly afterwards, the Federal Council is to cast its vote.

The AfD and the Left have signaled a general rejection of the federal plans. The FDP believes that nationwide action is necessary, but still threatens a constitutional complaint because of the planned exit restrictions from 9 p.m. And the planned school closings from an incidence of 200 are also causing discussions. For many, such as Green Party leader Katrin Göring-Eckardt, this limit comes too late.

Federal Minister of Economics Peter Altmaier has meanwhile clearly spoken out in favor of the consistent application of the planned curfews. This was “a signal for the drama of the situation,” he said Frankfurter Allgemeine Sonntagszeitung. “Everywhere in the world where a wave of infections has been successfully broken, this has been achieved with the instrument of a hard lockdown *,” continues Altmaier. In his opinion, the alternative would be “the complete overload of the health system, with tens of thousands of additional deaths”.

With the law, there should be nationwide regulations for corona measures in the future. If the number of new infections per 100,000 inhabitants within seven days in a city or a district exceeds 100 on three consecutive days, shops have to be closed and exit restrictions apply from 9 p.m. Schools should no longer be allowed to offer face-to-face classes with a value of 200 or more. So far, such measures have been the responsibility of the federal states. The Federal Government initiated the renewed amendment to the Infection Protection Act as a result of the failure of the so-called Easter rest period.

The debates continue for the time being. The current schedule for the emergency brake:

Despite the ban, “lateral thinkers” gather in Stuttgart - without any distance, without masks

Urban planning Helsinki is planning a completely new look for Teollisuuskatu: “Light rail, jobs and additional construction could come to the“ downtown area of ​​the future ”