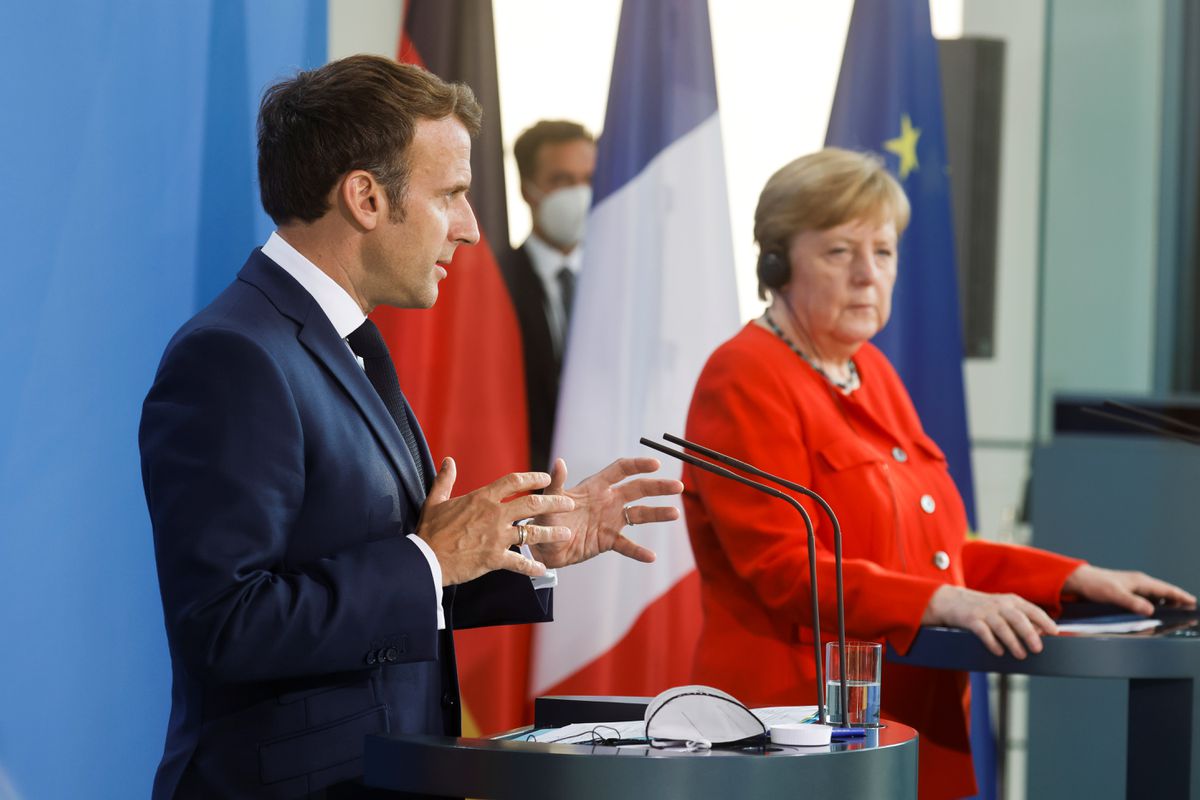 France and Germany seek a European path in the cold war between Washington and Beijing. French President Emmanuel Macron and German Chancellor Angela Merkel met on Monday by videoconference with Chinese Head of State Xi Jinping to relaunch cooperation after months of disagreements.

Europeans have aligned themselves in recent weeks with the Joe Biden Administration’s criticism of human rights in China and its alleged aggressiveness in the Asia-Pacific region. It was time, for the two engines of the European Union (EU), not for a correction – as neither Macron nor Merkel deviated from positions on China at the G-7 and NATO summits in June – but they did. to mark an own approach and different from that of the United States, more belligerent before the Asian power.

It was the third meeting by videoconference between Merkel and Macron, on one side, and Xi on the other, in just over half a year. The meeting should serve to seek common ground after weeks of tensions and set a cooperation agenda without ignoring the issues that separate them. First, the accusations against Beijing, by the US and the EU, for the treatment of the Uighur minority in the Chinese province of Xinjiang.

“The President of the Republic and the Chancellor of the Federal Republic of Germany,” said the Elysee statement, “have shared the serious concerns regarding the human rights situation in China and have recalled their demands regarding the fight against forced labor ”.

It is just one sentence, and the last one, of a text that reviews the issues on which cooperation between both parties can develop: from climate change, where China is an essential partner, to efforts to reestablish air connections after a year and a half of pandemic.

The leaders spoke, according to the Chinese news agency Xinhua, about what Xi described as an “opportunity”: the initiative known as the New Silk Road, a network of infrastructure by land and sea with which Beijing wants to connect with the rest of the world. The Chinese president’s calls to take advantage of this initiative came a few weeks after the G-7 – in which China does not participate – agreed to develop an alternative to the project governed by democratic principles.

Xi proposed the creation of a four-way platform – China, Germany, France and Africa – to develop the African continent, where Chinese strength erodes European influence. Macron urged the Chinese leader to consider greater debt forgiveness for countries in that region, while Merkel indicated that Germany would seriously consider the Chinese proposal.

The videoconference agenda, announced a few hours in advance, was highly technical; the background was geopolitical. It is about defining the place of Europe between the United States of Joe Biden and the China of Xi Jinping. In this three-way chess game, Washington tries to line up the Europeans as close to their position; Beijing intends to drive them away.

At the G-7 summit in the UK in June, the old industrial powers called for an investigation in China into the origins of the covid-19 virus; they demanded that Beijing respect human rights and freedoms in Xinjiang and Hong Kong; and declared themselves “deeply concerned” by “the unilateral attempts to alter the status quo and increase tensions ”. A few days later, NATO leaders claimed that China’s “declared ambitions and resolute behavior present systemic challenges to the rules-based international order and in areas important to the security of the Alliance.”

By then, the relationship between the Twenty-Seven and the world’s second largest economy had already become rarefied. In March, Brussels had imposed its first sanctions on China since the arms embargo following the Tiananmen massacre in 1989. In punishment for what it considers serious human rights violations by Beijing against the Uighur minority in the Xinjiang region, the EU added four Chinese leaders and one entity to its blacklist.

The Xi government responded immediately and amply, sanctioning ten individuals and four entities. And in May, the European Parliament froze the ratification of the investment agreement that the two blocs had finished closing five months earlier, in December 2020, after seven years of arduous negotiations.

In the videoconference on Monday, according to the CCTV network, Xi urged Macron and Merkel at the meeting to play a greater role in international issues and to demonstrate “strategic independence.” In Beijing’s diplomatic parlance, it means making decisions independently of Washington.

Where will Europe stand in a world dominated by two powers in tension, the United States and China? Is there a middle way? Or should the Europeans act as a bloc with their western ally? Macron, in a colloquium at the American think tank Atlantic Council, last February, drew two possible scenarios, in his opinion, and both negative. “In the first,” he said, “we would find ourselves in a situation where we all unite against China.” According to the French president, the alignment between the US and the EU with China “would be counterproductive”, because it would push China to act on its own and decrease cooperation.

But Macron also rejected Europe’s equidistance between the two powers. “It doesn’t make sense, because we are by no means a systemic rival to the US We share the same values, the same story. And we face challenges to our democracies, “he said.

Beijing hardens the tone on the international scene

Beijing has adopted an increasingly assertive discourse on the international stage, with a hardened tone regarding the beginning of the pandemic. On July 1, on the occasion of the centenary of the Communist Party of China, President Xi Jinping delivered a strongly nationalist speech from the Tiananmen Gate, where Mao Zedong proclaimed the birth of the People’s Republic in 1949. Then, the president Chinese warned that countries that tried to dominate his “would crash in a bloody way against a wall of steel built with the flesh and blood of 1.4 billion Chinese.”

Its Foreign Minister, Wang Yi, echoed the words of its president this weekend, warning at an international forum in Beijing that “no individual or force should underestimate the determination and ability of the Chinese people to defend sovereignty, the security and development of this country ”. “China is no longer the country of a century ago,” he stressed.

In the same forum, the EU ambassador in Beijing, Nicolas Chapuis, lamented that China’s attitude is no longer just assertive, but is becoming aggressive, “much to our regret.” “Effective multilateralism implies that all nations, large and small, sit at the same table with the same rights, and, more importantly, accept the opinions of others in a tolerant and constructive way,” added the European representative.