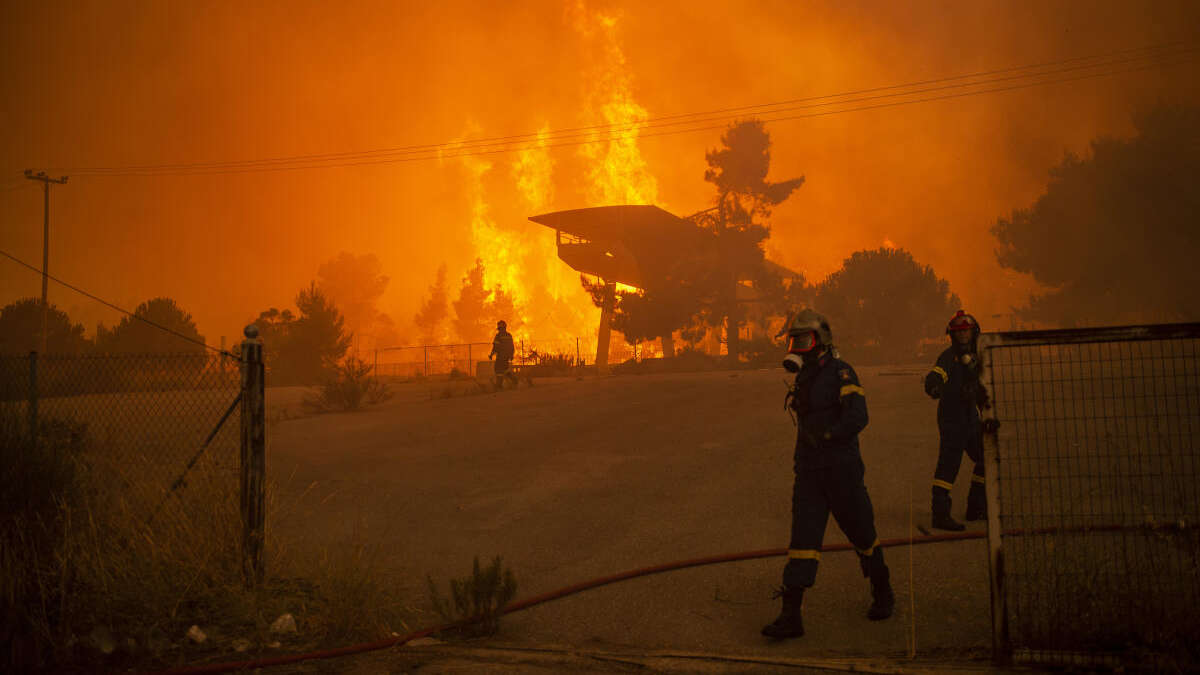 All night long, flames, sparks and smoke rose up in Greece. The people are stunned and hopeless, because the heat and drought are supposed to continue.

Athens / Istanbul – The forest fires in Greece * and Turkey * continue unabated. On Friday night, too, fire rollers made their way through dried up forests, bushes and grasslands. The Greek Prime Minister Kyriakos Mitsotakis swore the citizens for more tough days – among other things, it burns near the capital Athens. In Milas, western Turkey, the flames have recently moved dangerously close to residential areas again, according to local authorities. The first quarters were evacuated late Thursday evening.

“Of enormous proportions”: Dozens of forest fires in Greece

“We have to fight dozens of forest fires. Three of them – in Athens, the Peloponnese and Euboea – are enormous, ”said Mitsotakis on Thursday evening in a speech on state television. He warned of strong westerly winds on Friday, an “unprecedented condition because the past days of heat and drought * have turned the country into a powder keg”. There were 54 active fires across the country on Thursday evening. Therefore, people are not allowed to visit forests until at least Monday. Work that could generate sparks or flames is also prohibited.

In Athens, the electricity company shut down a large distributor in the region as a precaution. The company announced that it would locally interrupt the electricity in Athens on Thursday evening in order to be able to maintain the overall supply. North of Athens, the highway between the capital and Thessaloniki was closed on Thursday evening; a short time later the flames jumped over to the other side of the lane. The village of Krioneri was evacuated, as was a refugee camp. There were also several new sources of fire on the second largest Greek island of Evia, which is heavily forested. Church bells rang the alarm, residents fled or tried to cut aisles with tractors and chainsaws to keep the flames from moving.

Turkey is fighting fire: emergency services have not been able to get a grip on fires in holiday regions for days

In Turkey, too, the forces continue to fight the flames. According to official information, 13 fires in six provinces were not yet under control on Thursday evening. The holiday regions of Antalya, Marmaris and Bodrum are particularly affected, where the emergency services have not been able to get the fires under control for days. The residents are desperate and hope for rain – but the next few days will also be extremely hot. In Bodrum and Milas in Mugla province, more than 40 degrees are expected on Friday. Foreign Minister Mevlüt Cavusoglu, who has his constituency in Antalya, made some hope on Thursday evening: The wind will decrease in Antalya on Friday and it is hoped that the fires there will be brought under control.

Thousands of people have already had to leave their homes and some have been accommodated in schools and sports stadiums. The authorities keep circulating lists of things that are needed: cutlery, plates, pillows and blankets – the need is great.

The fire has already devastated large areas. Eight people were killed, and it is estimated that at least 100,000 hectares of forest and fields fell victim to the flames. These are the worst forest fires in Turkey for more than 13 years. (dpa / cibo) * Merkur.de is an offer from IPPEN.MEDIA.