Mendoza: the teachers of the risk group who are vaccinated must return to the classrooms and the unions called for a strike 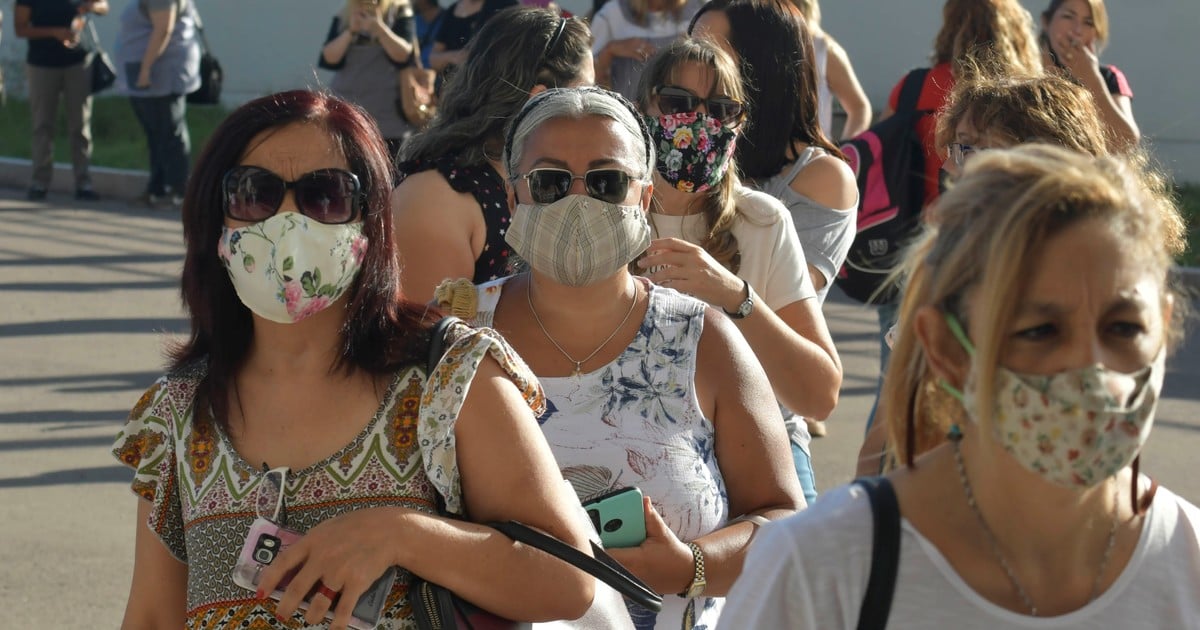 A new provision of the Government of Mendoza forces to back to the course to teachers who belong to risk groups, who have received at least one dose of the vaccine against the coronavirus. The main provincial union rejected the measure and called for a strike for this monday.

Resolution 1255 of the General Directorate of Schools of Mendoza it was published on Friday in the Official Gazette of the province. It details that the teachers who are in the defined risk groups due to the pandemic and who were exempted from working in person – dispensed is the term they use-, they must return to their workplaces.

The measure is for those education workers who have received at least one dose of the covid-19 vaccine, and even those who chose not to get vaccinated.

At the national level, a similar measure is still in force. The DNU 241/2021, did not repeal or suspend the Joint Resolution of Health and Work 4/2021 published in the Official Gazette a week before, which authorizes this call to face-to-face work by employers.

The resolution of the Mendoza government, like the national one, details that those workers who received at least the first dose, must wait 14 days to return to classrooms.

25% of teachers have already been vaccinated in Mendoza, it corresponds to the group of teachers that reaches the third grade and interacts with children up to 8 years old. Photo: Orlando Pelichotti / Los Andes

Both the national norm and that of Mendoza, exclude from the obligation to present themselves workers who present immunodeficiencies: congenital, functional or anatomic asplenia (including sickle cell anemia) and severe malnutrition; HIV depending on the status (less than 350 CD4 or with detectable viral load); people with immunosuppressive medication or high-dose corticosteroids; and oncology and transplant patients ”.

In the case of Mendoza, it orders that those who do not return to their face-to-face tasks will be considered “Absent without the right to collect their salaries”.

The measure provoked the ire of the teaching unions, which have been demanding that all classes return to virtual mode, among other claims. For this reason, the SUTE – the main state teaching union – convened a strike and mobilization for this Monday.

In Greater Mendoza the occupation of intensive therapy beds is of 87% and infections in an average of 900 daily cases, with a positivity of 26% in the tests.

The teaching union denounced that more than 800 education workers and around 300 students were infected since they were forced to return to face-to-face, in a system of two bubbles per classroom.

The last case that caused commotion in the educational field was the death of teacher Walther Din this week. The educational system in Mendoza, from the initial novice to the university, covers 500 thousand people.

The measure of force

From Sute they called a strike and “caravanzo” to the Government House for this Monday, April 19. “We demand responses and we hold the government responsible for the loss of these lives, the contagions that have occurred and the future damages to education workers, students and the educational community,” says the statement from the Mendoza teachers union.

The union specified their claims in: the suspension of face-to-face classes until the contagion curve drops; access to connectivity and technological devices for workers and students, a vaccination plan for all; and more budget for health, attention to social needs and for education.

Presentism in Mendoza schools is 95%, according to data from the school government. Photo: Orlando Pelichotti / Los Andes

In the middle of the educational discussion, the General Directorate of Schools reported that the province has a 95% school attendance.

Due to the bubble system, it is estimated that 60% of primary and secondary enrollment goes each week. Only 10% corresponds to private school students who go every day; in the case of state schools and a good part of the private ones with subsidies, they attend every other week or every 15 days. Those who have fewer face-to-face classes are students from the National University of Cuyo schools and public and private university students.

25% of teachers have already been vaccinated in Mendoza, it corresponds to the group of teachers that reaches the third grade and interacts with children up to 8 years old. The director of Schools, José Thomas, told Nihuil radio that they have only had to temporarily close 15 of the 2,915 schools that operate with face-to-face classes throughout the province.

Director of BECK, Naruto Shippuden and other anime dies | EarthGamer