Mendoza differs from the DNU: it allows meetings and extends the circulation hours 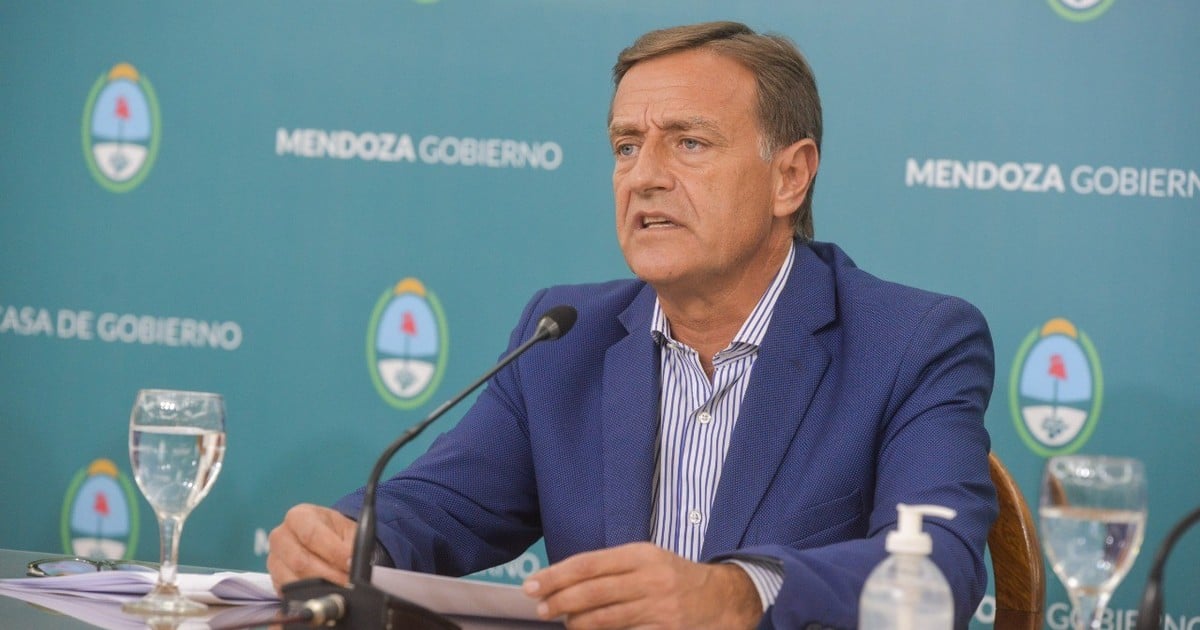 Mendoza distanced himself from the decree of necessity and urgency published by the national government with restrictions against the second wave of the coronavirus.

Governor Rodolfo Suárez announced that he will not follow the provisions of Alberto Fernández: he will allow the family meetings and, in addition, it will have your own circulation schedule.

The provincial president ordered that family reunions will continue to be enabled, with up to 20 people outdoors or 10 indoors.

Referring to the limits for circulation, he clarified that they will be in force between 0.30 and 5.30 in the morning, as it already happened. The national government had ordered the prohibition between 0 and 6.

Suárez justified this time slot by the provincial “idiosyncrasy”, the availability of more hours of light and the orders from local sectors.

“We stipulated that the health alert should be from 00.30 hours and this makes a lot of sense and we are going to maintain it. We want the restaurants and all the workforce they generate to continue to be maintained,” he added.

Rodolfo Suárez, governor of Mendoza, does not abide by all the restrictions established by the national government.

Although he had room to adapt the measures to local situations, he assured that the new restrictions will govern in the 18 Mendoza departments.

Thus, it included Rivadavia, San Martín, Maipú, Godoy Cruz, Capital and Luján de Cuyo, the departments classified as epidemiological “high risk” according to the indicators prepared by the national government.

“We cannot have a provision that changes from Guaymallén to Capital or Godoy Cruz. no kind of sense. Therefore, the provisions will be for the entire provincial level, “explained Suárez.

The president also announced that the practice of sports will be allowed, without an audience. And recreational events may not have more than 250 people.

What’s more, “the casinos will continue to operate, with the time restrictions established as before “.

The bars and restaurants will continue to work at 50% of the capacity.

According to the epidemiological part of the national Ministry of Health, Mendoza registered 1,046 new cases of Covid in the last 24 hours. Since the beginning of the pandemic, it has 77,790 infections.

In addition, this Thursday three deaths were reported.

The occupation of the intensive therapy beds it is 70 percent at the provincial level.

With these announcements, Mendoza maintains the guidelines of the provincial decree published on Tuesday. And it highlights the differences with the Casa Rosada. Rodolfo Suárez was one of the governors who disagreed with the new restrictions, in full negotiation between the provinces and the Nation.

Córdoba is the other province that distanced itself from the DNU signed by the President.

The governor of Córdoba, Juan Schiaretti, has already set a distance with the restrictions. Photo Capture

Governor Juan Schiaretti anticipated on Wednesday, before Alberto Fernández’s televised message: “We are going to continue with the work system with which we have been working until today.”

Although it eventually incorporated much of the restrictions, it extended the hours of operation of bars and restaurants until 1 a.m. on weekends.

In addition, it will allow meetings of up to 10 people in private homes.

The other jurisdiction that showed its disagreement with some points of the DNU was the City of Buenos Aires.

“We do not agree with restricting circulation, but we are going to abide by it,” said Horacio Rodríguez Larreta, this Thursday morning.

Video: the huge snake that peeked out of a bathroom drain

Out of the corona Minister Kiuru in Yle’s A-Talk: Astra Zenaca’s connection to blood clots affects the lifting of Finland’s corona restrictions