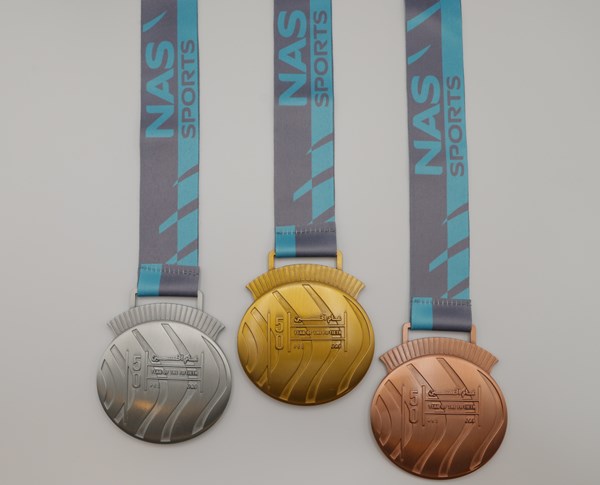 The Dubai Sports Council unveiled the medals of the eighth edition of the “Nad Al Sheba Sports Tournament”, which is held annually in the blessed month of Ramadan at the Nad Al Sheba Sports Complex, and its competition continues until April 29th, when the medals are adorned with the 50th year logo carved in the shape of the Nad Al Sheba Sports Complex building These medals will be awarded to the participants in the tournament tournaments, and this initiative comes in celebration of the 50th anniversary of the founding of the UAE, coinciding with the launch of the “year of 50”, and within the framework of the Dubai Sports Council’s continuous keenness to issue different medals for each sporting event, which constitutes an aesthetic symbol that tells the story of Venue and event are documented for sporting achievement.

The Dubai Sports Council used to issue medals bearing commemorative pictures of the most prominent cultural, tourist and urban events and landmarks in Dubai, as part of the development of tourism awareness among athletes as well as sports awareness, so that these medals would be a distinctive symbol and become a permanent memory in the minds of participants in sporting events.

For his part, Sheikh Saeed bin Maktoum bin Juma Al Maktoum, President of the Badel Tennis Federation, confirmed that the tournament played an important role in the spread of the game and its development locally, and increasing the number of its practitioners from people of the country and from different nationalities, thanks to the annual tournaments that are held during the tournament, and he said: The game would have reached this level and achieved wide spread in the country, had it not been for the support and patronage of His Highness Sheikh Hamdan bin Mohammed bin Rashid Al Maktoum, Crown Prince of Dubai and Chairman of the Executive Council, as His Highness gave the game unlimited support, which enabled it to start, grow and develop, as directed By constructing the most modern stadiums for practicing Baddel Tennis and providing specialized cadres to spread and develop it, and set an example for young people about the importance of this sport, when His Highness practiced and praised it, and urged young people to practice it.

On the other hand, the first round competitions for the gold category of the tournament resulted in Marc Serera and Victor Arwes defeating the duo Hamad Al Ali and Khaled Al Shamsi in two unanswered groups, 6-3 and 7-5, and qualifying for the next round. Four matches will be played tonight in the quarter-finals, including two matches for the men’s gold category, where the first pair gathered Emilio Mesas and Mason Xver against Dean MacFarlane and Matthew Macfarlane, and in the second match Salem Ali Al-Houli and Muhammad Asif will meet with Martin Nochez and Guillermo Villavani, while two matches will be held. For the quarter-finals of the women’s bronze category, the first duo gathered Philippa Firmino and Maria Rodriguez in front of Josepa Beck and Salma Babik, and in the second match the duo consisting of Diana Samer and Fatima Mohamed Abdullah will meet with Jessica Palma and Lolly Guerrero.

The Spanish player, Victor Arroes, confirmed his happiness with the development the game is witnessing in the Emirates, explaining that he started playing this game since moving to Dubai, after he was a tennis player in the past, praising the wonderful organization of the tournament and the high levels shown by the various participants.

Head of Tatarstan vaccinated against COVID-19

They denied the release of businessman Fred Machado, accused by the US of drug trafficking