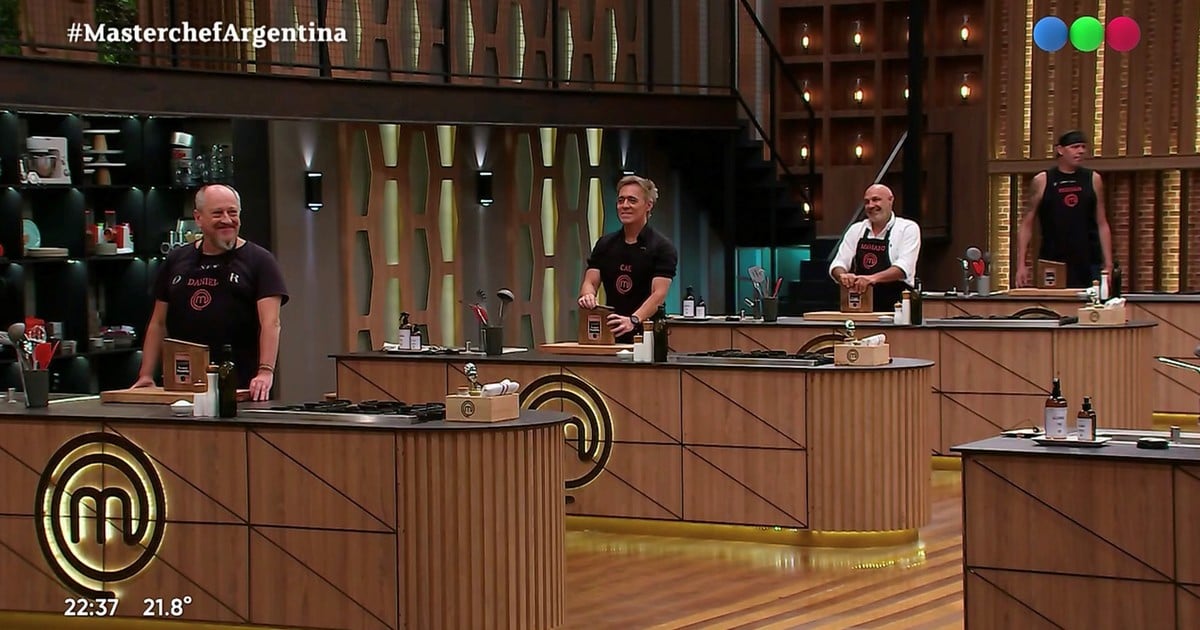 On MasterChef Celebrity (Telefe, from Monday to Thursday, at 10:30 p.m.; Sunday, at 10 p.m.), the reality show hosted by Santiago Del Moro, yesterday, Monday, began the week of “Rematch”. Flavia Palmiero showed off and managed to go up to the balcony.

Participants who were left out of the game now compete to try to re-enter the cycle. They are: CAE, Juanse, Mariano “El Loco” Dalla Libera, Sol Pérez, Fernando Carlos, Daniel Aráoz and Hernán “El Loco” Montenegro, who had been eliminated at the gala the day before.

From yesterday until Thursday, those who make the best dish every day will go up to the balcony wearing a gray apron. Y on Sunday, in a definition gala, it will be known who of the famous eight who play the rematch enters the program again.

Eight eliminated from MasterChef Celebrity are now competing to get back on the cycle. Capture TV.

Marcelo Polino, MasterChef ambassador, was visiting the studio. Each participant received a guillotine and a photo of the dish that, at the time, left it out of the competition.

These elements were a symbol, because the challenge presented by the jury made up of Donato De Santis, Damián Betular and Germán Martitegui consisted of repeating the dish that each one had brought about with the elimination.

As expected, upon learning of the slogan, the participants experienced it as a true nightmare. No one wanted to hear even about the recipe that had cost them their stay in the contest.

But the rules of the game are to be complied with, in such a way that everyone set to work to replicate, with better quality than before, the dishes that at the time led to their elimination.

After the time that celebrities had to cook, Santiago del Moro repeated the famous phrase: “Cooks, hands up” and then, he went to the tasting and criticism stage from the jury.

When deciding which participant would go up to the balcony with a gray apron in order to fight for the return to reality at Sunday’s gala, De Santis, Betular and Martitegui chose Flavia Palmiero.

Flavia had to repeat a recipe that is the original creation of Germán Martitegui: frog legs, with parsley puree, potato foam and crunchy raw ham. For this reason, the return of said chef was the most feared.

In truth, Flavia had nothing to fear: the jury member was fascinated by her plate. “When I say that they learn from their mistakes, it is exactly this,” said Martitegui.

Then he told Palmiero: “The yolk is perfect. The potato and garlic foam is wonderful. The ham crisp came out very well. The proportions are also very good. Clearly, it is a great advance.”

Thus, Flavia Palmiero ended Monday night in MasterChef Celebrity on the balcony and waiting to measure forces again at Sunday’s gala so that his gray apron turns into a white one and thus returns to compete in the Telefe kitchen reality show.

Flavia Palmiero is the first to get on the balcony in the MasterChef Celebrity rematch week. Capture TV.

Rally driving Jari-Matti Latvala got a flying start as Toyota’s rally boss – the balance of the last race was a run-out, a crash, a victory and a ride to the police station