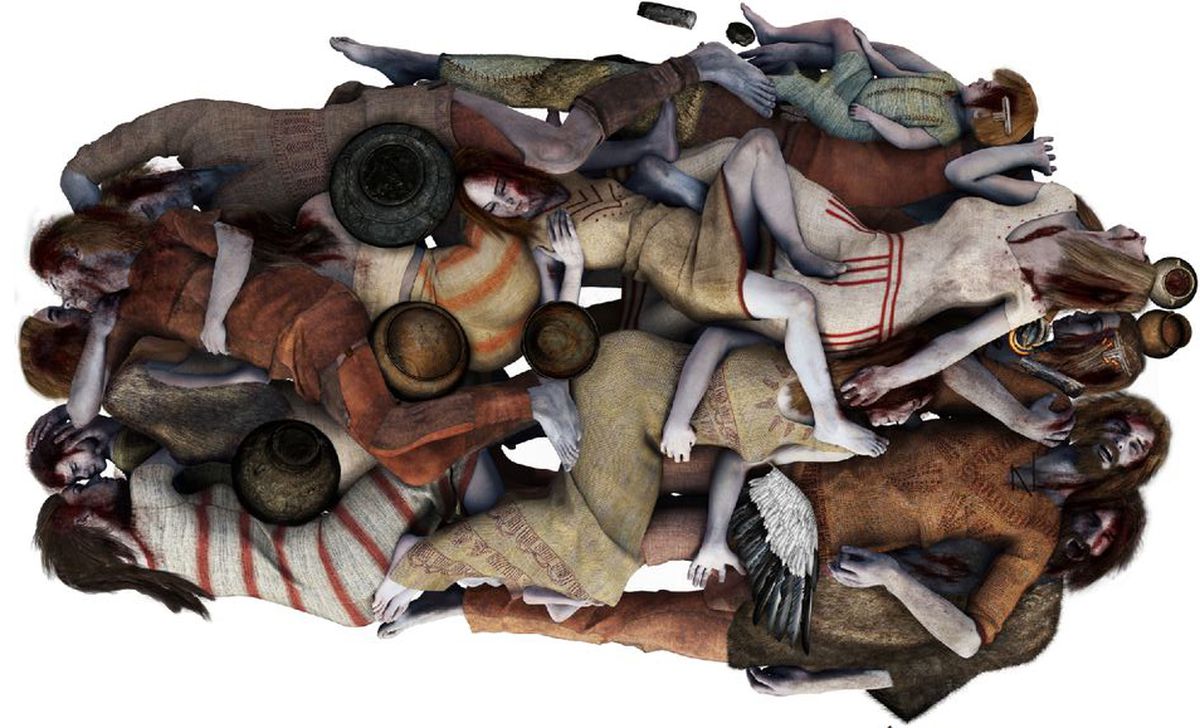 Traces of violence can survive the passage of centuries, even millennia. For this reason, archeology has closed the old debate between Thomas Hobbes (“Man is a wolf to man”) and Jean-Jacques Rousseau (“The good savage”) in favor of the English philosopher: all the evidence indicates that the brutality is as old as humanity. However, in recent times, new excavations and DNA investigations may provide a more accurate portrait of the moment when organized violence began and humanity’s most disgraceful institution was created: war.

The massacres are lost in the remoteness of the Paleolithic, but the brutality accepted socially and articulated in a conflict is much more recent. “The basic question is what we understand by war,” says the French researcher Anne Lehoërff, professor at the Cergy University in Paris, expert in European protohistory and author of the essay Par les armes, le jour où l’homme invents the war (Paris, Belin 2018). “War and violence are not the same. Violence is based on the nature of the action itself, the fact of hurting someone, wanting to hurt or kill them. War is a more complex organization of violence, carried out by society that integrates it into its modes of operation. In the known archaeological evidence, there is undoubtedly evidence of early violence, even in the Paleolithic and especially in the Neolithic. However, the notion of war as a component of society is only clearly established in the following period, the Bronze Age for Europe ”, which began some five or four millennia ago.

An element, relatively new in the immensity of prehistory, indicates without a doubt that warriors and conflicts already existed: the sword, which appeared in Europe about 3,700 years ago. “The sword marks a turning point,” says Lehoërff. “It can only be made of metal, it has important consequences in the way of fighting, since it brings the attackers closer. It is a novelty, a weapon that can only serve this purpose. The sword represents a rupture that allows us to sense that it is a key milestone in the birth of war in the full sense ”.

However, the boundaries between one phenomenon and another are not always clear, especially because the oldest signs of violence go back to the confines of our species. As explained by the paleoanthropologist José María Bermúdez de Castro, co-director of Atapuerca who has just published the essay Gods and beggars (Criticism): “At the TD6 level of the La Gran Dolina deposit we found evidence of cannibalism. There is no doubt that cannibalism involves violence between members of the same species. As far as we know, this is the oldest known act of cannibalism in the history of human evolution, about 850,000 years ago. “

But acts of violence are one thing, which in this case can have nutritional or ritual purposes no matter how unpleasant they may seem to a contemporary palate (calories were not something that was wasted in prehistory), and massacres another: murder. en masse of one group of individuals by another group. Until recently it was thought that this type of act did not appear until the Neolithic, the revolution through which humanity invented agriculture and livestock farming and, therefore, organized societies more than 10,000 years ago. However, as has happened so many times when studying prehistory, two sites thwarted previous theories.

The remains of the Jebel Sahaba massacres, the so-called Cemetery 117, in present-day Sudan, and Nataruk, in Kenya, reveal mass killings 13,000 and 10,000 years ago respectively. The victims lived in hunter-gatherer societies. They are, so far, the oldest remains of organized violence discovered, analyzed just five years ago. But it is not about battles either, since the dead are men, women and children. Since then, many millennial massacre scenarios have been investigated, already in agricultural societies. The most famous victim of prehistoric violence is Ötzi, the Iceman, the mummy discovered in the Alps who was shot to death 5,000 years ago. Neolithic cave drawings in the Cueva del Civil, in Castellón, show what looks like a combat between archers.

The last deposit analyzed, the results of which were published in March, is in Potočani, present-day Croatia, and houses 41 corpses massacred 6,200 years ago. DNA showed that most of them were not related to each other, although their genetic ancestry was common. Other recent genetic research, in Koszyce, southern Poland, revealed two details about a 5,000-year-old massacre, during which 15 people were killed. Who buried them did it with great care, since the brothers, as well as the mothers and their children, were buried together. In addition, the DNA determined that they belonged to a different human group than their neighbors. Could it be a confrontation with invading peoples and that they were buried by the survivors of the attack?

These results represent only the beginning of the revolution that paleogenetics can bring to the study of violence, which until now has been used in a very limited way. “Genetics allows investigating what could be the reasons for a massacre,” explains Iñigo Olalde, a Spanish researcher who worked three years at Harvard with David Reich’s team, the most avant-garde in the world in this field, and who is part of the Barcelona Institute of Evolutionary Biology with a grant from la Caixa. Olalde, who is one of the signatories of the Potočani study, continues: “In the research in which I participated, the vast majority were not closely related: a group came to a village and indiscriminately killed those they encountered. It was not violence directed at a family group. In addition to the study of trauma, material culture, anthropology, DNA allows more data to be obtained. Although these are very recent techniques and very few deposits have been studied ”.

The massacres, which are not the same as a war, reveal confrontations for the territory, for resources, the result of demographic pressure, for women, for family quarrels, for the appearance of new human groups in large migrations; but there are still no indications that point to the presence of a Neolithic caste of warriors. Palaeogenetics can help more precisely draw that elusive frontier of human brutality.

“It is clear that violence was part of Neolithic life and that sometimes entire villages were attacked and their inhabitants killed,” he says. Christian meyer director of OsteoARC, the research center of osteoarchaeology from Germany, who has worked in different sites with remnants of violence. “Humans are humans wherever or whenever they have lived. But we must also not forget that the opposite of these ‘negative’ behaviors also occurred. Many more cases of ‘positive’ behaviors are known, people who work together, build together, live together, bury their dead, trade in peace with other people. The building of alliances and social networks are the true foundations of societies, while violence, war and death are an unfortunate side effect ”.

Journalist Tatiana Nikonova dies at the age of 43