Marvik: I am not satisfied with the performance and do not compromise with Indonesia 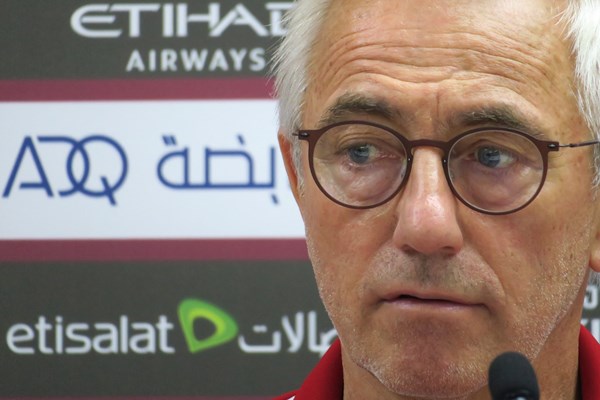 Dutch coach Van Marwijk confirmed that the team had the best to offer, noting that the team lacked focus in periods of the match, and said: “I am not satisfied with the performance during the match, yes we scored, but we lacked focus, and we lost more than 5 or 6 goals should have been scored and translated into the opponent’s net, to control the course of the game.”

He continued, “The match was not easy, and the opponent studied well. We watched against Malaysia and watched in previous matches, and it seems that he prepared well for the match, and closed the way for us to complete control; Therefore, we made some adjustments during the second half, to remedy the situation, after a goal was conceded, and we were able to consolidate the victory in the last minutes.” With regard to the players’ performance and the reason for the difficulty in the match, he said, “I think that this match is building enough experience for the players. They have learned an important lesson, which is that the result of two goals for one is never enough, but the focus must be on strengthening and always playing to ensure a difference of at least two goals from the opponent.” .

With regard to facing Indonesia and whether it will comfort the players, the fact that the match is not essential and decisive; Since the qualifiers system imposes the exclusion of the result of the last team, he said, “We will not compromise against Indonesia, we will play with full concentration, and it cannot be said that we have qualified for qualification. This will not be recognized until the end of the qualifiers and after winning the last two matches in the group; Because that is the goal of all of us.”