Márquez, sixth in Portugal after following Mir’s wheel: “I have looked for life” 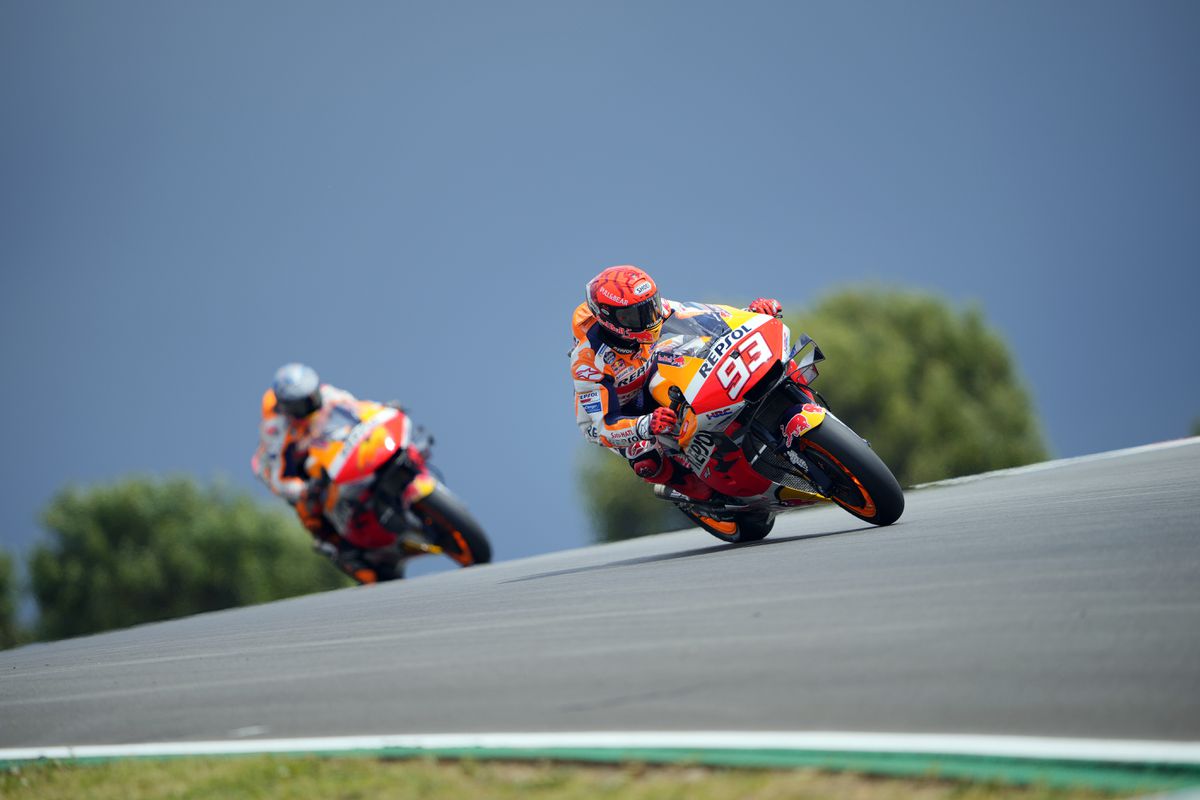 There are news and new rules in the Motorcycle World Championship. However, the protagonists are the same again at the Portuguese GP after the return of Marc Márquez to the tracks. The Catalan said a day before that he did not quite understand where the limits of the Honda were, nor how to improve it and make it to his liking, since he lacked hours and laps with the motorcycle. He has not forgotten to pilot, however. As much as he accused the fatigue in his right arm, the one whose injury has had him without competing since July. On his return to MotoGP, Márquez will start (this Sunday, at 2:00 p.m., on DAZN and Movistar MotoGP) from sixth on the grid after a somewhat controversial qualifying session.

The controversy is explained by the fact that there are light panels scattered around the circuit that inform about whether there is a yellow flag or a red flag with much more efficiency than only the commissioners waving a flag from the road. There are also sensors that define the limits of the track in those areas where it is considered that going off the pianos helps to improve the times. So more penalties have been stipulated. For example, a rider who improves his own times when passing through a section affected by a yellow flag – it is required to reduce speed after an accident has occurred on a certain section of the circuit – will have that lap canceled. And that was exactly what happened to Pecco Bagnaia (Ducati) this Saturday during the last minutes of qualifying. With the bad luck that the Italian had just signed a heart attack lap at the Algarve circuit. Far from celebrating the pole, Bagnaia fell from first to 11th on the starting grid. Viñales will start from the 12th position, discarding his times, which also brought him closer to the pole, for going half a millimeter out of the allowed margin. “I have the rhythm, but now the race will be very different,” he complained.

Once the irregularity was revised, in place of Bagnaia, Fabio Quartararo (Yamaha) appeared in the first position of the times table. The Frenchman, the winner of the last race in Doha, had also ridden quite fast, setting a new record on the Portuguese track: 1m, 38’862s.

In the first row of the grid he will be accompanied by Alex Rins (Suzuki), second, and Johann Zarco (Ducati Pramac), third and current overall leader thanks to their two second places in the first two races of the course in Qatar.

Very close to them, just a few meters behind, will be Marc Márquez, sixth in a long-suffering qualifying session. The second row is an award for the Repsol Honda rider, ranked behind Jack Miller (Ducati) and Franco Morbidelli (Petronas Yamaha), who was forced to reduce efforts at the end of the day and went into the qualifying session when there were less than four minutes to go. He had time to take a single quick lap. And he nailed it: 1m, 39′121s, less than three tenths of Quartararo. The day ended, however, with another controversy that pits him against the 2020 champion, Joan Mir.

Márquez, who was seen making multiple gestures to loosen the muscles of his right arm, whose humerus accumulated three operations between July and December of last year, had to go through Q1 first. But he solved it with solvency. And thanks to Mir’s wheel, whom he sought insistently to help him squeeze out the last tenths. That upset the Mallorcan: “We already know that Marc likes to play this game. It didn’t make me nervous, but it did bother me, I lost a lap and then he took advantage of my wheel. That’s why they penalize in Moto3, but in MotoGP, no ”, he complained. “When you arrive after nine months, you look for tenths of a second anywhere. In the end, I had to look for life. This is motorcycling. They have done it to me many times. I shot alone all Saturday, but in the end I needed some help. And I have chosen the best, the champion ”, answered Márquez.

When he left for Q2 he followed the same strategy and waited to find the reference of another Suzuki, Alex Rins, to return to the track after a hard day. “Marc is very good at doing these kinds of strategies and mind games. I am learning … The good thing is that at all times there has been respect ”, said the Barcelona man, who does not consider the game that he lived with Márquez punishable in the final session on a busy Saturday for the newcomer.

The Catalan rider did 47 laps of the Portuguese circuit, this is about 215 kilometers. And the overload was felt in his right arm: in the forearm, gripped by the effort, in the elbow, the shoulder … The end result, however, was fantastic. Starting from the second row and trying not to lose track of the guys who have fought to win the first two races is a magnificent setting to return to racing after nine months out. “I don’t know if I will be able to endure the 25 laps of the race. I know I will suffer ”, he confessed, however.

Martín, in the hospital with two fractures and a head injury

According to his letter of introduction, the Algarve circuit, technical, very fast and very physical, was the scene of some very ugly falls at high speed. One of the worst unemployed was Jorge Martín, who was evacuated by helicopter to the nearest hospital, in the town of Faro, with a head injury and severe blows to both the right wrist and the right ankle. Although, according to those who assisted him on the same track, the Ducati Pramac team rider did not lose consciousness at any time, he was somewhat dazed after the accident. That is why he was transferred to the hospital for a complete check-up and will be admitted for 24 hours for observation. In addition to the head trauma, two fractures – both will require surgery – were observed in the metacarpal of the first finger of the right hand and in the malleolus of the right ankle.
Martín, who had an excellent weekend at the last grand prix, in Doha, where he finished third, fell at high speed in the last minutes of the third free practice, held this Saturday morning. He lay prostrate on the ground, face down, shrunken from the pain and the impact. It will not run this Sunday.
It is not known whether Honda LCR rider Takaaka Nakagami, who also suffered a tremendous crash on Friday, will be able to participate in the race. He suffered abrasions on his body and a strong impact on his chest that made it difficult for him to get on the bike in good conditions this Saturday. Despite trying in the morning, the Japanese, who reported a lot of pain, chose not to go to the free room or to the qualifying session. He will decide this Sunday, in line with the advice of the MotoGP medical team, led by Ángel Charte, if he will contest the grand prix.

With a feminist foreign policy, Biden could properly address the issue of climate change

Workshops for the disabled: work for everyone – but where?