María Eugenia Vidal: ‘It’s not just another election, it’s the worst moment in the country since 2001’ 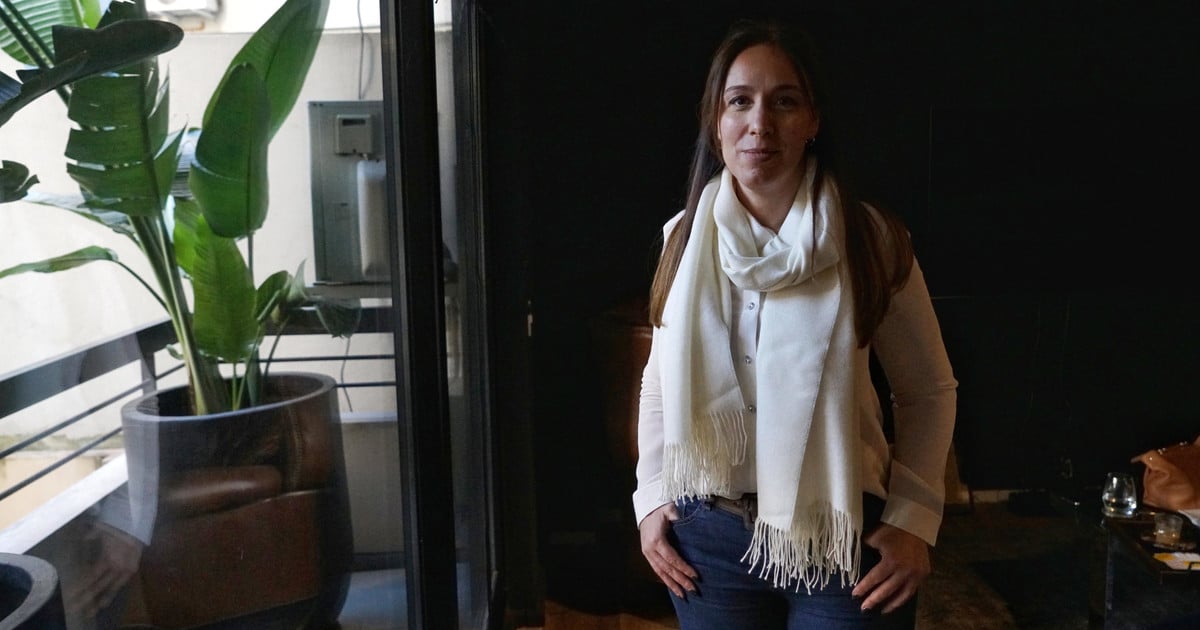 ─After many years in executive functions, if she is a deputy, she will go to work for the first time in Congress. How do you imagine the change?

─Let’s go step by step. My commitment and my work is that the porteños choose us to put a limit to power and to begin to mark another path for Argentina. Then I’m going to do everything I can so that Together for Change to rule again in 2023. It is not just another election, the future of the Argentines is at stake. I do not remember a more difficult time in the country since 2001. It is a question of putting a limit to power and that the ruling party does not have an automatic majority. I think we have to do something to change this and regain our idea of ​​the future. People feel hopeless. There is a lot of fight to give in what comes after ’23. We are a political force that governed, made mistakes and successes and learned.

─Are you convinced by the electoral assembly of Together for Change?

─I am very satisfied with the fact that Together for Change supports unity. It is the first opposition to do so since Peronism came to power after the return of democracy. Today that is not under discussion in any of the 24 provinces. In all spaces we go together, in some cases in unit lists and in others in a STEP, but always defending the unit, in the same space and with the same values. It seems important to me that in a situation like today’s in Argentina there is a united and solid opposition, that acts as a limit in front of the power and that it balances.

─Is there renewal within the opposition?

─Yes, I notice it in the province of Buenos Aires, where it gives me I am very proud to see potential candidates appear, although the electoral offer has not yet been defined. For example, Facundo Manes, for radicalism, but also new figures such as Carolina Losada in Santa Fe or Carlos Eguía in Neuquén. And there are others too, it is full of valuable leaders.

Faced with his territorial change in politics, Vidal defines himself as “proudly from Buenos Aires, Buenos Aires and Argentina.” Photo: Emmanuel Fernández.

─Would Martín Tetaz be that new face in the city on the list that he will head?

─I can’t say if he is going to join or not, but I would love for him to do so. When he decides, he will communicate it, he will always have a place in our space, because we want new and young people to join politics.

─Was this the first time that your decision prevailed over that of the space you are part of?

─Always, in these cases, they are joint decisions. I am very aware that space is more important than oneself. I never speculated and all the decisions I made in my career were because I was convinced. It happened to me when I started doing politics and I felt that the PRO was the new force where I wanted to participate; Also when Mauricio Macri offered me to be vice-chief and nobody knew me, but I felt that I had to accompany him in a second term. It happened to me again in 2013, when I went every day to tour the province of Buenos Aires and no one believed that I could be governor. I did it there, and also in 2017 and 2019. Today I feel that this, the City, is the place where I have to be, because I believe that there are others who have to grow in the province as I grew up before. There are many deputies at risk, many seats to renew, it is a required choice for the City.

─ He communicated to Macri his decision to compete for the City 15 days ago. How was the back room of that meeting?

─Sometimes they imagine back rooms that are not … We have a relationship with Mauricio for more than 15 years. Our talks are honest, deep and have a lot of staff that we do not disclose. In many years we had agreements and also differences. That was never on top of our relationship. I asked his opinion, as I also listened to other referents of the space. But at the end of the day the decision was mine.

Pre-candidate for deputy for the City, she assures that she will work so that Together for Change is the government in 2023. Photo: Emmanuel Fernández.

─It was quite a sign then when a few months ago he removed the slogan “proudly from Buenos Aires” from his Twitter biography.

─I am amazed at how important my Twitter profile has become (laughs). I feel proudly from Buenos Aires, Buenos Aires and Argentina. It was always like this. My story is that of many porteños who lived on both sides of General Paz, because an avenue is not a division and it was demonstrated in this year and a half of pandemic. I am someone who lived half her life in the City, where I began my political career and was honored as a deputy chief, deputy, and minister. And that I was also chosen by Buenos Aires to be governor. It is not the only case in politics because this story of having lived on one side and the other happens to many of us.

─Can’t it be confusing for the electorate that whoever governed the Province is a candidate in the City and that a Buenos Aires leader like Diego Santilli could be a Buenos Aires option for Together for Change?

─On both sides of General Paz we are Argentines defending other Argentines. Inflation affects Buenos Aires and Buenos Aires, the lack of work, too. There are many themes in common, which we will continue to defend without distinction.

─What did you think of Patricia Bullrich’s decision to lower her candidacy in this election?

─The gestures of greatness in politics are not frequent. And she had it. I value your decision and have prioritized the unit. He knows that I will always value him. The same with Lilita (Carrió), which is not the first resignation she makes because she has always worked for unity. And Together for Change proved that unity is here to stay. He did it in 2019, he will do it again in 2021 and he will do it again in 2023, when all Argentines can be offered another path, better than the one they are traveling.

─Can it continue to expand Together for Change? Will there be an intern with Ricardo López Murphy?

─It is very important that the project remains open to expand and no one has to authorize another to enter. Ricardo is a person with whom we share the same values, although we may not think the same about everything. That enriches the space. In the end, on September 12 we are going to be on the same ballot for sure.

─Is there a place for radicalism to compete in the Province? How is your deal with the party?

─In the case of the Buenos Aires UCR I had a great experience, a very good relationship with the mayors and with the leaders of the party since the Province began to walk. I think it’s very good that radicalism wants propose their own candidate to society. I am one of those who believes that we must work for the unit on the list first, but if not there will be a STEP in which the people of Buenos Aires will decide.

─How do you see the role of Horacio Rodríguez Larreta within Together for Change and his work as head of the Buenos Aires government?

─What most must be appreciated about Horacio is his role in the pandemic in the face of so much uncertainty, lack of a national government plan, twists and turns and arbitrariness. In front of that, Horacio, Fernán Quirós, Diego Santilli and Soledad Acuña They showed us a path of transparency in information, professionalism and rigor to deal with the pandemic. Promising what is fulfilled, defending presence in education; They showed us something else and all of us from Buenos Aires are grateful for that. Because in the midst of the Nation’s improvisation, the city government became an anchor, a place where you say “things are being done well here.”

─As well as the Province in its management demanded for the recovery of the Suburban Fund, today the City faces a conflict with the Nation for the withdrawal of co-participation. What is your opinion about this?

─The experience of the recovery of the Conurbano Fund is exactly opposite and contrary to the claim of the City for the co-participation funds. The Province and the City are the two jurisdictions that contribute more than they receive and are at odds with the rest of the provinces. In 2016, with the support of all political spaces, we went to the Court to claim, and Mauricio Macri as president returned the Suburban Fund to Buenos Aires directly from national funds; It was not taken from any province, it was not at the expense of anyone. That allows Governor Kicillof today to have more resources to manage. In the case of the City, the opposite happened: the national government, to solve problems in another province, arbitrarily took its own resources from it. He appealed to a policy of division and resolved in the opposite direction to what happened in the Suburban Fund.

─ What will the campaign be like? In person or via Zoom due to the pandemic?

─I have always campaigned in the same way. Walking the street. This time it will be with a chinstrap and social distance, respecting all protocols. I want to be there, even if it’s to bump our fists and we can’t hug. Of course we are going to take advantage of mechanisms like those that technology offers us, but I believe in hand in hand, in looking into the eyes.

─How do you see the struggle for power spaces within the Government?

─I see them more fighting among themselves than solving people’s problems. The President having to go out to respond to Máximo, on an issue as relevant as vaccines while we are going through a pandemic. It is not a debate in a party meeting. They make decisions about the lives of millions of Argentines every day. Today the priority should be to solve the problem of work, inflation, the second dose for those who still wait. Give concrete answers. Not coming and going, improvising, being far away, not understanding what is happening to us.

─Two weeks after the closing of the lists, an adverse ruling for the Macri family comes out by Correo Argentino and the former president is accused of promoting a coup in Bolivia. Is it casual?

─I think they are two campaign actions by the ruling party. For them the electoral campaign began and their objective is Macri. They did not know what else to accuse him of and accuse him of setting up a coup. It seems silly to me. I know him and I attest to Mauricio’s honesty, but I do not attest to the honesty of (Carlos) Zannini.