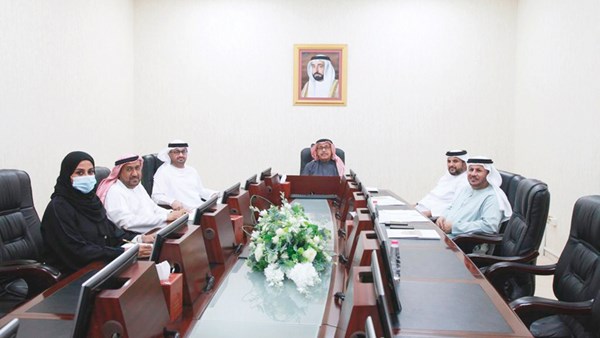 The Islamic Affairs, Endowments, Municipalities, Security Affairs and Public Utilities Committee of the Consultative Council of the Emirate of Sharjah, during its meeting held at the council’s headquarters in the city of Sharjah yesterday morning, reviewed its work for the year 2022 AD and what it intends to do according to its plan during the third regular session of the tenth legislative term.
The committee was briefed on its work mechanisms and proposals and took the appropriate decisions, in addition to following up on various issues of interest to society and affecting issues of interest to citizens.
The meeting was attended by Ali Mehd Al-Suwaidi, Chairman of the Council, and chaired by Obaid Awad Al-Tunaiji, Chairman of the Committee, in the presence of Obaid Muhammad Al-Qadeed Al-Tunaiji, the Committee’s Rapporteur, members, Ahmed Rashid Ali Al-Naqbi, Ali Seif Al-Nadas, and from the General Secretariat, Amna Basalib, the Sessions Affairs Officer and the Committee’s Secretary.
During its meeting, the committee discussed its agenda and the visits it intends to carry out during the coming period, especially during the first quarter of 2022 AD, and to see what the departments are doing to serve the community. .
The meeting discussed the start of preparation for the discussion of the policy of the Department of Housing in the Government of Sharjah during the month of January, in addition to conducting a number of visits, including the Department of Planning and Survey, next to the municipalities of the Emirate of Sharjah.

See also  Al Dhalei: Moving the headquarters of “Asian Rugby” to the UAE is a historic decision