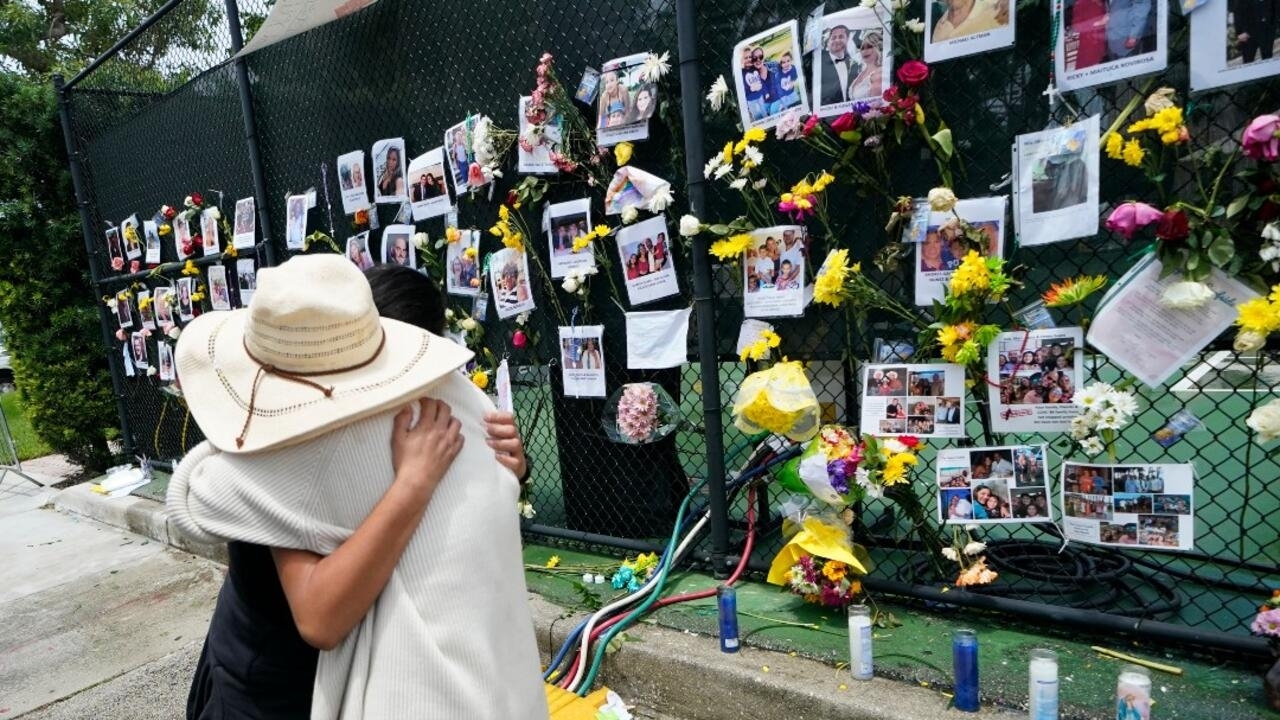 Dozens of the missing and several of the fatalities in the Champlain Towers building are Hispanic. On the fifth day of waiting, their families still have no answers about their condition and the causes of the collapse. France 24 spoke with one of the relatives of three of the Colombians who were staying in the building and who have not yet been found.

A few blocks from the Champlain Towers, the building that collapsed in the morning hours of Thursday, June 24, several of the relatives, acquaintances and friends of the disappeared gather to honor them. Many of them are Latinos who still do not know the whereabouts of their relatives.

Photos, toys, belongings and other types of objects of the victims hang on black bars that rest on the block.

Family members await more information. Rescuers continue to battle against time on the fifth day of searching through the rubble. The authorities call for patience and hope. Although it is increasingly difficult, as the death toll continues to rise.

For now, there are ten confirmed deceased, of which at least six are Hispanics who resided or were passing through the building. In addition, there are about 151 missing.

That is the case of Luis Felipe Barth, his wife Catalina Gómez and their daughter Valeria Barth who were staying for a few days in the place. The family of Colombian origin had traveled to the United States in order to be vaccinated and to spend a few weeks of vacation in Miami.

“Their last contact with the family was with Sergio, Luis Fernando’s brother, on Wednesday,” José Luis Arango, Catalina Gómez’s brother-in-law, told France 24. Since then, they have had no further information.

“Luis Fernando’s brother and Juliana, Catalina’s sister, had direct contact with the police and rescue entities, they took DNA tests,” he added.

The two Colombians are lawyers. Luis Felipe is the director of the Sustainable Territories area at the Science and Technology Center of the department of Antioquia, in western Colombia, and he was working online.

The news took the entire family by surprise. “It was very strong news because of the popular videos, as well as unexpected. Also because it is the entire Barth Gómez family that is missing. All the family members are very sad, ”says Arango.

Like that of the Barth family, there are many stories from Latin American relatives who have been waiting for days for news and answers about the causes that led to the tragedy.

According to information from the Foreign Ministries of the respective countries, six Paraguayans, nine Argentines, six Venezuelans, six Colombians and three Uruguayans were reported missing.

So far, the specific reasons why the 136-apartment building, which opened in 1981, suddenly collapsed while many of its residents slept have not been clarified.

What about the fatalities?

Ana Ortiz and Luis Bermúdez were Puerto Ricans. Ana was Luis’s mother who, according to the AP, had muscular dystrophy years ago and used a wheelchair. They lived on the seventh floor.

Through a Facebook post, Luis’s father wrote: “Now rest in peace and without obstacles in heaven … I’ll see you soon, my Luiyo.”

Likewise, AP released the data of the other deceased. Among them are businesswoman Stacie Dawn Fang, the 54-year-old first identified victim, Antonio and Gladys Lozano, a Cuban couple aged 83 and 79, respectively, and the Texan Manuel LaFont, 54.

#UPDATE 29: We have identified four additional victims that sadly and unexpectedly lost their lives in the tragic Surfside building collapse. Please keep their families and loved ones in your prayers. pic.twitter.com/MKKgXymIuM


During the identification day on Sunday, June 27, the identity of Leon Oliwkowicz, 80, and Christina Beatriz Elvira, 74, was clarified.

On the work of rescuers

The search for the disappeared is done through shifts of a hundred rescuers who work with techniques such as movement monitoring and listening for possible voices or debris beating.

Likewise, they are supported by rescue dogs from the Miami-Dade Fire Department and Task Force One from Florida.

Last Sunday, June 27, the families of the victims visited the place where the rescuers work, shouted their names and prayed for them. That same day, Miami-Dade Mayor Daniella Levine Cava visited the site and said she was heartbroken for “seeing our men and women searching through the rubble without stopping.”

Earlier today I visited the collapsed building with Director @FEMA_Deanne. It’s heartbreaking – but watching our men and women searching the rubble without stopping reaffirmed just how lucky we are to have the best in the world on this mission. pic.twitter.com/bwmhcbu8L9


As it is the fifth day, hopes of helping someone alive are dissipating. But Surfside Mayor Charles Burkett said it is still possible to find people alive, as earthquakes and other similar catastrophes have shown.

For her part, Maggie Castro, belonging to the Miami-Dade Fire Rescue, said in an interview with CNN in the morning that “we are still trying to find empty spaces.” He added that over time “it will be less likely that we will find survivors.”

Some time after the crash, a report by an engineering firm was released that showed that the building had a serious deterioration in the concrete of the underground parking lot, as well as in the pool deck. The document also recommended repairing the building in the “near future.”

Months later the Surfside inspector, Ross Prieto, had met with the inhabitants of the construction and as reflected in the minutes of the meeting, released by US radio NPR, he affirmed that the building “was safe.”

However, the opinions of the experts are divided. As Reuters puts it, Gregg Schlesinger, a lawyer and former general contractor who specializes in construction failure cases, concluded that the causes of the disaster were the same as those identified in the 2018 document.

While Donna DiMaggio Berger, a lawyer who works with the condominium association, assured that such problems were not alarming for the board, as they were “typical” of the buildings in the area. The opinion was shared by structural engineer Jason Borden, who told CNN that any signs of deterioration were typical of buildings in the coastal community.

There are still many unknowns and it is expected that the answers will be clarified with the investigations that continue to be carried out by the local authorities.