Many new faces: this is how Madrid and Barça are right now 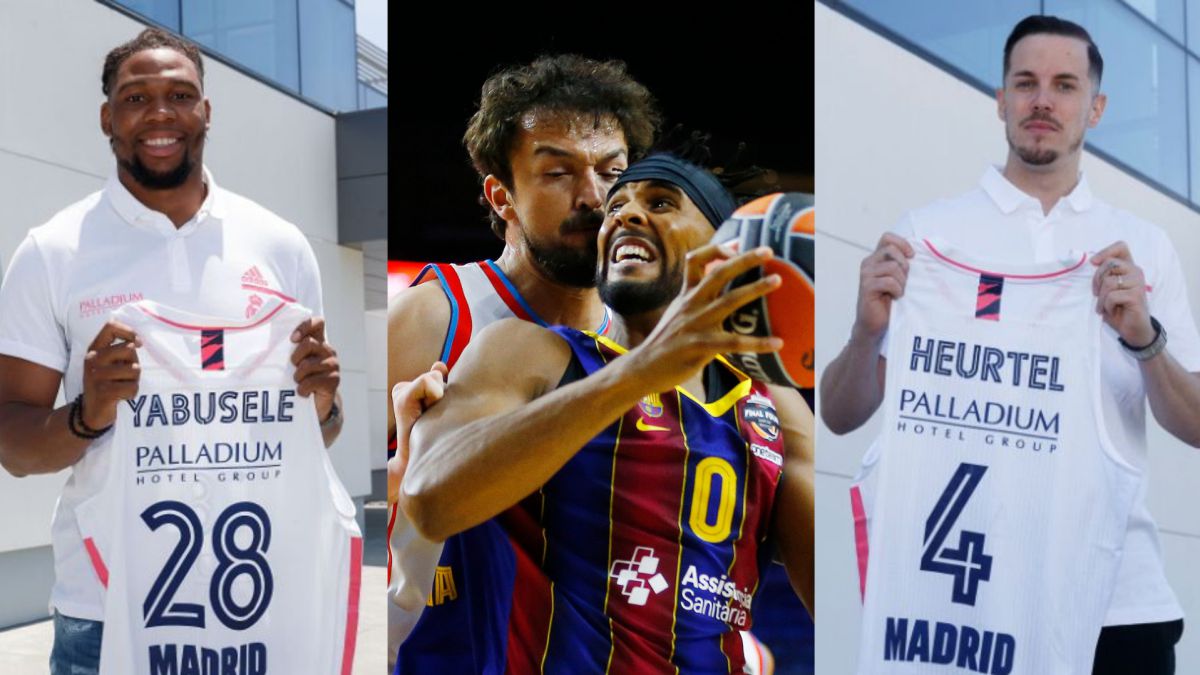 In the offices, the 2021-22 season has been underway for a long time. Without going any further, Real Madrid tied Thomas Heurtel in January, the same month in which he left Barcelona. His path, exchanging one of the giants of Spanish basketball for the other, may end up being a very busy journey this summer. A market to which both entities arrive after very different courses, but with the same objective: to reign in all competitions. Pablo Laso’s team, for the first time in the era of the Basque coach, has been left without any of the three great titles: neither the Cup nor the League nor the Euroleague. The Super Cup, won in September, is the only trophy that the entity has added to its museum this year. The twentieth for Laso. From that starting five, Facundo Campazzo, for whom no immediate replacement was sought, and Garbiel Deck would end up packing their bags for the NBA. Among the rest of the players, injuries and more injuries. Setbacks that, interspersed and piled up, held back the true potential of the team.

Rhythm inverse to that of Barça, who lost that first round in Tenerife, but were preparing for an exciting season. Finally, it has been: Cup, League and continental finalist. Only Anadolu Efes, where its only official reinforcement so far comes from, was able to stop the Sarunas Jasikevicius project. In March, in addition, a breath of illusion and, finally, also of performance entered the team. 20 years later, Pau Gasol returned to the team that gave birth to his legend. He did it when he was 40 years old and after not playing since March 2019, but nothing was an impediment. 16 games later in the national competition, he ended up averaging 10.4 points and 5 rebounds, a PIR of 15.6 that, when put into correspondence with the 15:47 minutes played, acquires meteoric overtones. There is no better proof of this than his presence at the Tokyo Olympics, where he will have the opportunity to give a closure? dreamed of its historical trajectory. And it is that there is one of the main doubts in the Barcelona planning, which, as anticipated in the first paragraph, advances to the beat of the white.

The Real Madrid squad is practically closed. With the arrivals of Nigel Williams-Goss and Heurtel himself, The white team has formed a trio of bases, together with Carlos Alocén, who hopes to make forget the horrors of last season in the demarcation. Nicolás Laprovittola, who is targeting Barça himself, has left the engine room, but the position is taken as cover. Abroad, yes, the renewal of Jaycee Carroll is expected, to whom it is intended to make a custom contracteven one that allows him to join the team with the season started, both to rest and to continue with his family. Williams-Goss, in turn, can also act as ‘2’, an important alternative given the construction of the squad. Sergio Llull, Rudy Fernández, Fabien Causeur, Jeffery Taylor and Alberto Abalde, who, as this course has shown, can perform in any of the outside positions, they would fill out the guard and forward positions, with one new addition awaiting: Adam Hanga. Again, changing Barcelona for Madrid and, again, with a lot of versatility at the service of the team.

On the inside, although he already joined the team during the final stretch of last season, it will start with Vincent Poirier. In his 13 games as white, he averaged 8.1 points and 6.8 rebounds. Together with Walter Tavares, he is expected to form one of the most fearsome couples on the continent. From that, precisely, Guerschon Yabusele arrives, from ASVEL, where he shared a track with Moustapha Fall and where, in addition, he had time to begin to weave a relationship with Heurtel, something that will be able to continue cultivating in the Olympic Games in Tokyo, with the French team. Yabusele, a very physical power forward, but dangerous on the perimeter (38.4% correct in the Euroleague), arrives to shore up the interior, but also to protect himself against the more than likely departure of Usman Garuba, on his way to the NBA. The one from Azuqueca de Henares will come out very well positioned in the Draft on July 29 and, from its surroundings, no other option is contemplated. Guerschon, faced with this situation, is also a player of great defensive intensity, who can defend multiple positions (‘2’, ‘3’ and ‘4’, mainly) and with the ability to dominate wide spaces with his body.

So far, there is only one incorporation confirmed by the Barça offices: that of the Turkish center Sertac Sanli, who has signed until 2023. Executioner of Barcelona in the Euroleague, he has averaged 7.8 points and 2.2 rebounds in the continental competition. In the Final fourYes, it went to 15.5 + 5 in 19 minutes. Major reinforcement, but lonely. At the moment. The official exits so far and the aforementioned doubt of Gasol force us to continue tracking the market. The closest arrivals appear to be at the base position. Rokas Jokubaitis, from the Zalgiris, would be very close to completing his signature. He is the penultimate Lithuanian talent, a 20-year-old organizer who already has experience in the highest European requirement. It is an express request of Jasikevicius, who already had him under his orders, being his main supporter. In this same sense, the Barça coach would also have given the go-ahead for Laprovittola’s landing, the umpteenth movement between the two giants. A very different profile, already 31 years old, but that can be complemented with the characteristics of Nick Calathes and Jokubaitis himself.

The section on casualties, meanwhile, is more extensive. Arrivals in the outer positions are largely due to to the departures of Leo Westermann (unofficial), who arrived to cover Heurtel’s gap, and the more than possible departure of Leandro Bolmaro, selected, last season, by the Minnesota Timberwolves and in the sports plans of the American franchise. Inside, Artem Pustovyi and Víctor Claver, although of relative relevance in the rotation, have also left a void. Above all, with the unknown of Pau. In this sense, the Catalans could focus their attention on new names for the forward and power forward positions. In them, they have been left without Nikola Kalinic, who interested both Barça and Madrid. The former Valencia player, one of the most sought-after on the continent in his position, has returned to the Red Star of Belgrade, where he already played in the 2014-15 season. Without this possibility and with all the names mentioned to be confirmed, the Catalan offices will have to finalize their staff in the current market, marked, without any doubt, by the Barcelona-Madrid flights, and vice versa.