Mancini “terrified” of “the greatest danger”! 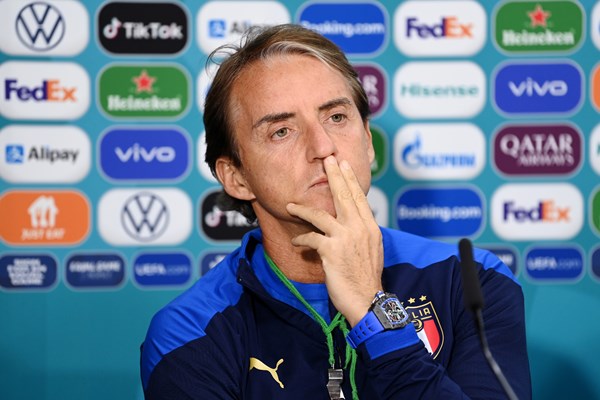 Anwar Ibrahim (Cairo)
Italy coach Roberto Mancini expressed his deep fear of the threat posed by Raheem Sterling in the big confrontation this evening “Sunday” between the Italian and English teams, in the European Nations Cup “Euro 2020”, and said in statements to reporters, that Sterling represents the greatest danger in the national team. “The Three Lions”.
The Manchester City winger played an important and prominent role in the march of his country, until reaching the final, where he scored 3 goals, and caused the decisive penalty kick that confirmed England’s 2-1 victory over Denmark in the semi-finals.

But Mancini admitted that Sterling is not alone in the danger, because the England team is strong and, apart from its starting line-up, has an excellent “bench”, and said: We have reached the final, so we are also strong.
He added: Sterling has improved a lot, he is very fast and an excellent dribble, and we have to watch him well, but there is also Harry Kane, the “dangerous sniper”, and together they constitute the danger in the English attack.

Mancini admitted that the “Three Lions” are more ready and stronger physically, but football is played on the ground, and on small details, and sometimes the least physically ready wins, and we hope to play our ball to win, and do everything in our power to win the title.
At the conclusion of his statements, Mancini expressed his great pride in what his team has achieved so far during this tournament, as he won all his matches so far, to complete a successful career that the Azzurri started more than two years ago, and there is only one step left today to achieve the achievement.