Man attacked a young man with a stone for no reason 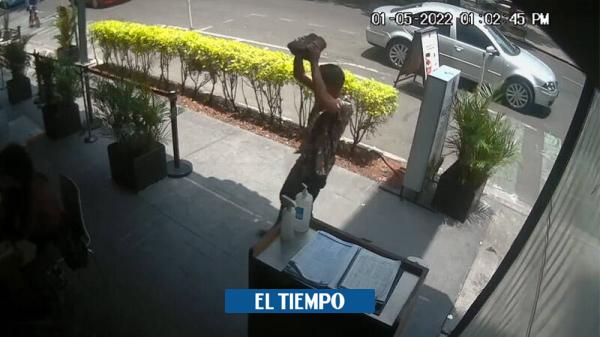 An assault was recorded in the last hours against a teenager in a restaurant in Mexico City, Mexico. The images from the security cameras of the commercial establishment show how a subject approaches with a stone in his hands and throws it at the young man without saying a word.

As soon as the attack took place, a man is seen leaving with the waiters to try to catch the assailant, but he fled.

The images were released by a user of the social network Twitter, who reported that a son of one of her friends had been the victim. “He is in serious condition at the San Ángel Inn hospital,” she wrote. In addition, she asked for help for the authorities to capture the man.

⚠️ WARNING of STRONG images. Today they attacked the son of a friend in Taquearte de Álv Obregón col. ROME. He is in serious condition at the San Angel Inn Chap hospital. We need help from a criminal and the authorities help us find the aggressor. RT Please! #NoMoreViolence pic.twitter.com/N2d3OcOUqc

The publication, which exceeded 20,000 ‘likes’ and 16,000 tweets on the network, led other people to recognize the aggressor and express that they had also seen him involved in other acts of intolerance.

Omar García Harfuch, Secretary of Citizen Security, said that it would be “a Central American who attacked for no reason.” Minutes later, he reported that the 39-year-old subject had been captured in the area by police officers.

“We are in permanent communication with the family. No violence of any kind will be tolerated,” she stated on her Twitter account.

As local media reported, In the search of the individual, at least ten doses of what would be drugs were found. For this reason, he was made available to judicial entities to answer for the attack recorded on camera.

(We recommend: Concern about fashion to cut the frenulum to babies).

How is the young man attacked?

He has no taste or smell right now

Andro Manuel, 20, was immediately taken to a nearby hospital. Family members commented that he remains stable and under observation by medical personnel. In addition, in a chat with the ‘Milenio’ television network, they called on other victims of the aggressor to file the corresponding complaints.

See also  We are committed to the development of the South-Southeast of Mexico: Concamin

“Right now he doesn’t have taste or smell, so we don’t know if he’s definitely lost it or it’s temporary. We are waiting for what they tell us”, commented Michelle Nava, sister.

The young man has moderate head trauma, so he is undergoing neurological monitoring to evaluate the effects of the stone hit.

The Mexican Prosecutor’s Office prosecuted the aggressor for the crime of drug dealing, upon finding a dose of drugs, and for intentional injuries. His legal fate is expected to be known in the coming days.

– The revelations of the former driver of Johnny Depp and Amber Heard in the trial.

– Kailia Posey, protagonist of meme and viral GIF, died at the age of 16.

– Bill Gates talks about his divorce with Melinda Gates: ‘I caused pain’.