Malvinas: 6,000 former soldiers claim to be recognized as veterans, but only 156 achieved it 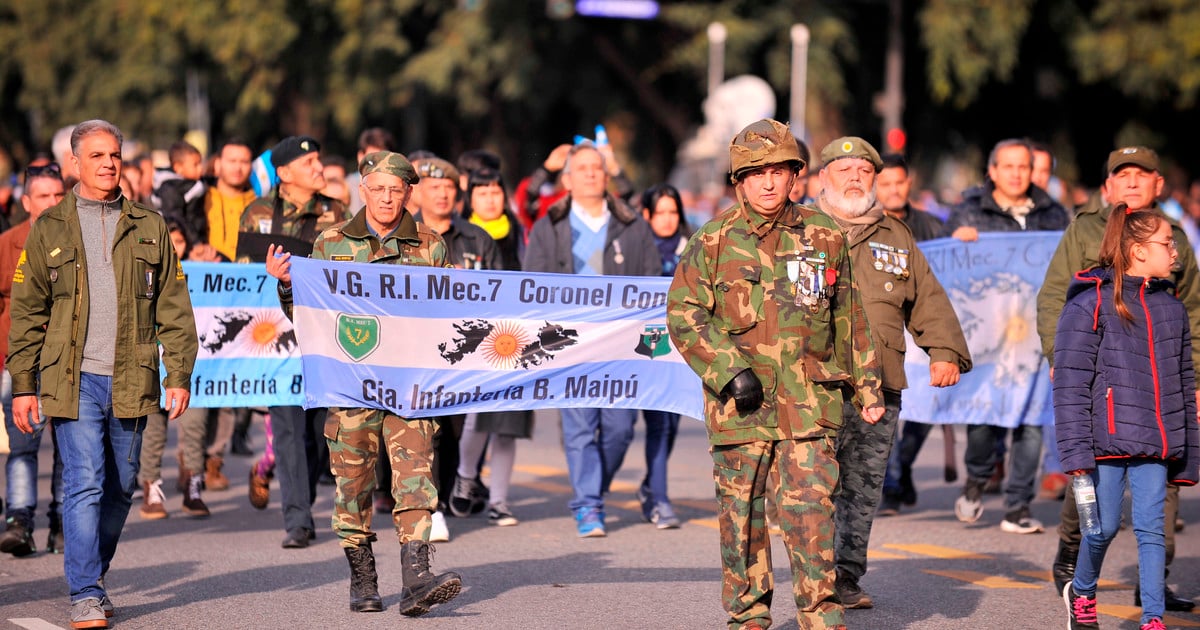 Through the courts and in presentations that began in some cases several years ago, some 6 thousand people seek to be recognized as Malvinas War Veterans (VGM) and access the benefits that are recognized as such. In the case of former conscripts, mainly the monthly pension equivalent to three minimum pensions, plus other provincial and municipal benefits.

The estimate from official sources consulted by Clarion is derived from another that indicates that there are a thousand causes, in which 5 or 6 people appear together to make the demand to the national State.

The claim is long-standing from the soldiers who remained on the continent during the Malvinas war, in many cases in vital functions but are not recognized as veterans.

According to figures obtained ClarionIn recent years, only 156 people achieved a favorable judicial sentence. That is to say, they are “veterans by judicial sentence.” In detail: 57 served in the Air Force, 63 in the Navy, and 36 in the Army.

“In each force there are legal cases on the subject, and the number of those who claim is increasing every day “an official source told this newspaper.

The last case that had an impact was that of Alicia Mabel Reynoso, what was it Air Force military nurse and served during the conflict in the relocatable field hospital mounted on Comodoro Rivadavia. In May, Chamber II of the National Chamber of Social Security Appeals granted her veteran status.

The chambermaids reasoned that not doing so was “discriminatory” for example, with respect to a civilian nurse who had provided support and is a VGM (especially since she is military personnel) and who, due to his health activities, could not be required to enter combat. They introduced the novelty of the gender question: “Thinking of only physical combat and excluding the work of the nurse not only makes her contribution to the war effort invisible, but also prolongs the persistence of stereotypes in society.”

However, the refusal to recognize as veterans those who remained on the continent It is an issue that has not had a crack. In the two terms of Cristina Kirchner, former continental conscripts they maintained a camp that was part of the landscape in Plaza de Mayo. The response of the Casa Rosada was that recognizing them would be “a moral and economic scam.” The situation did not change with the macrismo, nor with the current government.

There were dozens of bills in Congress – some seeking a staggering in recognition – but they never came to fruition.

Former “continental” soldiers in Plaza de Mayo in a complaint to the Minister of Defense, Agustín Rossi, but in the previous stage when it was in the last section of Cristina Kirchner’s administration. The “continentals” kept their camp in the Plaza for 10 years until 2018. For the CFK government, recognizing them would be “an economic and moral scam.” The macrismo did not change the position. A month ago a ruling by the Chamber recognized the Air Force nurse Alicia Reynoso as VGM, who served in the Comodoro Rivadavia hospital.

In the case of Nurse Reynoso, her situation was like that of so many who complain. For the Air Force, those who served in the hospital in Comodoro are not veterans, neither did the mechanics -for example- who on the continent prepared the planes that were going to fight in the Islands.

“Continentals are not VGM, that has always been the official position. By Geneva Convention, they are fighters, because they were ready to fight; but the law established that veterans are those who participated in effective actions, in a geographic area (TOM and TOAS) and in a given time, and the civilian personnel who provided support. General Galtieri and also politicians visited the Malvinas in April 1982: they are not veterans, they had no function ”, Clarion a retired senior military man, a veteran of the war.

There are 16 women recognized as war veterans: the group of 6 Army nurses who were embarked on Admiral Irízar (the surgical instrumenter Silvia Barrera, and her companions Susana Maza, María Marta Lemme, Norma Navarro, María Cecilia Ricchieri and María Angélica Sendes); former Ensign Liliana Colino, who was the only woman who stepped on the Malvinas when crossing at Hercules to evacuate the wounded; and female merchant ship crews who provided support. They complete the list two people who switched gender, one from the Army and the other from the Navy.

The VGM organizations – almost all of them – emphatically reject that the “continental” or “mobilized” are equated with them. And there have been fights in the middle of the street. For the latter it is pejorative that they are called “mobilized” and they claim the right to their seniority, to symbolic recognition and economic benefits. It was many thousands, south of the 42nd parallel.

The Supreme Court, lime and sand

Recognition via sentencing of a former combatant as a veteran it has not been an automatic passport to chain sentences. In 2015 it was believed that there was going to be a domino effect when the Supreme Court recognized as a veteran to Carmelo Antonio Gerez (Gerez case) NCO who had served in the control tower in Río Grande, Tierra del Fuego.

But a few months later the same Court ruled in the opposite direction with respect to former soldier Víctor Hugo Arfinetti who was assigned to Comodoro Rivadavia, considering as an unavoidable requirement “having participated in military actions”.

The Arfinetti case it included 32 former soldiers. The Court revoked the recognition of VGM that had been granted by the judge of first instance and later confirmed by the Federal Chamber of Córdoba.