Magical evening at the Colombian embassy in Washington 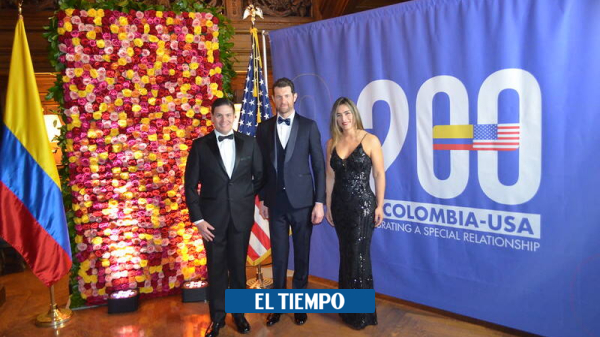 Colombia was the epicenter this weekend of one of the most popular events in the US capital.

This Saturday, after the famous White House correspondents dinner, Ambassador Juan Carlos Pinzón’s residence in Washington it was one of only three venues that offered the typical parties that follow after this prestigious black tie event.

Read More: Migration to the US: This is how it goes for Colombians who cross ‘El Hueco’

More than 600 people, including journalists, Actors, administration officials and other luminaries of Washington society gathered at the residence for a lively evening that lasted beyond three in the morning.

Using as a theme the magical realism immortalized by Gabriel García Márquez and perhaps the popularity of Encanto, the new Disney movie based on our country, the house was adorned with yellow butterflies, lush vegetation and, of course, allusions to coffee and traditional food.

In the center, actor Jason Isaacs, known for his role as Lucius Malfoy in the Harry Potter films

See also  Iván Sosa: 'I arrive at the Giro d'Italia excited, to fight for everything'
Photo:

Among the attendees were Jason Isaacs, an English actor known for his role as Lucius Malfoy in the Harry Potter saga, the renowned FOX network journalist, Jennifer Griffin, and the actor and comedian Billy Eichner actor, among many others.

Among them Nelson Arboleda, Undersecretary of Health for Latin America.

The music was in charge of Eric Hilton, one of the members of the band Thievery Corporation who organized dj sets, the presentation of a brass band -typical of New Orleans- and a couple of songs with the singer and Grammy nominee KT Tunstall.

But there were also Colombian sounds by Confónica, a musical group made up of Carlos Alberto Guerra and Gustavo Marino.

Apart from the high exposure that the country had for hosting the event, Ambassador Pinzón took advantage of the occasion to highlight the celebration of 200 years of bilateral relations between the US and Colombia, that are celebrated this year and that has been the reason for several events that although being carried out in the American capital.

Although the ambassador lent the house, the costs of the event and its organization were covered by Craft, a public relations company that obtained the sponsors.

The French embassy and the Resch Center, at the Kennedy Center, were the other venues that offered evenings to “finish off” the popular dinner promoted by the White House correspondents’ association.

The dinner, one of the landmarks of the US capital, lost momentum during the presidency of Donald Trump, the only US president, who decided not to attend in protest at the jokes that are usually made at the event and of which he was white for many years.

In addition, it had been suspended for two years as a result of the Covid-19 pandemic.

On this occasion, President Joe Biden did attend and took the opportunity to throw a few jabs at his predecessor. ¨We had a horrible plague, which was followed by two years of Covid. Just imagine if my predecessor had come to this dinner. That if it would have been equivalent to a coup d’état¨affirmed the president.

See also  Weather Valtteri storm equalized the snow situation between southern and northern Finland: by Sunday evening, most snow had fallen in Espoo and Hyvinkää

Biden also poked fun at himself and reporters, saying he was delighted to attend a dinner with the only group of Americans with lower popularity ratings than his own.

-European Union prepares new sanctions on Russian oil after cuts
-USA: Supreme Court would overturn the right to abortion, according to ‘Politico’