Maduro: “Venezuela and China are closer than ever” 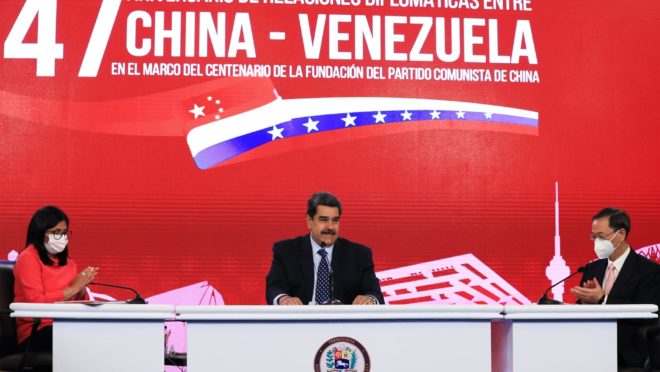 The dictator of Venezuela, Nicolás Maduro, emphasized this Monday, on the 47th anniversary of the establishment of relations with China, the union between the two countries, which he classified as “true brothers”.

“Today, 47 years from that date (…) I tell you, President (of China) Xi Jinping, today we are more united than ever. China and Venezuela are in good health, and China will go through this century setting an example.” Maduro said at a commemorative event which was also attended by the ambassador of the Asian country, Li Baorong.

For that reason, and in “times of attack, threats and harassment” that he considers the two countries are experiencing, Maduro stressed that China has “all the solidarity and strong support of the Bolivarian revolution”.

At the event, which also celebrated the centenary of the Chinese Communist Party (CCP), he thanked the Asian country for having “openly and loudly condemned” in the United Nations system the “illegality” of US sanctions against Venezuela .

“China is being transformed into a kind of enemy of humanity. We must pay attention to these campaigns, it is simple envy and selfishness of the West that cannot accept that, from ancient China, a power of peace, brotherhood and cooperation emerges”, declared Maduro .

Faced with this scenario, Maduro said that China can count on Venezuelans “like true brothers” in South America “now and forever”.

In South America, and during the 2003-2013 commodity boom, the China-Venezuela relationship provided Chinese and Venezuelan political and business leaders with the opportunity to highlight the supposed benefits of an oil-based natural resource complementarity.

At the same time, the relationship epitomized an elective affinity between the rising leadership of South America’s New Left, led by Venezuelan Hugo Chávez, and China as a new alternative diplomatic and trade partner in the region, he said. report on relations between the two countries in the 21st century by Matt Ferchen, director of Global China Research at the Mercator Institute for China Studies, published last September.

The China-Venezuela relationship really took off in the early 2000s. “Trade and diplomatic relations based on loans and oil were built exactly when Hugo Chávez was building his experience in Latin American populism in the 21st century,” recalls the author.

Between 2007 and the time of Chávez’s death in early 2013, the CDB (China Development Bank) lent Venezuela nearly $40 billion, an amount that far exceeds China’s official energy financing for any other country in the country. world at that time, much less anywhere else in Latin America.

Starting in 2007, the CDB signed a series of loan agreements with Chavez and PDVSA under which the loans would be repaid by selling oil to China.

The researcher points out that signs that not all was well in Venezuela or in the China-Venezuela relationship began to appear long before Chavez’s death. Even before the global financial crisis, when Chávez was at the height of his power, the politicization and mismanagement of state oil company PDVSA had already put pressure on the country’s oil production.

“At the same time, even as Sino-Venezuelan diplomatic friendship flourished, China’s state bankers and national oil companies grew impatient with the lack of privileged access to oil exploration sources, which they believed should have been the result natural of high-level political ties – China had hoped to have preferential access to Venezuela’s vast Orinoco Belt oil reserves, but due to the chaotic state of Venezuela’s oil sector and PDVSA in particular, Chinese companies were unable to to pump significant new flows of Venezuelan crude oil,” the report says.

After Chávez’s death, and against a backdrop of falling and volatile global oil prices from 2014, his successor, Nicolás Maduro, soon proved not to be as dynamic a political and diplomatic leader as Chávez, whose leadership was also “highly polarizing and destructive,” says Ferchen.

At least since 2014, as a result of its own mismanagement, lack of investment in PDVSA and the difficulty of accessing dollars to import necessary equipment, due to Byzantine exchange rate policies – a situation that was exacerbated by US sanctions on oil exports Venezuela – Venezuelan oil production and exports have fallen to historic lows.

“In fact, the actual flow from Venezuela into Chinese hands has always underperformed claimed promises of up to one million barrels a day, rarely reaching half that amount (equivalent to less than 5% of China’s oil imports in any given year )”, details the article.

In the wake of the dramatic drop in global oil prices in 2014, Venezuela was forced to ask for renegotiated terms on its debt to China, essentially entering a form of de facto default. As a result, Chinese borrowing declined.

The article reports that while keeping accurate and up-to-date figures on China’s oil-related loans to Venezuela is a challenge, due to the opacity and secret, high-level negotiations on both sides, it is estimated that Venezuela still owes about of $20 billion in oil-linked debt payments to China.

And yet, since 2014, China has not completely cut off the flows of financial or diplomatic support to Venezuela. China has vehemently refused to publicly criticize or abandon the diplomacy in support of the Maduro government or even admit that there are problems in Venezuela or in the Sino-Venezuelan relationship. When pressured, Chinese foreign policy officials have consistently asserted that they maintain their trade and diplomatic commitments to Venezuela, do not interfere in Venezuela’s internal affairs, and expect stability there.

Chinese financing projects were used in Chavista political campaigns. Chávez and Maduro used Chinese-funded assets in grandiose demonstrations of a policy of generosity, donating Chinese-branded appliances and construction of Chinese-owned housing projects, while a high-profile Chinese-backed rail project derailed due to poor planning and corruption.

While new official funding flows from the CBD have been cut since 2016, a wide range of other negotiations have taken place, including a 2019 agreement that focuses on energy cooperation. Other sectors are drawing attention: for example, on a 2018 visit to China, Maduro signed 28 agreements, including some for satellite cooperation and telecommunications equipment from the company ZTE.

“The core element of the relationship, the oil trade, has been increasingly forced into contortion to avoid US sanctions, while Chinese investments in Venezuela’s power grid have failed to secure stable energy supplies,” the report says. .

China provided Venezuela with medical equipment in the midst of the coronavirus crisis, but that assistance cannot offset the crisis in Venezuela’s healthcare system prior to the pandemic. To further underscore the political cooperation between the two countries, as part of the 2018 visit, Maduro also signed a memorandum of understanding to participate in China’s Belt and Road Initiative (BRI).

However, all elements of that deal have been controversial: the deal with Sinovensa has been undermined by corruption scandals, ZTE has provided Maduro’s government with digital surveillance technology, and Venezuela’s membership of BRI is yet another provocation at a time of major US concern.