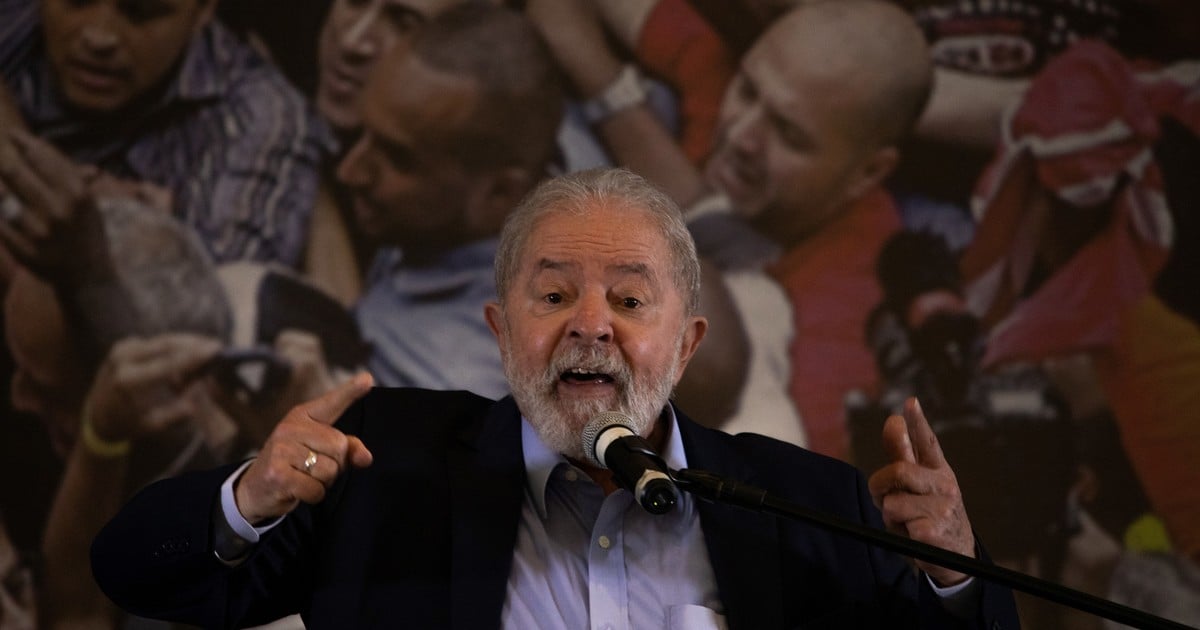 Former President Luiz Inácio Lula da Silva has a clear path to be a candidate for the Presidency of Brazil next year and this Friday he cried in front of his main allies, in a virtual meeting, saying that his objective “was not political”, but to “clear the name of the family.”

Lula already talks with businessmen and religious sectors for a possible candidacy presidential in 2022. Acts that concern advisers to President Jair Bolsonaro, who is seeking re-election, and who now, due to “the Lula effect”, will have to intensify his dinners in Brasilia with groups of businessmen and conversations with evangelicals.

Wearing a chinstrap, Lula participated this Saturday in the food distribution campaign at the Metalworkers Union in São Paulo. “Hunger returned to the country due to the irresponsibility of this government,” he said.

The statement of the former president, on Friday, when he cried in front of former president Dilma Rousseff and the president of the Workers’ Party (PT), Gleisi Hoffmann, occurred a day after the Supreme Federal Court (STF) confirmed the annulment of his convictions in the anti-corruption operation Lava Jato.

The majority of the Supreme Court magistrates (8 votes to 3) understood that the justice of the state of Paraná – that is, the former judge Sergio Moro – does not have the authority to judge the cases against Lula.

If new convictions against Lula arise in lower instances and again reach the Court, the debate on the political rights of the former president it would be renewed, but today it is an unlikely possibility.

President of Brazil for two terms (2003-2010), Lula returns to the political game with 18 months to go before the October 2022 election. An eternity for Brazilian political guidelines.

For now the bid is between Bolsonaro and Lula. A poll released a week before the Supreme Court’s decision indicated a technical tie between them. According to XP / Ipespe, consulted by investors, Lula has 29% intention to vote for the Presidency and Bolsonaro 28%.

The political struggle between the president and the former president occurs when Brazil registers almost 369 thousand deaths from coronavirus, a figure higher than the population of Petrópolis, in the Sierra Fluminense that still preserves palaces from imperial times.

Investigation by in Congress

The daily drama of lives that could have been saved and that moves Brazilians – especially those opposed to Bolsonaro – was added to the establishment of a Parliamentary Investigation Commission of the pandemic.

The “CPI of the covid” will have as rapporteur an enemy of Bolsonaro, Senator Renan Calheiros, who is an experienced politician and has already been in the crosshairs of Justice. In Brazil, it is often said that you know how a CPI begins, but not how it ends.

On Friday, just after being elected to be the Commission’s rapporteur, Calheiros said: “Bolsonaro was wrong and was not responsible.”

A protest in Brasilia against Jair Bolsonaro and his management of the coronavirus pandemic, on Friday. Photo: REUTERS

The rapporteur is the one who suggests what decision should be made by those who make up the investigating commission. In the “CPI of the covid” the “Bolsonaristas” are in the minority.

The prestigious doctor Drauzio Varella, known for his participation in Brazilian television, said that the tragedy in the country was intensified “by a president who sets the example of what must be done to spread the epidemic.”

In a conversation with a Peruvian analyst, after the first presidential round in the Andean country, he asked the question that every foreigner asks or suggests facing a Brazilian: “What explains the support that Bolsonaro maintains?”

That day, a group of supporters of the Brazilian president had invaded a radio station in the state of Pernambuco and threatened communicators who criticized Bolsonaro’s management in the pandemic.

Former President Fernando Henrique Cardoso pointed out that Lula’s return to the political game can benefit Bolsonaro. A calculation that is still not entirely clear, but that would be based on the fact that the leader of the Workers’ Party has high rejection rate among those who understand that his government had “historical corruption scandals”, as one of these critics says, such as the ‘mensalão’.

Lula has support among those who miss his government and understand that he has been “a victim of Moro’s persecution.” In other words, in the current scenario, the ‘antiLula’ and the ‘antiBolsonaro’ speak loudly.

“If Lula is a candidate, the second round would be between Lula and Bolsonaro,” say analysts from the Getúlio Vargas Foundation.

The political doubts today are whether there is room for a candidate from the center to the Planalto Palace. The bolsonaro wear In the administration of the pandemic it was even more evident when his adversary João Doria, governor of São Paulo, took the lead to produce the CoronaVac vaccine – the one from the Chinese laboratory Sinovac – at the Butantan Institute of the state.

Bolsonaro scoffed at the initiative. Today, a large part of vaccinated Brazilians, even in other states, received the Coronavac. There is also the AstraZeneca, produced by the Fiocruz foundation in Rio de Janeiro. But, there are more than a million Brazilians who did not show up to receive the second dose of the immunizer.

In the middle is the fact that the social exclusion, as in other countries, increased in the pandemic. “There are people who say they don’t have to eat. Brazil hasn’t seen anything like this for years, ”said a former Cardoso government adviser.

An investigation by the Data Favela showed that in February, with the end of the “emergency aid” -the subsidies that the government gave due to the pandemic- 67% of the 16 million Brazilians living in favelas had to eliminate food shopping or cleaning material.

Last month Congress approved financing that will allow, once again, the collection of aid, but of only around 250 reais (about 45 dollars) when last year they were 600 reais (about 108 dollars).

The same queues are made to collect them. This fact can fuel support for Lula. The social inclusion carried out in his government is still in the memory of the excluded. But, curiously, many of them today declare their loyalty to the adversary of the former union leader: Bolsonaro.

Restaurants in Catalonia may reopen to serve dinners