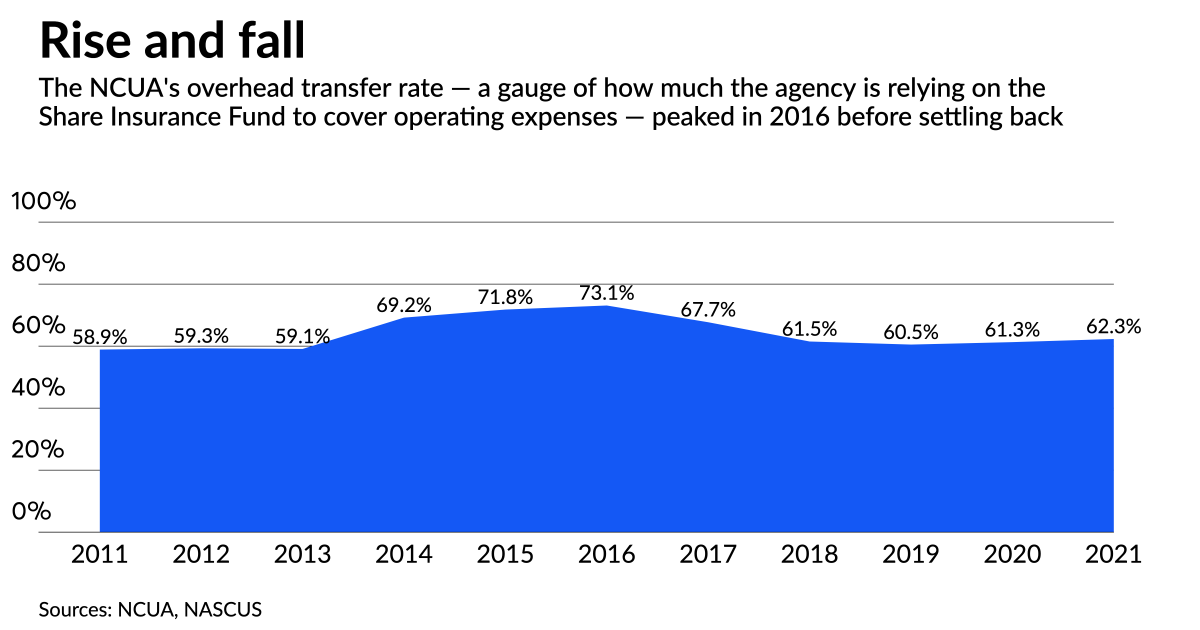 Lucy Ito could take credit for many accomplishments made by the National Association of State Credit Union Supervisors during her seven years at the group’s helm, but she might ultimately be remembered most for mastering a concept few seem to understand.

Ito last month announced plans to retire at the end of the year as president and CEO of the trade group, which advocates for the primary regulators of 2,020 state-chartered credit unions that hold about $ 934 billion of assets. She has been the organization’s leader since 2014.

Almost right from the start, Ito went to work to lower the National Credit Union Administration’s overhead transfer rate – the rate by which funds are transferred from the Share Insurance Fund to the NCUA’s operating fund. The NCUA sets the rate to cover its own costs, much like payment card networks set interchange rates for accepting credit cards. The Share Insurance Fund pays a dividend back to credit unions, so there is less money to fund that dividend if the overhead transfer rate is raised.

NASCUS argued that the rate had become burdensome to state-chartered credit unions, and that the process for setting the rate was too opaque.

“It has huge ramifications for both state and federal credit unions,” Ito said. “The more the NCUA relies on the Share Insurance Fund to cover its expenses, that means taking more credit union money.”

Pat Keefe, former vice president of communications for NASCUS, said the OTR has been one of the “most important, arcane, misunderstood and long-lasting issues” that NASCUS and state credit unions have tackled.

“I’ve worked for credit union trade groups since 1984, and the issue was being argued even then,” he said. “Like the weather – although there was a lot of talk about it – nobody really did anything about it, or at least, little was done to effectively address it.”

But Ito proved her ability and effectiveness as an advocate by taking on the issue for the state system, and making changes happen on their behalf. Keefe said she mastered the issue, which only a select few among credit unions have successfully done over the years.

She then went to work in explaining the impact of the OTR on the state system to members of the NCUA board – particularly Chairmen Rick Metzger and J. Mark McWatters.

“She did it in such a way that they got it, which opened the door to the NCUA staff becoming more accommodating to changes to the OTR methodology,” Keefe said.

Ultimately, a proposal was made and adopted by the NCUA board in 2017, which resulted in a complete overhaul of the methodology to be more fair, more equitable and more transparent.

“It was the first time in years – at least in the 37 years I’ve been around – that real changes were made,” Keefe said.

Transparency was lacking in how the NCUA calculated the rate, but the regulator has made progress in that regard of late, according to Ito. But it still could be improved. We still don’t understand a few things about how the calculation is made and what the assumptions are, ”she said.

The NCUA did not respond to a request for comment by publication time.

But Debbie Matz, former NCUA board chairman, said Ito is the consummate professional, always well informed and articulate. “Though we did not usually agree on the overhead transfer rate, I can say unequivocally that she represents her members very well,” she said.

Ito is most proud of deepening the partnership and relationship between NASCUS and the NCUA. The two sides signed a document of cooperation in 2019.

“It’s much better today,” Ito said of the relationship.

NASCUS hired D. Hilton Associates to conduct a nationwide search for its next leader.

Ito said she will not have a role in helping to select the organization’s next CEO but believes that person, above all, needs to be passionate about how the dual-charter framework between state-chartered and federally-chartered credit unions should work.

State regulators and credit unions should be able to work together to solve problems, Ito said. Her replacement should be willing to listen to the credit unions themselves about how to write rules and how to supervise, she said.

“It’s so easy to think of the regulators and the regulated as being in a confrontational relationship, but they’re actually very much alike and have shared objectives,” she said.

The pandemic accelerated consumers’ acceptance of new ways of doing things as well as their expectations for more technology, Ito said. “Probably in one year we got to where it might have taken us another four or five years normally,” she said.

Additionally, examiners and credit unions were both surprised throughout the pandemic at how effectively supervision could be handled remotely. There are still situations where examiners need to be on site, but both sides learned that resources can be better allocated by handling some regulatory issues at a distance, she said.

On the subject of state-chartered and federally-chartered credit unions, it’s difficult to argue that there’s an even playing field today, Ito said. The NCUA plays both the roles of charterer for federal credit unions and insurer for both groups. Ito would like to see greater clarity on the NCUA’s role.

On the issue of the banking industry’s continued opposition to the credit union tax exemption, Ito said the two industries feature completely different business models and “if credit unions have it so good, then banks do have the option to convert to a credit union charter, ”She said.

So where does Ito go from here?

Her husband, Rob, is a chemistry professor at UC Irvine, so she often travels back and forth between homes in Arlington, Virginia and southern California. She calls it the “bi-coastal cha-cha-cha.”

“What’s next for me is to spoil my husband rotten because he’s really shouldered a huge responsibility in keeping households in two different cities,” she said.

Still, Ito said she will miss NASCUS but believes that this is a good time to hand the reins to a new leader.

“We still have so much left on our to-do list,” she said. “But I think NASCUS is on a stable path financially. So I feel like we’re in a good place even though there’s a ton left to do. “