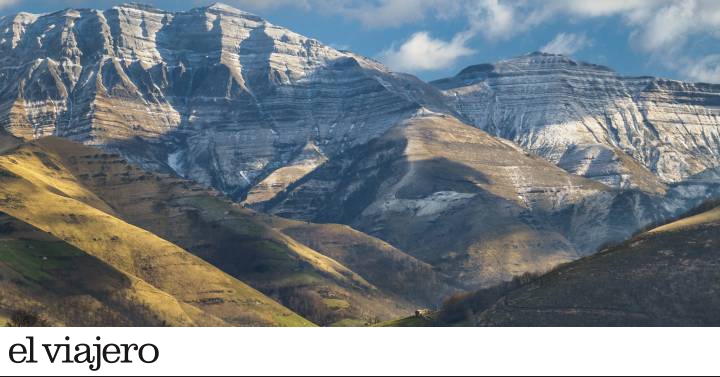 The narrow road lingers for almost 20 kilometers along the Miera River, as if the contrast of its waters and the gentle curves of the road announced the first destination. Not long ago we have left the Cantabrian town of Liérganes, but when leaving the narrow canyon carved out by the riverbed and reaching San Roque, an imposing landscape of rocks and green slopes unfolds without warning.

San Roque de Riomiera It is one of those tiny villages with stone houses around a church and the bowling alley, the soul of the Valleys Pasiegos, a region spilled by the headwaters of the Miera, Pisueña and Pas rivers. In San Roque the Route of the Pasiegas Cabins, a circular path that, in just two hours of walking between birch and oak trees, passes through several typical cabins. The stone walls and roofs of these symbols of rural heritage served as a refuge for the shepherds during the moult, the time when they moved cattle through different pastures. Roads and technology put an end to nomadic life, but the 10,000 huts dotting the valleys, some still with cattle, many abandoned and others restored, contain the old essences.

The farms divided by stone fences of perfect geometry continue to define this area shaped by livestock activity, although once these slopes were covered with forests. The Royal Artillery Factories of Liérganes and La Cavada swallowed, from the seventeenth century, more than 10 million trees to melt the guns of the Royal Navy, and those oak and beech forests were only scattered in some points. Everything else is green. At the foot of the port of Lunada you can still see the Casa del Rey and the remains of the Resbaladero, two centuries-old infrastructures of the logging company that depleted the area. A little further up, following the scrapped road towards the province of Burgos, some steps lead to the viewpoint of Covalruyo, a beautiful natural balcony surrounded by pasiegas cabins, the scratch of a path and a penetrating silence: the summary of the pasiego spirit.

The Valles Pasiegos have been so isolated that the Jesuits sent, at the end of the 16th century, a mission to evangelize their inhabitants. Today the mountains are connected by winding roads such as Alto del Caracol, the link that joins the rugged lands of Miera and the Pisueña plains. Along the way there are solitary cabins, green meadows that turn yellow in the heights, herds of goats ruminating the banks and a last stretch that, on its descent towards Selaya, reveals an undulating horizon.

Upon touching the bottom of the valley, the aroma of grass and freshly milked milk intoxicates the traveler. On Selaya are the houses of The male Y Joselin, the small family factories of quesadas and sobaos, and on the banks of the Pisueña, where livestock has sculpted its traditional character, there are also architectural highlights that began to spread from the 16th century. The cubes with coats of arms that propped up the estates of the nobles, the palaces of Donadío (in the Plaza de la Colina) and of Soñanes (in neighboring Villacarriedo, today converted into a hotel; abbahoteles.com), and the mountain houses with family shields, such as the Casa del Patriarca, the Archbishop and Inquisitor General José de Arce Rebollar, are part of that old legacy.

The religious trail in the valley is also not lacking, and in a meadow on the outskirts of Selaya, escorted by an oak grove and a stream, rises the Sanctuary of Our Lady of Valvanuz. Next to this historic hermitage whose patron saint is honored in large numbers every August 15 is the Casa de la Beata, which has been converted into a small museum about the broodwives, those pasiegas women whom the nobility and royalty served, until well into the 20th century, to breastfeed their children.

At one end of the Braguía viewpoint, between the Pisueña and Pas valleys, the Castro Valnera (1,718 meters). The poet Gerardo Diego, who always honored his Cantabrian roots and dedicated verses to the Miera Valley, the Pasiego cheese or the Cuévano, looked up from here and thought that the snow he saw on this mountain was his own blood. The snows continue to cling to Castro Valnera while we run, for 10 kilometers, between meadows, cabins and cattle. The road crosses the river and before entering Vega de Pas appears the Ethnographic Museum of the Tres Villas Pasiegas (San Roque, San Pedro del Romeral and Vega de Pas). It is an 18th century house set up as a cabin where objects and farm implements are exhibited, so a visit involves immersing yourself in a culture whose origin is diluted in the past. Because the pasiega inheritance, yes, it is enclosed in enigmas, in the silent character of its inhabitants and in a string of local surnames. But also in the customs that continue to beat in these lands.

The center of Vega de Pas It has its cobbled square and its 17th century church, its typical bread cakes and its stone houses with wooden galleries and flowery balconies, a ghostly silence only broken on weekends by tourist traffic and smudged by the smoke from the chimneys. . There is also a monument as a tribute to Enrique Diego-Madrazo, who after half a lifetime of travels through Europe, censorship and professional prestige founded a sanatorium in 1894. Known as Dr. Madrazo, like those Indians who returned with wealth and love to his land intact, he never forgot that he had been born on the shores of the Country.

The first babbling of the river are small streams that soon form that stony bed that also inspired Gerardo Diego. The waters rise and rush through the mountains, then they enter Vega de Pas and, after baptizing much more than a region, they continue to flow “on the way to Puente Viesgo, always dreaming of a child.”