Lorenzo Caprile: “Fashion is a petty industry, we play with the vanity and insecurities of the human being” 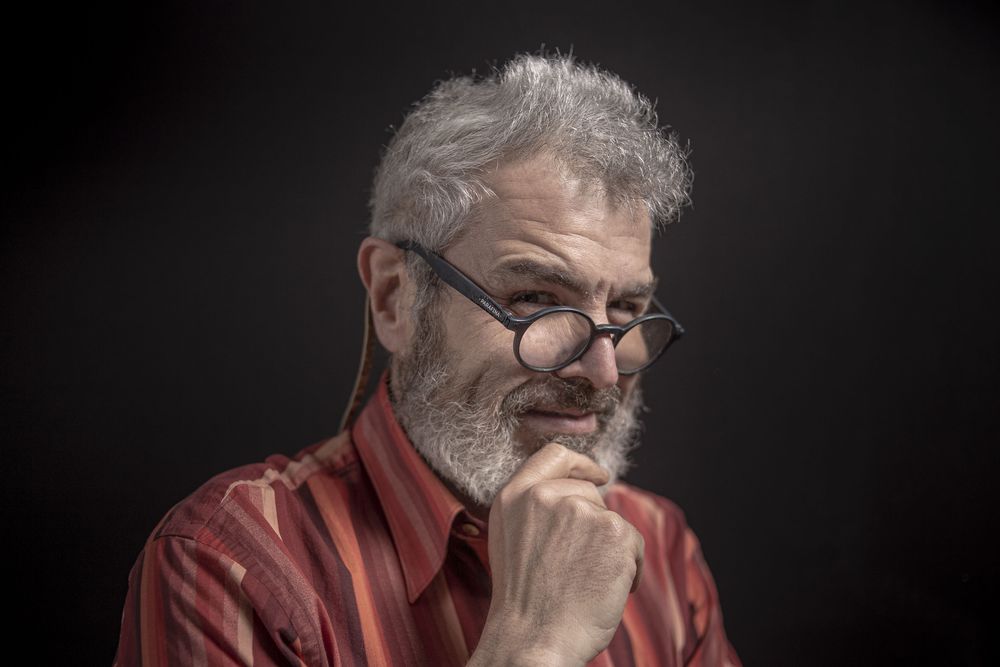 Lorenzo Caprile (Madrid, 1967) was in the media before he was famous. His creations for Infanta Elena, Infanta Cristina or Queen Letizia were dissected for years in the fashion and heart press and as an interviewee or guest at social gatherings he was always one of the most generous conversationalists with the press. But three years ago television discovered it. It had to happen: with his very personal voice, his speech as cultured as it was unpredictable and a perfect appearance for imitators to emerge (happened in Leit Motiv), Masters of sewing made it known to the general public. The format, called to do by the sewing machine what Masterchef made for the kitchen, it has now been four editions with an audience that is not massive, but loyal and passionate (over 11% of Compartir still faced with Turkish soap operas and reality ultrahormonized).

“I don’t want to be an urbanite or a firecracker, but in Madrid people are more used to meeting familiar faces and they leave you calmer. I notice fame more when I go abroad ”. He tells it in one of the terraces of the hotel in the center of the capital where he lives, from which he can see the extensive garden with palm trees and fountains of a convent and an official building in which, Caprile comments sarcastically, “they do things very rare at night ”. Of his life in the hotel he has often spoken and there is not much epic in it (“the house was falling on me”, he summarizes), but more interesting is what happened when the pandemic closed them all in Spain: “In the hotel The owners of the building also live, so they let me stay. I have the best landlords in Madrid ”.

Masters of sewing has broken many myths for viewers about the world of fashion: this season we saw a former boxer among the contestants. Have you broken any for yourself from within? I want to make a nuance: the program is called Masters of sewing, do not Masters of fashion. What the show is accomplishing, and I’m so glad, is breaking a lot of myths about the world of sewing. It is unfair, and also sexist, that we are not afraid to go to the Leroy Merlin and set up a shelf at home or but to raise it down to a pair of pants, which is bullshit, that you have to go to a Retoucherie [una cadena de arreglos textiles]. We are making people lose the fear of standing in front of a sewing machine and fixing a shirt that is too big for them. And I’m not just talking about men: sewing, historically, has been a thing of men and women. Moreover, at the beginning of our trade, in which Spain was a pioneer, women were prohibited by statute from being seamstresses.

You always claim the term “dressmaker” versus “designer.” It is that it is completely wrong, a bad translation of fashion designer. I say dressmaker, it is the word that is in the dictionary. A dressmaker designs, but we do many more things, not just the drawing. I think that is evident in the program every Monday, that the little cartoon is the least of it. When I go to give lectures and classes I always say: “If what you really like is drawing, become illustrators.” I would like to have Jordi Labanda’s current account!

Have you met many designers who have never sewn a button? Unfortunately if. With marketing and surrounded by a good team …

Here Caprile castles and retraces his steps to think in more terms he doesn’t like about his own industry. “When they say atelier instead of workshop I get on my nerves. They think that saying the same thing in English or French goes up a notch! I remember a talk at Fundeu in which someone was talking about steamer [el artefacto de vapor para planchar prendas colgadas], and I yelled: ‘But it’s a fucking iron!’ When I remind you that in your own program you often hear the word upcycling, castles again: “And I always get angry with Maria! [Escoté] and with [Alejandro] Palomo! That is the recycling of a lifetime! You are going to tell me, that I am the youngest of seven siblings. Until they bought me new clothes, imagine. And there I was a pioneer with the genders, or the sexes, or whatever is said now. I inherited indistinctly from my brothers or my sisters. Did it fit me? Well palante”.

What do you think of the term influencer, the great neologism of your industry? I try to use it as little as possible. There have always been icons and models, from Marie Antoinette, Isabel Preysler, Marisol, Lady Di, Grace Kelly, Marilyn Monroe, Jane Birkin, who even has a bag with her name on it! Within that infinite world there are very good people, mediocre people and very bad people, as everywhere. What happens is that before that was produced spontaneously and now thanks to the networks, or despite them, they have become professional. And some of that freshness has been lost. You always have doubts: is this person recommending this to me because he really thinks about it or because there is a check behind it?

Returning to the genre thing: his partner Palomo has taken that idea to prime time. In fact, it is resurrecting garments that were part of the men’s wardrobe and had been forgotten because of the famous great resignation of the 19th century. Men, with their fashion, have competed with women since the beginning of time. The lowering of the volume in our appearance is a very recent thing, from the first Industrial Revolution. I don’t know if the feminists here will be mad at me, but in the animal world it is the male who has the most impressive plumage and appearance. Females are usually very feucas all. Look at the hen and the rooster! The man, at one point, took a step back and all that privilege was given to women in exchange for completely curtailing their freedoms and rights. “We let you entertain yourself with this, but nothing more.” Thank goodness that is starting to change.

Lately it is noticed that public figures are cut when talking about certain topics or with a certain tone in interviews in case they say something that is misinterpreted and criticized on social networks. Does it happen to you? It scares me later, but not at the moment. Then I think: “Oh, they screwed me up, they are going to turn me green.” But if you said it, you said it. Before criticism came in a more direct way. The Internet was born with two capital sins, two irreversible blemishes: anonymity and total free. Let them tell the musicians and writers. If to express an opinion they asked for a registration and an identification, the networks would be a space for civilized and constructive debate for all and not the jungle. Me on Twitter is that I don’t even get involved.

Did you always want to dedicate yourself to this or as a child did you have other plans? Yes, I regret it every day, but yes.

Why? Because it is a very tough industry. One of the meanest that exist. We play with very sensitive and sinister materials: the vanity of the human being, their insecurities, their desire to belong to a group, their aspirations … If you reflect deeply on all that, sometimes it is chilling.

And it has no solution? No. Fashion has always been cruel. In the end you dress to mark your territory, to establish a difference between you and the other. Its foundation is that.

Now are you talking about money? I don’t think it is a question of wealth or poverty. Now other messages are more important: “I am from this tribe and you are not”, “I think so and you do not”, “I am powerful and you are not.” That is more relevant than knowing if you have more or less money. Power has nothing to do with money, huh? eye! That is one of the great myths of contemporary culture.

But you were born into a wealthy family. Would your parents have let you dedicate yourself to this if you had been born in a humble one? Yes. The one who broke the deck with strange professions was my brother Pasquale, the photographer, and he did have a bad time because my father told him not to speak and it was my mother who interceded. When I arrived, ten years later, saying that I wanted to be a dressmaker, my father threw in the towel.

Talking to you so relaxed I am amazed at your edge fame. For what is this? In my world of brides, I do have a reputation for edge. I don’t mind admitting it. The moment of choosing a wedding dress is very special, the susceptibility is on the surface. Almost all women who decide to get married live the girlfriend moment for a few months: it seems that the only ones who get married are them and everything is a Douglas Sirk melodrama. And when they arrive at the workshop and suddenly I tell them that what they ask me has neither head nor tail, that that day is to be beautiful and not to take away likes On Instagram, their house of cards falls and they leave very angry. Some do not understand it, but others realize that I am doing them a favor. Maybe that’s why we’ve been around for 30 years. I put on the medal of considering that my wedding dresses all age very well. Look at Dona Cristina’s [de Borbón], that we see it until the soup, 25 years later. Even many media echoed that Meghan Markle’s was practically the same dress as Cristina’s.

You who are close to this world, what do you think of what’s going on with meghan and harry? They both seem spoiled to me. And it would be necessary to see if it is true what they say: if they put five million dollars free of taxes on the table, I say the barbarity that is necessary. We all have a price. But honestly, I’m not very interested in them either.

Is there a lot of politics in fashion? There I quote some words from Marx: “Fashion is the favorite daughter of capitalism.” Whoever says otherwise is either stupid or lying. There is a fundamental text for all of us who dedicate ourselves to this which is called Anti-capitalist Fashion Manual, from a publishing house that was so red, so red that it no longer exists. And whoever does not find that one that is read Fashionopolis, that is of an editorial they are putting out some wonderful fashion books.

I have the feeling that you are very conservative for those on the left and too modern for those on the right. Yes that’s how it is. Depending on where I am, sometimes I am superfacha and other times the red of the gang. But I, like Umamuno: “No.” To begin with, “no.” To this goodness and to this unique thought, to this absence of self-criticism and reflection, I will always oppose it. I, Unamuno forever. Look how it ended, poor man: alone and unclassified.

Vásquez: “Last year we had the best and we wasted it”

Room 3 and the rift paradox