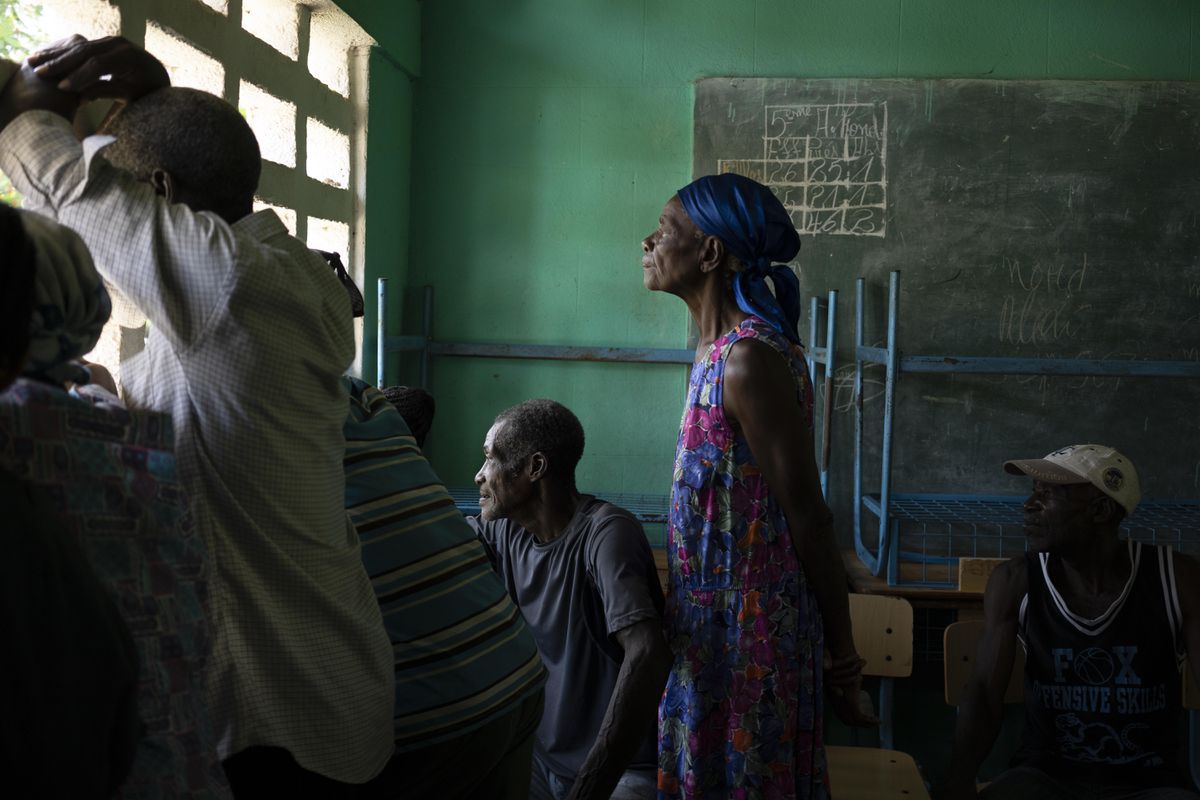 A truck with humanitarian aid from the Irish organization Concern stands on the bank of a river in the community of Maniche, in the mountains of the southern department of Haiti, while a mob ransacks its interior. “Give it to me, give it to me, you damn thing,” shouts a man to another with whom a folded awning is disputed, which he finally manages to take away. Meanwhile, several young people boarded the vehicle hastily throwing the items inside: toilet paper, compresses, toothbrushes, soap, bedspreads and awnings to protect themselves from the rain and heat. The powerless drivers simply wait for the looting to end in their cab, then close the doors and continue on their way.

A few minutes from there, in a rural school in that area in the mountains, about 40 minutes from Los Cayos, the World Food Program (WFP) The United Nations has mounted a major operation to deliver 50-kilo sacks of rice and peas, and cans of oil to more than 5,000 survivors of the earthquake of August 14 that left at least 177 dead alone in that town and dozens of farmers. disappeared when the land they worked on was washed away. The delivery, in which they also participate Unicef and the World Migration Organization with water containers, blankets and hygiene kits, she is escorted by a dozen armed police officers.

“Do you see how happy the people are?” Says Ruben Saint Louis, one of the young people hired by WFP to distribute the aid, while the first group, the elderly, load the food on motorcycles, donkeys and wheelbarrows to be taken home or, in many cases, to the tents that they have had to lift in front of the rubble of their homes. “The earthquake has affected me a lot because my mother has died,” says the 22-year-old. But God knows what it does. My house has broken down and I am sleeping on the street and I am here to feed my little brothers. They are 5 and 7 years old. They are children ”, he explains.

An outpost from the World Food Program who came to her community over the weekend found Saint Louis playing a soccer game with friends and offered to work with them for a day. His mission should be to unload the food, deliver it to his neighbors and help those who cannot with the 50-kilo bags to leave the school. “They asked me if I wanted to help and I said yes because there is nothing. No work. I just have to give them both food [hermanos]. That is why I have come. And you are also helping people ”.

These two scenes, developed simultaneously this Monday a few meters apart, reflect the problems that Haiti faces in distributing aid to those who lost everything in the earthquake. The powerful 7.2 magnitude earthquake has left at least 2,207 dead and more than 12,000 injured, in addition to nearly 40% of the population of the Sur, Grand’Anse and Nippes departments, in southeastern Haiti, with urgent humanitarian needs. The challenges range from how to face the insecurity that exists on the road that connects the capital, Port-au-Prince, with that southwestern peninsula to send aid and equipment, to how to protect against the looting of neighbors desperate for help that they feel is not coming. and, also, how to face the ghost that arose after the 2010 earthquake, when some international organizations were accused of wasting donations and sowing mistrust in some sectors of Haiti.

“Safety is obviously a concern,” explains Alexis Masciarelli, WFP spokesperson, referring to the assault on several trucks from other organizations in recent days. “We are working with the authorities. We have come for the last two days to speak with the mayor and explain to him everything we had planned to do and how many people we could help, to make sure that they had organized and that food was not going to be thrown along the way ”, he explains. This Monday, his organization gave aid to a quarter of the population, 5,000 of the 20,000 inhabitants of Maniche who arrived with a ticket that they had previously been given to collect food.

Canadian Morgan Wienberg, co-founder of the Los Keys-based child protection NGO Little footprints Big Steps, also believes that in order not to repeat the mistakes of the past, it is essential to work with local authorities and organizations. “Big NGOs, if they connect with people who already know those communities, they can mobilize aid through community leaders and they will be able to reach the most vulnerable and do it in a more organized way.”

In addition, Wienberg proposes that foreign organizations buy local products to strengthen the economy. “After the 2010 earthquake, one of the problems was that the aid was extended for a long time and that many of the products were imported from other countries and many businesses here were affected by that. So, if there are products here, it is important to buy them here, because you are offering what is needed and you are helping to rebuild the economy ”, he assures.

María José Venceslá, coordinator of the Spanish mission of Doctors of the World in Haiti, assures that the main problems that her team is facing, which is operating in several health centers in Nippes, are at the logistical level. On Sunday, his organization received hygiene kits in a 30-ton container from aid from the Spanish Agency for International Development Cooperation (Aecid). The main concern was how to send it from Port-au-Prince to the southwest due to the fear of passing through Martissant, on the outskirts of the capital, taken in recent months by armed gangs that carry out attacks and kidnappings. This weekend, the two main gangs said they had reached a truce to let humanitarian convoys pass, but the population did not just take their word for it.

To the security problems, we must add the looting and the fact that some roads were cut off by landslides, leaving remote communities isolated. “The aid is not arriving at the rate that we would all want as an urgent response. There are road issues being blocked, ”adds Venceslá, who believes that the local authorities did not take into account some limitations and did not ask for outside help, which is slowing down the response.

“Haiti has long been a forgotten humanitarian crisis,” says the head of the Médecins du Monde mission. “It seems that we only remember when things like this happen and then disappear again, but the situation has been very precarious for a long time and for a long time. The starting point is not the same as it could be in another country with other conditions ”, he warns.

Paolo Sorrentino: «I would not be a film director if Maradona had not existed»