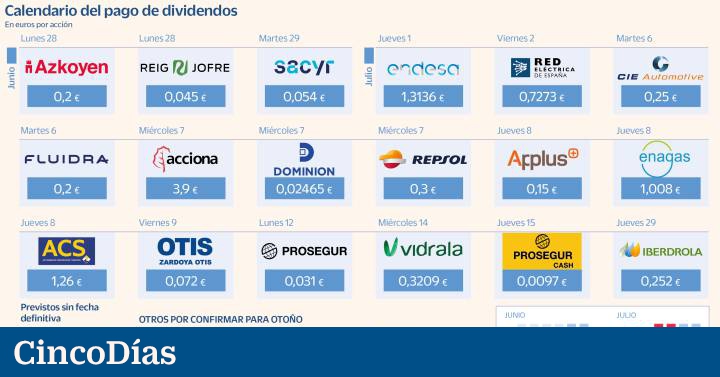 Summer is coming, the holidays and with it, also the dividends. In June, especially in July, many Spanish listed companies choose to reward the loyalty of their shareholders by paying a coupon. After the atypical summer that was experienced in 2020 due to the Covid-19 crisis and which led many companies to suspend their payments, others to cut them and many of them to vary the distribution schedules, this summer the listed companies will do the Effort to recover normality in its shareholder remuneration policies, as income and profits have also been reactivated.

In the coming weeks, a score of Spanish companies will distribute just over 5,000 million euros in dividends. To this figure must be added those already disbursed during this month of June and which exceed 2,000 million thanks in part to the 1,000 million distributed by Telefónica in its last dividend, but also to the disbursements made by CaixaBank, which made the first payment after the integration of Bankia, and those of Grifols and Acerinox.

In the coming weeks, very important Ibex securities have an appointment with the shareholders. Leaving aside the Telefónica coupon for June, in the coming weeks the largest disbursement will be borne by Iberdrola. The power company chaired by Ignacio Sánchez Galán will deliver up to 1,600 million euros in its next scrip dividend. This new election dividend will start on July 7 and the payment for those who request the dividend in cash will be made on July 29. Another power company, Endesa, will be another of the listed companies that exceeds 1,000 million euros with its next dividend. Specifically, it will disburse 1,390 million euros. Any investor who wants to collect this coupon has until next Monday to buy shares and be able to receive this payment of 1.3136 euros gross for each share.

In the distribution calendar for the coming weeks, the Repsol coupons stand out, which will disburse around 500 million and which will be paid on July 7; Red Eléctrica, which will distribute just over 400 million euros with its coupon of 0.7273 euros per share on July 2; the slightly more than 200 that Acciona will deliver on July 7, and another 260 million from Enagás, another of the companies that have not renounced to reward the loyalty of their shareholders.
Although payments are recovering from the crisis caused by the pandemic, they are still far from pre-Covid-19 levels. In 2019, Spanish listed companies distributed around 8,000 million during the summer, around 1,000 million more than in the summer season of 2021. “Obviously the most cyclical companies, whose results suffered a lot in 2020, will be those that show a greater increase in your dividends. They usually pay based on a specific pay out, although, as a consequence of the crisis, many have revised it down for this year, given the still high uncertainty and in order to maintain cash ”, explains Juan José Fernández-Figares, director of Link Securities analysis.

Many other listed companies suspended their payments and have not yet recovered them. This is especially the case in sectors linked to tourism. “Some sectors will take much longer to recover than others (travel is the most obvious), while any sector that continues to receive significant government support will have a difficult time paying dividends,” explains Jane Shoemake, Client Portfolio Manager at Janus Henderson.

“Travel and leisure is one of the sectors that is also hit the hardest, it will take at least one more year to rebuild its accounts and to be able to establish to what extent the end of the pandemic and the restrictions return its business to previous levels”, explains Patricia García , founding partner of MacroYield.

Within the tourism sector, IAG was one of those that traditionally paid dividends in the summer months, like Amadeus. Although these companies have not given clues as to when they will return to the dividend, FactSet forecasts suggest that, charged to the results of 2021, the Spanish online travel reservation company could pay 0.15 euros compared to zero euros for a year before.

The scrip dividend formula, far from disappearing, has become the great ally of listed companies that have made an effort to maintain shareholder remuneration. During these months, many companies have used this formula. In the scrip dividend that are currently underway, those of Reig Jofre stand out, who next Monday makes the coupon payment effective for those who chose this option, and those of the construction sector. Sacyr will pay the dividend next Tuesday 29 and will distribute 0.054 euros per share and ACS will pay the cash on July 8, for an amount of 1.26 euros gross per share.

But the key to recovering dividends is in the banking sector and its return to shareholder remuneration, after the limitations set by the ECB with the crisis. Bank of America is especially optimistic, expecting a dividend distribution in European banking of 186,000 million euros from this year to 2023. The US firm points to the “positive moment” in bank profits and adds that its estimates do not even include the 33,000 million dividends charged to 2019 and 2020 postponed due to the pandemic.

The ECB established a first limitation in March 2020, urging banks to forego the payment of dividends. Last December, it raised its hand allowing banks to deliver a maximum of 15% of their accumulated profits from 2019 and 2020 this year, a limitation that is in effect until September.

At Bank of America, they estimate that European banks will already distribute 20,000 million euros among their shareholders by the end of the year and estimate that the remuneration they will receive between now and 2023 will be more than four times higher than that received between 2016 and 2018, previously to any effect caused by the pandemic. In addition, they point out that their estimates contemplate a return to a normalized pay out of 50%.

Despite the effort that the listed companies are making to recover the dividends prior to the crisis, experts believe that it will take time to recover those levels, with sectors still affected such as tourism or banking. For Janus Henderson’s Jane Shoemake, “there will not be a significant return on bank dividends until 2022 has ended, so they will be paid in 2023. Therefore, given the size of the banks in Spain, the total of Spanish dividends will not return to 2019 levels until 2023 at the earliest ”. Globally, the recovery will come much earlier and the firm improves its dividend prospects for 2021 after closing the first quarter with only a 2.9% drop compared to the same period in 2020.