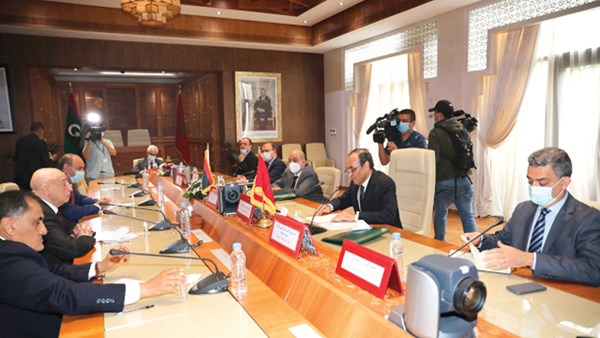 The Kingdom of Morocco hosted meetings of the heads of the Libyan House of Representatives and the state to discuss resolving the file of sovereign positions during the coming period, in addition to supporting the current moves to hold presidential and legislative elections in Libya on December 24 on the basis of an agreed constitutional basis.
Yesterday, the Speaker of the Libyan House of Representatives, Aguila Saleh, revealed that the file of sovereign positions was previously resolved in the Bouznika meetings, pointing to the meeting of two committees from the Libyan House of Representatives and the State under UN supervision to choose sovereign positions.
The Speaker of the Libyan House of Representatives explained in a press conference during the new Libyan talks in Morocco that it was agreed in Bouznika on how to select the sovereign positions, stressing that the responsibility for decisiveness in this regard rests with the “13 + 13” committee.
Saleh indicated that they are committed to the outputs of Berlin and Skhirat, while the other side did not abide by what was agreed upon, adding: “We are committed to all that was agreed upon, and our demands are in line with what the international community demands, and the Second Berlin Conference will support that.” The Speaker of the Libyan House of Representatives pointed out that his country suffered a lot during the previous stage of the division and the spread of armed militias, reiterating the need to respond to the demands of the Libyans for the exit of foreign forces and mercenaries and the holding of elections on time.
In a related context, Moroccan Parliament Speaker Habib Al-Maliki stressed the need to distinguish the current transitional phase in Libya as peaceful.
During his meeting with his Libyan counterpart, the Speaker of the Moroccan Parliament expressed that he belongs to a Libyan Maghreb Arab generation, this generation made us believe in the same values ​​and made us believe in respecting countries on the basis of the unity of the peoples, explaining that stability will not be achieved without the unity of the peoples, adding, “We hope that Libya will be a democratic state.” without any foreign interference.
In turn, a member of the Libyan Supreme Council of State, Saad bin Sherada, confirmed that there is no point in meeting the heads of the Libyan House of Representatives and the State in Morocco due to the presence of a committee formed by the two parties working to resolve the file of candidates for sovereign positions in the country. In exclusive statements to Al-Ittihad, Ben Sherada stressed the importance of holding the presidential and legislative elections in Libya on December 24 without any procrastination, pointing out that calling for a referendum on the draft constitution is very difficult and will hinder the holding of elections in Libya at the end of this year.