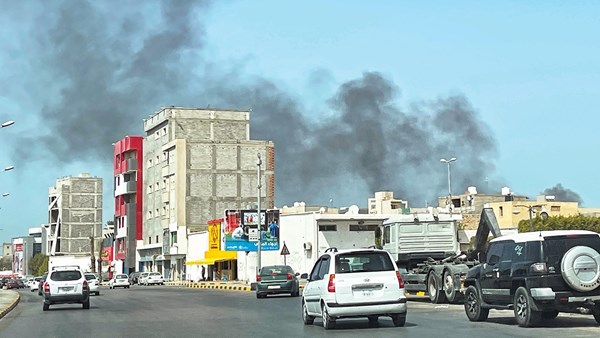 Violent clashes renewed between armed militias in the Libyan capital, Tripoli, in the context of the state of polarization and military alert in the capital, which prompted the militants to mobilize their elements in anticipation of any direct confrontations during this period.
Libyan military sources confirmed to Al-Ittihad that clashes with heavy weapons erupted in the “Salah al-Din” area, south of the capital, Tripoli, between the so-called “stability support” apparatus of the Libyan Presidential Council and the so-called “444th Brigade” as a result of differences between the commander of the Tripoli military region, Abdel Al-Basit Marwan with Mahmoud Hamza, commander of the 444th Brigade.
During the past weeks, the cities of the western region witnessed a state of alert and military mobilization from all armed formations in preparation for any confrontations during the current period due to the regional and international movements that push towards dissolving these formations, rehabilitating them and integrating the moderate elements of them into the security and military institutions.
The commander of the Tripoli Military District, Major General Abdel Baset Marwan, confirmed that what happened “corrected the course of Brigade 444 after noticing the brigade deviated and did not comply with military orders,” adding, “We were surprised to open an account for the brigade, and money amounted to 10 million dinars was pumped to him, and we wrote to the Central Bank of Libya to stop the account, but This did not work because the money was withdrawn,” he said, noting that Lt. Col. Mahmoud Hamza requested permission from the Intelligence Department to travel to Turkey, without the knowledge of the military zone commander in Tripoli.
While Libyan media said that “Brigade 444” is embracing some Syrian mercenaries in the “Yarmouk” area in the Salah al-Din axis, who refuse to leave the homes of displaced people fleeing the capital, in addition to the presence of extremist and extremist elements fleeing from eastern Libya in the ranks of “Brigade 444.”
For its part, the Libyan Presidential Council, as the supreme commander of the army, called on the militias involved in the Salah al-Din region to immediately stop and return to their headquarters without any delay, calling on the Chief of General Staff of the Unity Government, Lieutenant-General Muhammad al-Haddad, to take immediate measures against the commanders of those forces that clashed, Exercising the powers granted to him by law to achieve control over the situation. The statement called on the Military Prosecutor to initiate an immediate investigation with the commanders of those forces and to inform the Supreme Commander of the legal measures taken against him, stressing in the same context the need for discipline and adherence to the instructions and communications issued prohibiting movement without prior permission.
The United Nations Support Mission in Libya (UNSMIL) expressed its grave concern over the continuing armed clashes in Tripoli.
In a press statement, the mission called for an immediate cessation of hostilities, and called on all parties to exercise maximum restraint, reminding them of their obligations under international humanitarian law to ensure the protection of civilians and civilian facilities.
The mission also called on the relevant Libyan authorities to assume their responsibilities in ensuring the protection of civilians and in exercising control over their units in accordance with relevant Security Council resolutions, particularly Resolution 2570.
She explained that this includes initiating a comprehensive and detailed process of disarmament, reintegration and security sector reform with the aim of bringing all weapons under State control. In Rabat, the Speaker of the Libyan Parliament, Aguila Saleh, affirmed that there is no solution to the crisis in Libya except through holding presidential and legislative elections through direct voting, noting during a joint press conference with Moroccan Foreign Minister Nasser Bourita that national reconciliation will not be achieved before the election of the new president in Libya. He added, “There is division, and if elections are not held, the situation in Libya will be worse.”

Malika changes the version on the Mercedes again: “It’s second hand and I didn’t get it at your expense”