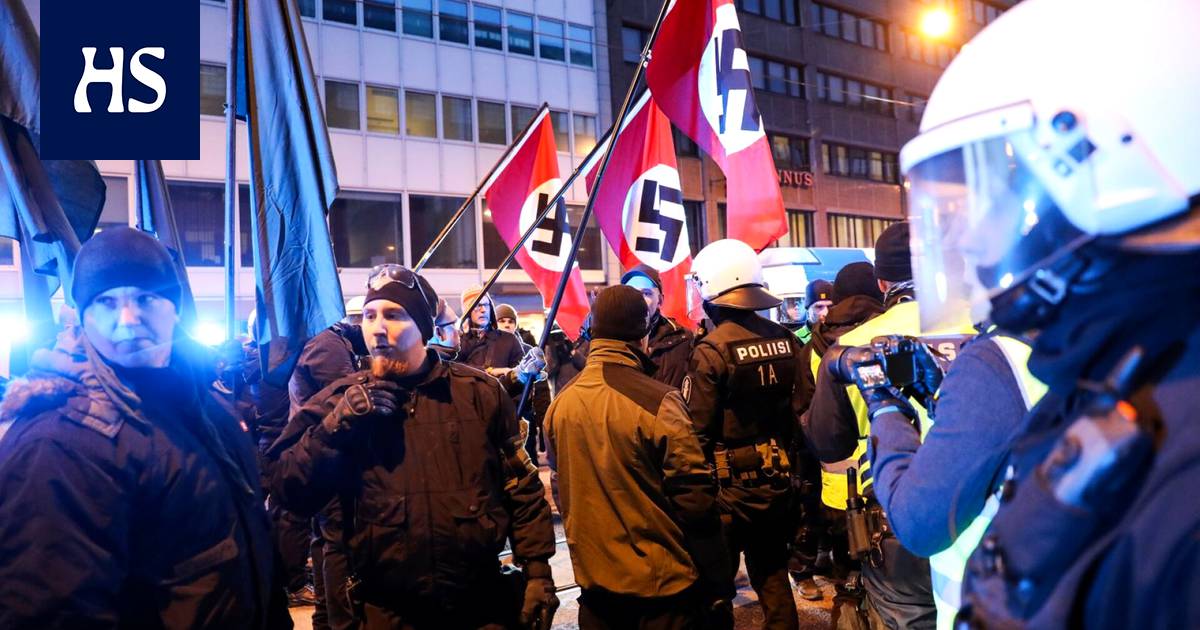 According to the District Court, the swastika flag is not prohibited in Finland. Prosecutor General Raija Toiviainen immediately stated that she wanted an assessment by the Court of Appeal.

Helsinki the district court has dismissed charges against five men for carrying a Nazi flag in a demonstration on Independence Day 2018. The district court referred to freedom of speech and expression.

According to justice, during World War II, the ideology of National Socialism included persecution of the Jews, racism, and the genocide of Jews and certain other minorities. However, this is not enough to convict the wearing of the Nazi flag as incitement against a group of people, as the prosecutor had demanded.

The swastika flag is not prohibited in Finland, the court pointed out.

“Consequently, the respondents have not been shown to have spread an opinion or message among the public that would have threatened and insulted various immigrant groups or claimed that they were inferior to the native population of Finnish society. Nor has it been shown in the case that the swastika flag would send a threatening and insulting message in connection with the fight against immigration, ”the court concluded.

Of justice according to the protesters, the flags were not mere swastika flags but specifically state flags of Nazi Germany. They are thus related to the ideology of National Socialism.

“By carrying swastika flags in a demonstration procession, the defendants have thus sought to spread an opinion or message in line with Nazi Germany and Hitler’s ideology, or at least they should have understood that their conduct was disseminating such an opinion or message.”

Despite this, the act did not meet the characteristics of a crime according to law. Ultimately, it was a question of whether the actions taken against the protesters were proportionate.

The court reviewed the case law of the European Court of Human Rights (EIT). In one decision, the EIT stated that the article on freedom of expression in the ECHR did not protect any expression in support of National Socialism or Nazi action.

The court gave the most weight to the decision against Hungary, which also concerned the display of flags related to Nazi Germany in a demonstration without any threats or violence against anyone.

“As the EIT states in its ruling, the defendants in this case have been entitled to protection against disruption of their assembly when participating in a lawful demonstration. The police had prepared for the situation and there had been a lot of police officers on site to guard the situation, ”the court summed up.

Of justice the defendants thus did not act reprehensibly, at least until they disobeyed the police order to hand over the tickets. In that regard, four men were charged with harming the official.

According to the court, the men’s conduct did meet the characteristics of harassment, but the charge was dismissed because the police had no reason to remove the swastika tickets from the protesters.

Indeed, the court accused the police of interfering in the protest. The police, on the other hand, should have safeguarded the right of the participants in the procession to protest and intervene in the proceedings of the audience following the procession, the right guided.

“There is no explanation in the case that the members of the demonstration procession behaved in a threatening manner, even though the audience who followed the procession from the side made derogatory comments against them,” the court noted.

Prosecutions raising decided last year by the Attorney General Raija Toiviainen. According to him, this is the first time that a swastika flag has been charged in Finland during a demonstration.

The decision of the district court surprised Toiviainen.

“Personally, I think the swastika flag is a pretty strong message. I definitely want an appeal from the Court of Appeal. ”

Toiviainen interprets that in the decision of the district court, freedom of assembly rose to a central position.

He said the protesters were using the flag to try to make public opinion offensive and threatening towards minorities, even though they said nothing in the procession.

“Personally, I even feel that this has been a very powerful shaping of opinion. The incitement clause does not require the likelihood of violence, but the swastika is in itself threatening. ”

Read more: The neo-Nazis were charged with exceptional charges of carrying swastika flags on Independence Day

The procession was based on the neo-Nazi organization Nordic Resistance. The Supreme Court ordered the organization has since been dissolved.

The court ordered the tickets to be returned to the accused. However, tickets will only be returned after the judgment has become final, ie if no one chooses to go to the Court of Appeal.

In the prosecution there were three men carrying flags at the top of the protest procession.

The fourth accused, according to the prosecutor, participated in the act by marching in a procession and assisting in carrying the ticket. In addition, he opposed taking the tickets out verbally and holding on to the tickets. However, the court found that there was no evidence of his involvement in carrying the flag or opposing the police.

The fifth accused acted as the organizer of the protest. According to the prosecutor, he reported the protest to the police, aware that swastika flags were being used in the procession.

Equally a man and one woman were also accused in the same trial of inciting another group of people. It is a demonstration in the vicinity of Helsinki’s Merilahti school in April 2018.

The event included a speech addressed to young schoolchildren and disseminated on the Internet, threatening, slandering and insulting certain groups of immigrant students and young people.

“The district court finds that defamatory and defamatory statements such as those at issue are likely to provoke intolerance, contempt and possibly even hatred towards the target group.”

The man who spoke is also charged with the Nazi flag case.