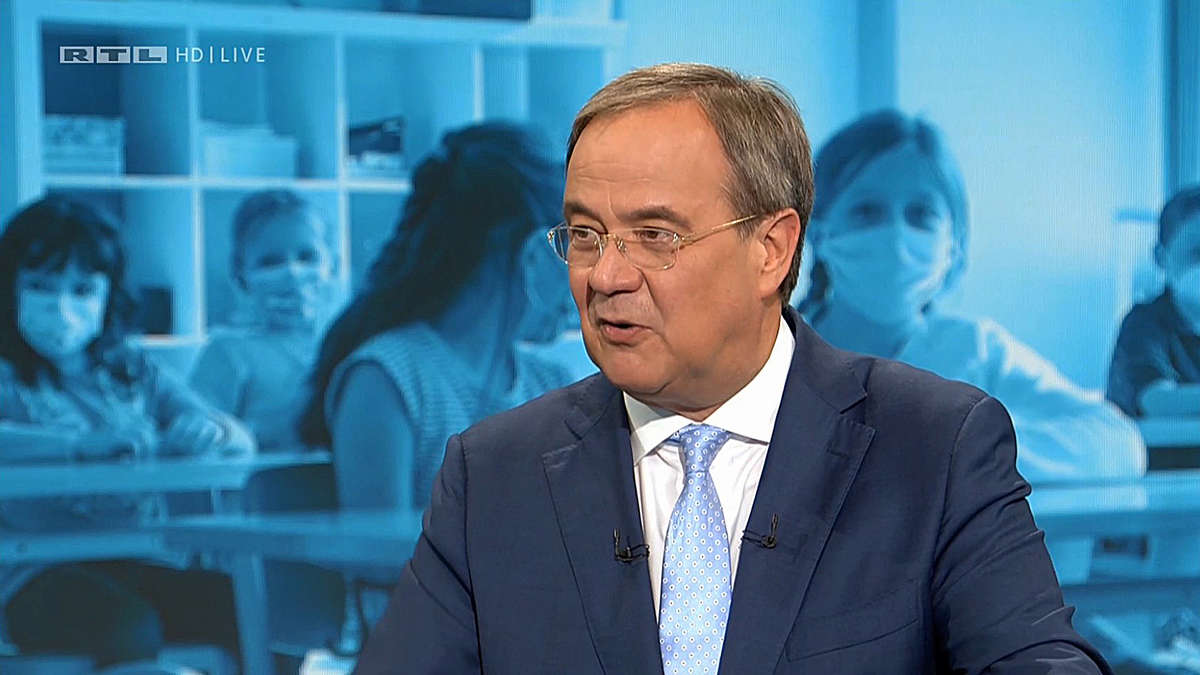 Armin Laschet seems to be the loser of the chancellor’s triad. Probably also because Angela Merkel’s legacy rubs off very unevenly. The Union is now facing a long unthinkable flop, commented Florian Naumann.

Munich – Germany experienced a chancellor triad without major highs and lows on Sunday evening. All the more important are the small nuances – and the astonishing survey figures of the evening. Armin Laschet seems to be the loser of the first TV round. Whether this is really the case is in the eye of the viewer and cannot be measured by a single viewer survey. But there are very plausible reasons for this assessment. And they do not bode well for the Union candidate.

TV-Triell: Laschet gets lost in the closing words of all things – his “promise” does not seem to get through

The closing statement stood out in an uneventful triell. After briefly pecking at the piece of paper, Laschet turned into an indirect quote from pop culture in his closing remarks. And revealed two weaknesses. “Don’t we all feel the wind of change blowing in our faces?” He asked. The phrase comes from the Scorpions turn hit, “Wind of change”. Mistake number one, however: The conclusion in 1990 was of course not to defy change, as Laschet apparently wants to do as a “steadfast man” – but to steer it in the right direction. Nobody should know this better than the Union. At that time, Helmut Kohl seized a historic opportunity for change. There is a lot of arguing about the implementation. But the step towards a new future was the right one. He will not be able to stay away now either.

For Laschet, even worse than the botched reference was the almost desperate self-praise. Laschet wanted to stand out as a rock in the rough sea of ​​change. The polls suggest, however, that voters will not accept this promise from Laschet. Rather, they consider Scholz, who was somewhat pinched, but stoically remembered in style and gesture through the evening, to be this refuge of relative security.

Bundestag election: Laschet does not fit into the attack department, Scholz makes a quiet note of the chancellery

Laschet basically bit his way through the evening. Even his reply to the criticism of his “zigzag course” in the Corona crisis seemed entirely plausible: Yes, there are a few things to weigh up in the pandemic. And you can change your mind for good reasons. Markus Söder, for example, proves that trust can be preserved in an astonishing way: in 2018 still on AfD voters, today the greenest black between Flensburg and Oberstdorf. You can do that, but you obviously have to sell it with bold calm and in binding sentences. Laschet, on the other hand, even staggered through the Triell evening. Basic child security? Not necessary, work prospects for the parents do it! And two minutes later: Of course, the Union also relieves single mothers, just as well as the Greens. The impression: Someone doesn’t quite know what they’re actually trying to sell – social warmth or a tough, competitive society.

Laschet’s demeanor did not appear to be particularly beneficial either. The Union Chancellor candidate obviously wanted to unpack the attack department. A “But Mrs. Baerbock!” Here, a “You are not serious!” For Scholz. But all of this seemed memorized. For example, because the SPD conservative Scholz had already quasi canceled Red-Green-Red at the time of the throw-off, as even the moderators attested more or less resourcefully. Laschet is just not a convincing bunch of people à la Strauss. “Don’t just read out speaking slips!” Even Annalena Baerbock teased. Scholz, on the other hand, can easily remove the somewhat boring, taciturn straight-ahead control.

Laschet as a Triell loser: Merkel apparently rubs off on Scholz – Union threatens the election debacle

Laschet may also have had a triell effect on his feet. Between the two somewhat left-wing Scholz and Baerbock, Laschet did not seem like the self-confident, reliable political center. But like a fickle man struggling quite alone on the wide field. The constellation could have been an opportunity for the CDU boss to raise his profile. However, that doesn’t work if a conservative lets the butter off his bread when it comes to security.

It seems that voters are really looking for stability. But less in a program that is strictly aimed at economic growth than in a politician figure. Scholz can point to government experience on Angela Merkel’s side – and he has apparently learned from the Chancellor. Let criticism roll off, attacks on the competition only in a smug tone, just don’t move too quickly. He also scored better than Baerbock, who had credible doubts about the climate and tax promises of the competition, but seemed a bit too lively for the Chancellery for many viewers. In the survey category “who can lead the country”, Scholz almost achieved a landslide victory.

If Laschet does not personally give his promise of “stability” more credibility, something strange could happen: The political mistakes of the Merkel era (late decisions and lack of concepts, for example) threaten to stick to him – even though he was not part of the federal government. A few literally bad checks in the Union’s election manifesto do the rest. The positive image of the Chancellor as a calm driver, on the other hand, could pass over to her deputy Scholz. Even though the but actually partly responsible for the failures of the government. If this effect solidifies, then the Union is faced with the long unthinkable: going into the opposition. (Florian Naumann)