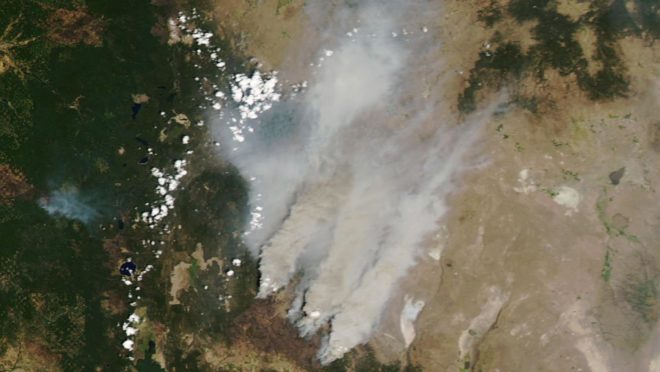 The largest of several active fires in the United States has reached such large dimensions that it already generates its own climatic conditions, which makes the work of firefighters difficult, local authorities informed on Tuesday (20).

The Bootleg fire in southeastern Oregon near the California border has burned more than 157,000 hectares (an area larger than the city of Los Angeles), destroyed at least 117 human buildings, killed animals of breeding, devastated pastures and consumed plantations since it was declared in early July. The flames are being fought by more than two thousand firefighters.

“The fire is so big and generates so much energy and extreme heat that it’s changing the weather conditions. Usually, the weather situation indicates what the fire will do. In this case, the fire is telling what will happen to the climate,” he explained. Oregon Forest Department spokesman Marcus Kauffman.

Only large fires like this are capable of affecting the climate, which further complicates extinguishing tasks, as it is not possible to know how the flames will evolve in the short term.

Satellite images recorded on Tuesday show a huge column of smoke that, from southeastern Oregon, was moving north to the Canadian border, about a thousand kilometers away.

The fire affects a mountainous, vegetative area in the Fremont-Winema National Forest and firefighters believe they won’t be able to fully extinguish the flames until early October.

Authorities say the fire has already hit a huge expanse of Oregon, which is larger than Great Britain, but the impacts on people were not as great because the mostly rural state is sparsely populated. If a fire of that proportion hit the most densely populated areas of California, for example, thousands of homes would have already been destroyed, experts told local media.

Even so, at least 2,000 homes were evacuated and another 5,000 are at risk. At least 70 homes were consumed by the flames, according to the Associated Press.

You Fire effects can be seen in New York, on the other coast of the country, where residents could see the smoke covering the city sky and giving a reddish hue to the sun on Tuesday.

In addition to the Oregon fire, another 80 major fires occur in various parts of the western US, several of them in California, where extreme drought after an almost rainless winter and with high temperatures in recent weeks anticipated the fire season by several months.