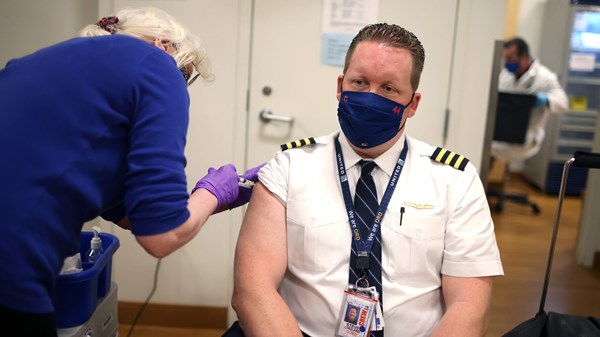 More giant American companies are requiring employees to receive vaccines against the emerging corona virus in order to return to the workplace.
These companies have expressed their willingness to fire workers who refuse to comply with this decision.
CNN has fired three employees who violated this policy and came to work without receiving vaccines against the Corona virus.
Experts say institutions and companies have the legal authority to do so.
As companies prepare to reopen their offices, immunization rates in the United States have stopped at about 50 percent and the number of infections due to the “delta” mutation has risen.
And United Airlines president Scott Kirby, who said in January that he was considering making the vaccine mandatory for his employees, announced that 67,000 workers in the United States would have to be vaccinated by the end of October.
“We know that some of you will not agree to this decision, but we have no greater responsibility towards you and your colleagues than ensuring your safety at work,” he wrote in a letter to employees. “The facts are clear: everyone is safer when everyone is vaccinated,” he added.
Employers are entitled to require workers returning to their offices to get the vaccine, with exceptions for medical or religious reasons, according to the US Equal Employment Opportunity Commission.
“Putting oneself at risk by not receiving the vaccine is stupid, but putting others at risk is unethical and in many cases illegal and should be grounds for dismissal,” said Eric Feldman, professor of health law and medical ethics at the University of Pennsylvania.
Wall Street firms have been lobbying for employees to return to work in person. Investment bank Morgan Stanley and asset management group BlackRock said in June that only employees who have received the Covid-19 vaccine will be allowed to return to their offices.
In Silicon Valley, tech giants Google, Facebook and Microsoft have announced similar rules in recent days.
Also, the company that produces meat, “Tyson Foods”, announced Tuesday that vaccination will be mandatory for all employees, in offices and slaughterhouses alike, from the first of November.
With the number of Delta-related infections rising sharply, Claudia Coplin, the company’s chief medical officer, said it was “the time to take the next step to ensure a fully immune workforce.”
Peter Cappelli, a professor of management at Wharton School, said companies were “waiting to see how many people would do it on their own” before resorting to forcing the order on them.
“So many people thought it was legitimate to object to the vaccine, which made employers worried that they might come under political pressure to do so,” he added.
Retail chain Walmart, the nation’s largest private employer, has made vaccinations mandatory for its head office employees, but not for workers in supermarkets and warehouses.