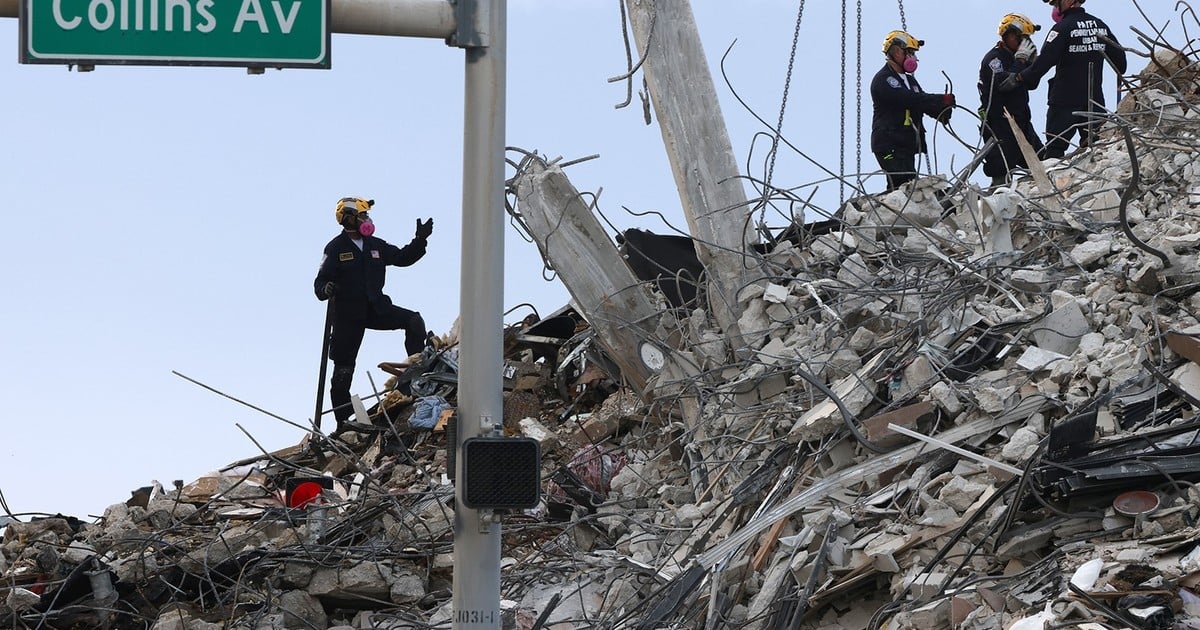 Rescuers have been searching for new rubble since Monday after the last part of the condo that collapsed 10 days ago in Surfside, Miami, was demolished. However, they face a new challenge: thunderstorms that hit the area with the arrival of Tropical Storm Elsa in Florida.

Heavy rains were forecast for Surfside this Tuesday as Elsa strengthened and will likely become a hurricane again before making landfall between Tampa Bay and the Big Bend stretch of coastline and crossing the north of the state.

Crews can work in the rain, but thunderstorms Isolated have forced them to suspend work from time to time, and a parking lot where they were working under the rubble was flooded.

The demolition allowed to inspect previously inaccessible areas, including rooms where people are believed to have been sleeping at the time of the disaster, authorities said.

Four more victims were found in the new pile of rubble, Miami-Dade Fire Department Deputy Chief Raide Jadallah told their families, bringing the number of confirmed deaths to 28. Another 117 people are still missing.

Sunday night’s demolition was crucial in search and rescue efforts, authorities said, and increased the possibility that crews could speed up their work and increase the number of first responders at the scene. However, the possibility of finding survivors 12 days after the crash of June 24 continues to decline.

“We know that every day that passes it is more difficult for a miracle to happen,” said Maggie Castro, a firefighter and paramedic for the Miami-Dade Fire Department, who reports the status of things to family members daily.

The teams had not been able to enter the areas closest to the structure that had been left standing due to its instability, said Miami-Dade County Mayor Daniella Levine Cava.

“We really couldn’t go on without tearing down this building,” he said at a press conference.

Some of the previous debris also helped keep the structure standing, said Ignatius Carroll, captain of the City of Miami Fire Department rescue corps. Rescuers they keep hope reuniting victims with their loved ones.

“We remain focused on our main mission, which is not to leave a single stone unexamined,” say firefighters. Photo: Reuters

“We remain focused on our main mission, which is not to leave not a single stone unexamined and find as many people as possible and help give some answers to family and loved ones, or provide some kind of closure, ” Carroll said.

Florida Governor Ron DeSantis noted that new areas being accessed include the main rooms, in which it is believed that people were asleep at the time of the collapse.

“We will be able to access all parts of that pile of debris, which we have not been able to do until now,” DeSantis said. “I think this is going to speed us up.”

Rescuers could be seen scaling the ruins Monday alongside heavy machinery collecting debris. Jadallah said the first responders focused on a flight of stairs, but bad weather it hampered the search, especially in an area of ​​the parking lot that was filling with water. Crews had to pump it up.

The most recent forecasts indicated that the storm was moving west, largely avoiding South Florida. However, there are thunderstorms in the area near the landslide, and the National Weather Service issued a thunderstorm watch for Miami Beach, which is near Surfside heading south.

Jadallah said the first responders planned to continue their work.

“Now that we have no problems with the structure, the only thing that will stop us it’s the rays”, he assured.