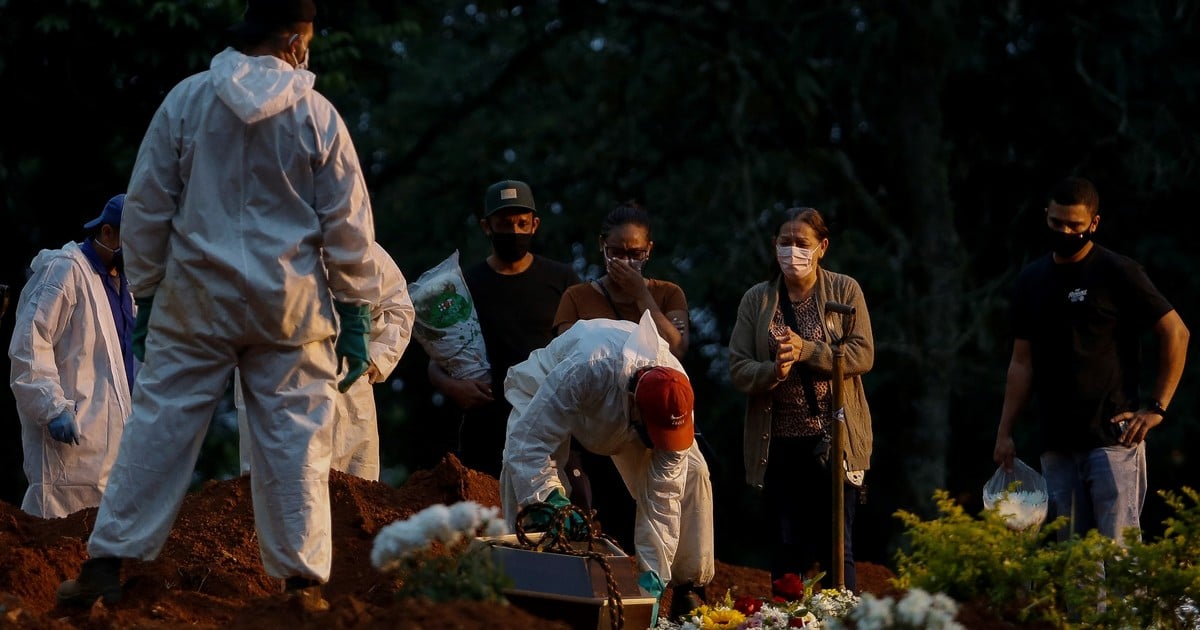 The second wave in Brazil is much worse than the first, according to official data. The indicator that measures the tragedy is the exponential growth of burials, the transfer of remains and the collapse of cemeteries, where they dig graves day and night and even exhume bodies to make more room. To this picture is added an incessant rise in infections and the worrying deficit of medical supplies with cities that have run out of sedatives to intubate those interned in intensive care.

In Vila Formosa, near the megalopolis of San Pablo, the largest cemetery in all of Latin America, up to 300 graves are dug per day against 60 from the previous wave that began in February 2019. Brazilian cemetery services hired new staff and bought machinery due to overwork, but the situation remains overwhelming.

“We are in the worst moment, with the highest number of deaths and cases, which indicates that April will still be very bad, “said epidemiologist Ethel Maciel, professor at the Federal University of Espírito Santo.

At 6 in the afternoon the night shift begins in Vila Formosa with work with excavators, lighted shovels by reflectors driven by generators and a strong smell of diesel in the air.

With about 300 burials a day (almost triple the number in the first wave), there are now six excavators to dig 200 graves a day. 50 vans were hired to transport the bodies, making up for the shortage of hearses. The municipality of San Pablo has denied the rumors that spoke of school buses hired to transport coffins.

Faced with this situation, the largest city in this country began its efforts to free the largest number of ancient tombs and make room for those who are dying from the virus, because according to studies, 80% of people who are admitted to an intensive care unit die.

In the Vila Nova Cachoeirinha cemetery, the white hazardous materials suits are a common denominator and are carried by people who collect the skeletal remains to transfer them to another place, while some families, crying, say goodbye to their loved ones.

“The pandemic is totally out of control and the possibility of reaching 4,000 deaths per day is very real as of this week. The prospect of reaching half a million deaths in July is already plausible, “added epidemiologist Maciel.

“In Brazil, the federal response has been a dangerous combination of inaction and malpractice,” wrote a team of scientists led by Marcia Castro, from Harvard’s TH Chan School of Public Health, and experts from the University of São Paulo and from other locations in a report recently published by Science. President Jair Bolsonaro has been a denier of the pandemic, which he has described as a “little flu.”

At least 17 of the 26 state capitals of Brazil they are on alert Due to the lack of supplies and relatives of the patients, they revealed that in some places several patients came out of intubation without sedatives.

In the midst of this crisis, cities like São Paulo and Rio de Janeiro announced a relief from harsh restrictions that they imposed to contain the pandemic, although night curfews are maintained as well as the limit of hours for businesses.

The State of São Paulo, the most populated and affected by the coronavirus, it reopened its churches and shops this Sunday after just over a month of restrictions, despite the pandemic continuing to accelerate. This reopening is the beginning of a de-escalation that will continue next week and that aims to prop up economic and social activity, partially interrupted since last March 6 in a state that is the industrial heart of Brazil and represents 30% of the country’s GDP. .

However, there will still be a night curfew between 8:00 p.m. and 5:00 a.m. and restaurants, hairdressers and gyms will remain closed at least until April 24.

The decision to relax the restrictions was adopted despite the fact that the pandemic does not relent and all of Brazil is going through its worst phase. The situation has worsened in recent weeks, even for circulation throughout the territory aggressive new variants of coronavirus that have brought hospitals to the brink of collapse. Brazil is the second worst hit country on the planet after the US.

Roberto Carlos: "The Super League? We will do what they tell us ..."