Lack of medicines, femicides, unemployment: the deterioration of life in Mexico 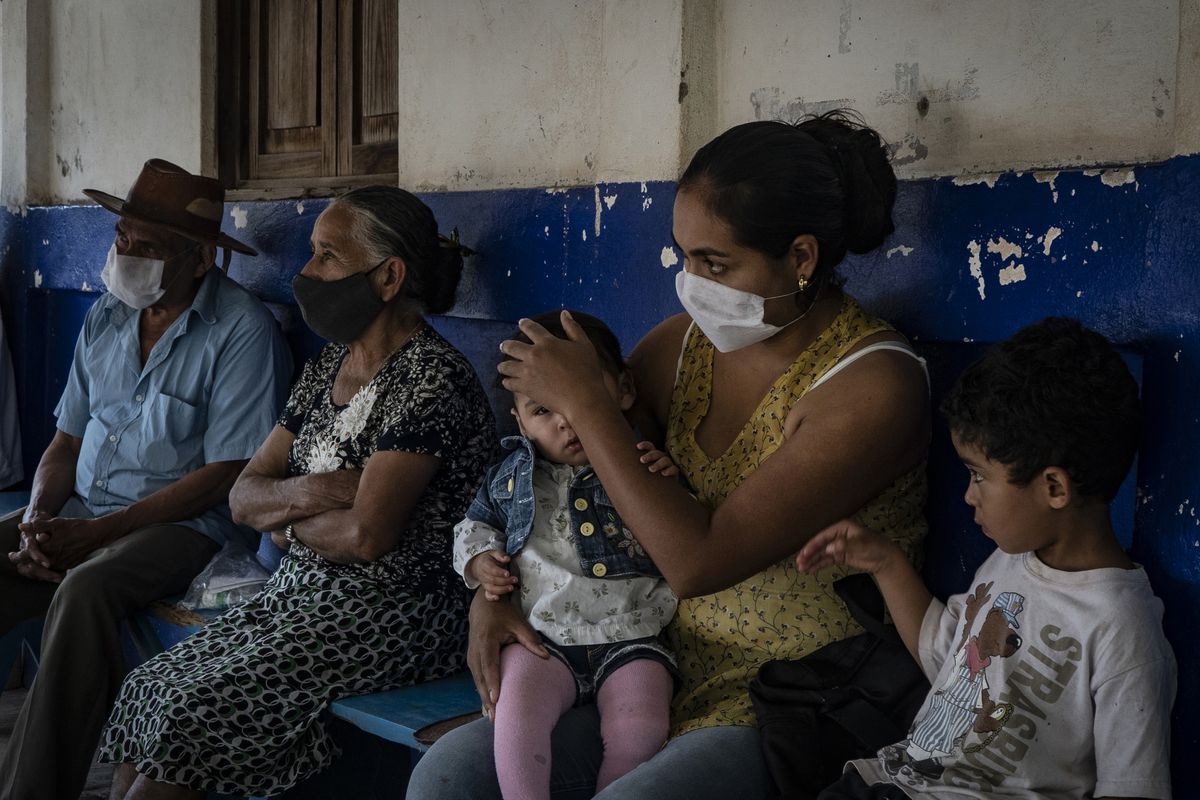 It goes from the subtle to the obvious. It is in the leaks of the International Airport of Mexico City, in the potholes of the federal highways, in the academic dropout. It is also in the fear that grows within women in Mexico of being violated, both on the street and at home. He is in employment, increasingly precarious, and in difficulty finding medicines. In recent years there has been a deterioration in the lives of 127 million Mexicans, caused, in part, by the covid-19 pandemic; for adjustments to the spending of the Government of President Andrés Manuel López Obrador and for the inheritance left by the previous Administrations. The data backs it up: figures collected by the Government itself and the National Institute of Statistics and Geography (Inegi), and analyzed by independent organizations, show that there has been a detriment to health, safety, infrastructure, well-being and employment.

The shortage of medicines, including chemotherapy treatment for children with cancer in the country, has been perhaps the most visible symptom of the deterioration in the Mexican health system, but it is not the only one. Hospitals suffer from lack of maintenance and shortages of drugs of other types, not only oncological.

An investigation carried out by the civil organizations Impunidad Cero and Justicia Justa, for which they consulted initiatives and law reforms as well as internal documents, shows that the shortage of medicines occurred after the Federal Government, in a confrontation with distribution companies, defenested the purchasing system of the Mexican Institute of Social Security without a pilot plan or strategy to replace it.

With the disappearance of Seguro Popular, by decision of the Federal Government, the population that was said to benefit from a public health institution decreased by 14.7 million people – from 102 million in 2018 to 87 million in 2020, according to the civil organization Center for Economic and Budgetary Research (CIEP). Due to lack of money, because they had self-medicated or because it was not necessary, the number of people who did not seek health care when they fell ill increased by 5.4 million people between 2018 and 2020.

The perception of security in the country has improved slightly in the last year… Among men. According to the results of the most recent National Survey of Urban Public Safety by INEGI, 66.6% of the population aged 18 years and over consider that living in their city is unsafe. The percentage represents an improvement over the 68% registered in December 2020, but the perception of insecurity among women has been persistently high. In June, 71.3% of women said they feel unsafe in their city, compared to 60.1% of men.

At the beginning of the year, the Federal Government reported that in 2020 cases of intentional homicide fell 0.4% compared to 2019, a trend that continues so far this year. That is, according to the most recent data from the National Security Commission, malicious homicides have remained at levels similar to 2019, without major increases. The problem is that 2019 has been the most violent year for the country, if measured by the number of homicides.

In addition, the pandemic worsened the situation of family and gender violence. While homicides in general have been sustained, in the first five months of the year femicides have increased by 7.1% compared to the same period of the previous year, according to the Secretary of Public Security in a press conference in June. From January to May, 423 women have been murdered because of their gender. Violations also increased, by 30% compared to the same months in 2020. For its part, the National Public Security System registered 326,634 cases of gender violence in one year, between May 2020 and the same month in 2021.

Federal highways, hospitals and, particularly obviously, the Mexico City International Airport, have deteriorated in the last three years due to lack of maintenance. Thousands of schools, empty by the pandemic, have suffered more than 7,000 theft of school supplies and looting of pipes and cables, among other materials.

Beyond the pandemic, this deterioration in the infrastructure that is part of the daily life of Mexicans, has to do with two decisions by President López Obrador. The first is that the president has assigned the army, through the Secretariat of National Defense, the construction and maintenance of many Federal works, including banks, an extension of the airport in Santa Lucia and irrigation canals, among others. Not only is the Army not a specialized construction company, but it is also in charge of tasks such as airport and customs administration, installation of ATMs in the network of the new Banco del Bienestar, planting trees and detention of migrants.

The second decision of the president that contributes to this deterioration is to have cut spending to prioritize his emblematic works, such as the tourist Train Maya and a refinery in his native state of Tabasco, allocating most of his infrastructure budget to them. In addition, it has given preference to injecting resources into the troubled Petróleos Mexicanos, the world’s most indebted oil company. This has resulted in a considerable drop in public investment, the engine of the economy.

While private investment contracted almost 5% in the first quarter of the year and compared to the same quarter the previous year, public investment showed greater weakness, with a drop of 6%. According to an analysis of quarterly data by specialist Eugenio Sánchez, since López Obrador’s administration began, neither public nor private investment has grown. It is, so far, the only presidential term in which there have been nine consecutive quarters of declines in investment and the one with the steepest declines. According to his estimates, during the first quarter of 2021 public investment was 33% lower than that of the last quarter of Enrique Peña Nieto’s administration and 61% lower than its historical maximum, reached in 2010.

“Investment represents a fundamental engine for the economy, since it allows companies and economic activity to grow, become more productive and generate more jobs for the population,” the independent research center Mexico How Are We Going? (MCV). “In the crisis caused by the Covid-19 pandemic, the government has not used investment as a countercyclical measure for economic recovery. Public investment as a percentage of GDP is at its lowest levels for a first quarter of the year since 2001. In contrast, in crises such as 2008-2009 there is a strong boost from government investment “, added the organization experts.

The measurement of well-being is still an open topic in academia, but MCV offers an approximation: the social progress index (IPS). The indicator takes into account factors such as access to water and sanitation, nutrition, access to information, and personal and choice freedom, among others. The latest report for 2020 shows that between 2011 and 2020 the index has risen, but this increase has slowed in recent years. Between 2015 and 2020, the score increased by 1.02 points, while, between 2011 and 2015, the increase was almost three times higher, of 2.48 points.

“The sharp decline in the Mexican economy as a result of the crisis caused by Covid-19 in 2020 will inevitably wreak havoc on the well-being of the people and on the social progress of the country,” say the authors of the MCV report, “which it will be reflected in the next editions of the Social Progress Index ”.

If access to education is considered as a source of well-being, the pandemic has already had a negative impact on this area. Inegi revealed in March that more than five million students did not enroll in the current school year for reasons related to the crisis unleashed by the pandemic. In the current school year, the institute said, 32.9 million students enrolled, that is, 60.6% of the population between 3 and 29 years old.

With the publication of the data collected by INEGI in the National Survey of Occupation and Employment, a bleak outlook for employment in Mexico came to light. Of the jobs that were lost due to the forced confinements of the pandemic, 2.3 million remain to be recovered. The voids are found, for the most part, in urban areas. State of Mexico, Mexico City and Quintana Roo have been the most affected states, while in the north and the Bajío area, jobs related to foreign trade have already recovered. This has exacerbated inequality in the country.

For everyone, however, employment has gotten tougher. The survey shows that 25% of the economically active population works in inadequate conditions, either because they work more than the recommended hours or because the work is now less paid than before the pandemic. This compares with the historical average of between 12% and 13%, according to the Centro de Estudios Espinosa Yglesias (CEEY).

Perhaps one of the most widely celebrated decisions of President López Obrador has been the increase in the minimum wage, which he has made by decree since he assumed power at the end of 2018. This had undoubtedly begun to positively impact working poverty, which refers to having an income that is not enough to buy the basic food basket. In 2019 there was a slight drop, however, the pandemic erased the gain and made the situation worse. According to an analysis by CEEY, 13 million Mexicans fell into working poverty due to the pandemic.