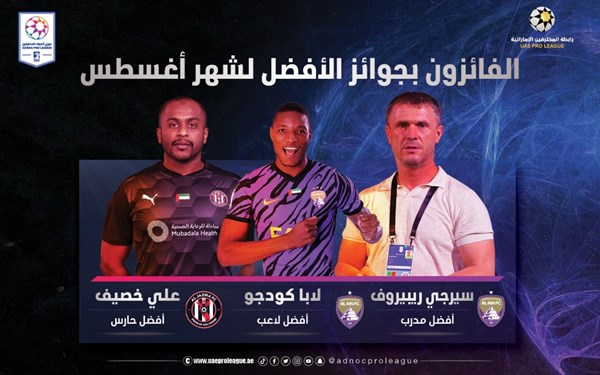 Abu Dhabi (Etihad)
The Professional League announced the names of the winners of the monthly best prizes in the “ADNOC Professional League” last August, with the Togolese Laba Kodjo, Al Ain striker, winning the Best Player award, the Bulgarian Sergey Rebrov, Al Ain coach, the Best Coach award, and Ali Khaseef, Al Jazira captain, the Best Player award. A goal keeper.
The victory of the trio came at the conclusion of the vote, which lasted over the past 48 hours, through the website and official application of the Professional League, amid a great turnout from the masses.
Lapa Kodjo’s victory came, after he launched strongly last August, and contributed to his team’s victory in the first two matches that month, after he scored 3 goals, and had a prominent role with the team, to outperform his competitors in the list of candidates: Majid Hassan “Shabab Al-Ahly”, the Brazilian. Joao Pedro “Al Wahda”, Bandar Al Ahbabi “Al Ain”, and Tolani Serero “Al Jazeera”.
As for Ali Khaseef, he managed to keep a clean sheet in the first two matches, to contribute to a positive start for the title holder, Al Jazira, and outperformed his rivals in the nomination, Adel Al Hosani (Sharjah) and Majed Nasser (Shabab Al Ahly).
Coach Sergey Rebrov, who led Al Ain to a perfect start, outperformed his competitors in the list: Mahdi Ali, Al Ahly youth coach, and Abdulaziz Al Anbari, coach of Sharjah.