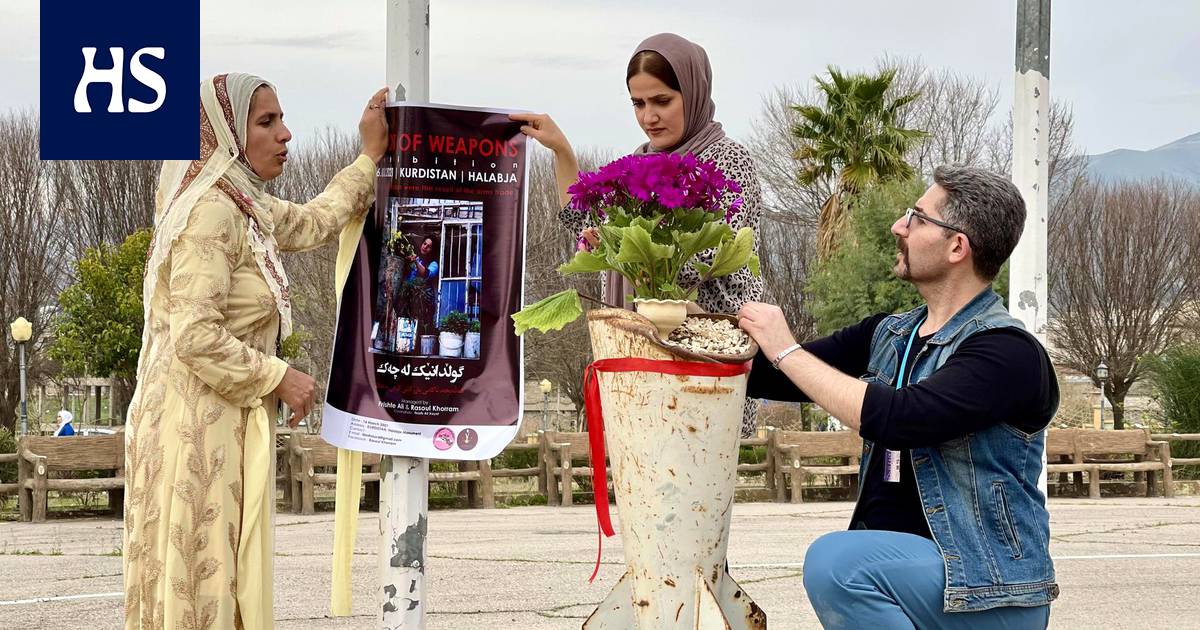 About 5,000 civilians were killed in the Halabja gas strike in March 1988.

“The message of the exhibition is this: the world needs flowers and the world needs peace,” Khorram says by phone from the city of Halabja. “We don’t need weapons anymore – enough, enough.”

Tuesday the open exhibition has gloomy backgrounds. It is exactly 33 years since the dictator Saddam Hussein led by Iraqi forces made a horrific gas attack on Halabja.

Mustard and other poison gases killed about 5,000 civilians, including many children. In addition, thousands were seriously injured. The Halabja gas strike was one of the worst chemical weapons attacks in history.

“The Halabians say that then we were alone in the world,” Khorram says. “The Halabites say it was a genocide and no one has compensated them.”

Rasoul Khorram is together with his comrades Frishte Alin with collected rocket parts from the Halabja area. According to Khorram, the scrap comes from the March 1988 attack.

Rocket scrap has been recycled as pots. They are planted with flowers. Rocket pots are placed on the Halabja Memorial Square, where residents will gather to commemorate what happened on this anniversary as well.

The Rocket Pot exhibition is at the Halabja Gas Strike Monument.­Picture: Rasoul Khorram

The Khorram and Ali exhibition has been supported by the Halabja Gas Shock Victims Association and the Kurdish Diaspora Center.

Kurdish otherwise in a difficult history Halabja has the darkest figures.

The Kurds are a people of about 35 million who live mainly in the territory of four states. These are Turkey, Iraq, Iran and Syria.

Wars, rebellions and persecution have driven millions to other parts of the world as well. In many cases, Kurdish groups have also come together.

The Kurds have never had their own state, but the Kurds dream of an independent state.

“We want to build our own Kurdistan,” Khorram says. “It’s a Kurdish dream all the time.”

Rasoul Khorram from Helsinki is born in the Kurdish region of western Iran from a place called Oshnavieh.

Kurdeja combines the Kurdish language and its own culture. The majority of Kurds are Muslims, but minorities include Christians and Jews.

For the states in the Kurdish-populated area, the quest for independence is a red garment.

Rasoul Khorram gives a recent example of the reactions that Kurdish activities can cause.

“When the Pope Franciscus traveled to Iraq, Kurdistan issued a stamp on it, and many Turks, Iranians and Arabs are angry about it. ”

In early March, the Pope held a fair in Erbil, Kurdistan, Iraq. Draft stamps were issued in its honor in the Kurdish region. One of them had a picture of the pope and in the background a map of Greater Kurdistan that spans the territory of the four states.

Halabjan the consequences of the gas shock still feel strong. Rasoul Khorram tells the story of his friend’s father, from whom the gas stroke took his sight.

According to Khorram, the consequences of the gas shock also include that surviving victims are at risk for the coronavirus.

“Many of them have died during the corona.”

The remnants of the rockets come from the Halabja area.­Picture: Rasoul Khorram

That sure does sound like Ramsay Bolton in Total War: Warhammer 2