Koeman: The “collapsed project” will not affect Barcelona 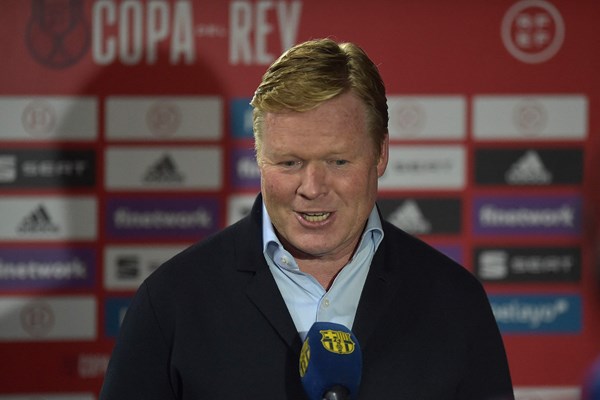 Barcelona coach Ronald Koeman does not believe that his team’s participation in the collapsed European League project will have an impact on his chances in the Spanish football league title this season.

Barcelona was among 12 elite clubs – three of them from Spain – who participated in the announcement of the controversial new continental competition on Monday.
last Sunday.
But by Tuesday evening, the competition project collapsed, competing in the Champions League, after the “Big Six” withdrew in England and others followed.
It was reported that Barcelona was studying its position before the position of Manchester City, although it was not announced that the Catalan club had withdrawn from the project by Wednesday, when Koeman confronted the media, to talk about Barcelona’s match with its guest Getafe tomorrow, Thursday, in the Spanish League.
Barcelona is facing Getafe, and is currently in third place in the competition’s ranking, five points behind Atletico Madrid, the “leaders”, and two points behind its traditional rivals Real Madrid, the “title holder”, who is in second place, with Koeman’s team having a postponed match.
Although both Atletico and Real were also part of the Super League’s plans, journalists asked Koeman about the possibility of his players being distracted as they strive to win the Spanish League.
Koeman replied, “I do not agree, the players want to win titles, I have no doubts about them. We will be fine for tomorrow’s game.”
Although Andrea Agnelli, the Italian Juventus president, who was considered one of the main figures in the Super League, admitted defeat in his separatist attempt, Koeman was reluctant to comment on Barcelona’s situation, saying, “Nobody knows what could happen.”
“I spoke with Juan Laporta,” the president of Barcelona, ​​”yesterday, and he explained the club’s position, Coman said.
The Dutch coach added, “There was such a big movement that it is better not to make an opinion. Nobody knows what will happen and we have to wait. I want the best for the club.”
“I am not surprised, we want the best for the club,” he said. “If there is anyone who needs to talk about this, it is clear that he is the president.”
Even those coaches who are critical of the Super League – such as Germany’s Juergen Klopp and Spain’s Josep Guardiola – have highlighted problems with UEFA, which is pushing ahead with expanding the Champions League.
“Everyone talks about the European Super League and the Champions League,” Koeman said, but “UEFA” does not pay attention to the players about the number of matches, all they care about is money. “

Life is Strange: True Colors and how it will offer diversity in video games | EarthGamer

What a mess! Tourists left in the dark

Cynthia Khalifa: “Nadine” is a composite character who combines good and bad