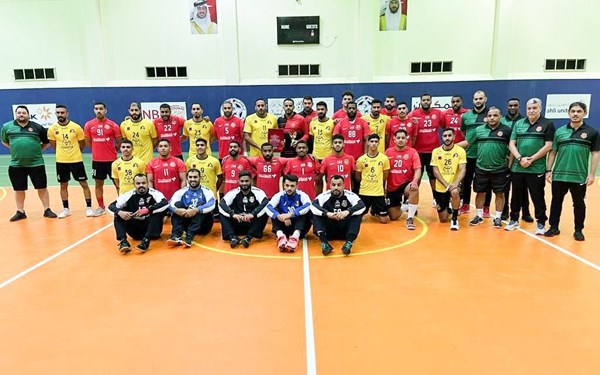 Al-Ahly youth handball finished the external camp in the Bahraini capital, Manama, in preparation for the local benefits, which were started by the “Al Fursan” in the Emirates Men’s Cup.
The match was attended by Lieutenant-General Mohammed Ahmed Al Marri, Chairman of the Board of Directors of the Sports Sector, Sheikh Abdul Rahman bin Mubarak Al Khalifa, Chairman of the Board of Directors of the Bahraini Najma Club, accompanied by Major General Talal Al-Shanqiti, Vice Chairman of the Board of Directors, Ali Issa Ishaqi, President of the Bahrain Handball Federation, and Majid Sultan, a member of the Board of Directors. Executive Director, and Majid Ahli Board Member.
Mohammed Ahmed Al-Marri thanked the Board of Directors of Al-Najma Club for the hospitality and the reception of the camp of the hand men’s team in Bahrain, praising the facilities of the club’s hall and providing all means of comfort for the handmen team in the camp.
Al-Marri was keen to meet the players and the technical staff, and urged them to make more effort and develop their level to benefit the team and the club, and to provide a high technical level during the season, in various tournaments that satisfy the aspirations of the public.
On the other hand, Maliha will meet Al-Wasl in Maliha hall, in the third round of the first group of the Emirates Cup for Men, while Al-Ahly youth are waiting to face Sharjah October 18, at the end of the group matches, after playing against Al-Wasl and Maliha and winning both matches.