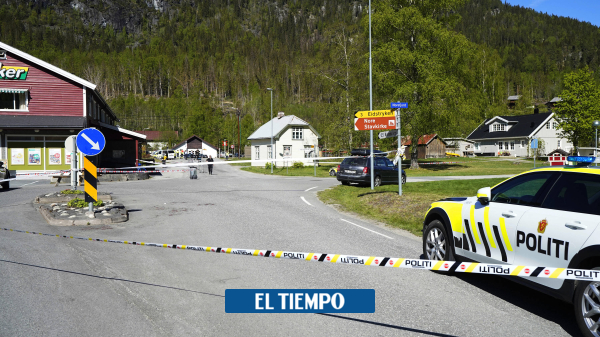 At least three people were injured, including one seriously.when a man attacked his wife with a knife this Friday in a town in southeastern Norway.

The incident, which was initially described by police as an “indiscriminate” attack, took place in Nore og Uvdal, a town of less than 3,000 inhabitants in the Numedal valley.

(Also read: Shooting at a school in Germany leaves at least one person injured)

“We can confirm that there was a family link between the perpetrator of the attack and one of the stabbed people,” inspector Odd Skei Kosvteit said in a statement.

“It is a family from Syria, and the author and one of the injured are married,” he added.

The wife was taken to a hospital by helicopter, in a “critical” condition. and another man, whose identity was not specified, was slightly injured.

The alleged attacker was also slightly injured but did not have to be hospitalized, said a police official, Tom Richard Jensen, at a press conference.

See also  Columns The sequel to a single life is completely classless in many ways, and yet I and many others devour each episode freshly - here’s the secret to the scorned series

The police did not provide details on the causes of the incident but, according to the TV2 network, the suspect was the subject of a complaint for sexist violence filed last November and was being investigated.

The man was prohibited from visiting his wife, reported that channel, and to date had complied with the order.

(You may be interested: They ask for a life sentence for a Russian tried for war crimes in kyiv)

Police cordon off the area of ​​the attack.

Several people tried to contain the alleged perpetrator of the attack, that occurred near a bus stop, between a supermarket and a high school, until the rescue services arrived, the police said.

“I am not aware of previous threats,” the municipality’s mayor, Jan Gaute Bjerke, told TV2. “These types of episodes usually happen like lightning in a blue sky.”

“We confirm that there was an incident near the school,” the Numedal school said on its website, indicating that “health personnel and police officers” arrived at the center.

The region where the attack took place is located a little north of Kongsberg, a city where a bow and arrow attack left five people dead last October.

Its author, a Dane with psychiatric problems according to experts, has been on trial since Thursday in Norway.

Monkeypox: WHO convenes extraordinary meeting due to increase in cases

The return of the emeritus king makes the Spanish Crown uncomfortable

Guitarist obsessed with Ted Bundy is convicted of brutal murder

Four people injured in a knife attack in Norway